Spooky & The Truth find a musical home in Rochester

“The truth is fluid,” says singer-songwriter Riley Fressie, a k a Spooky Mulder. “It’s different every time and with that — being a songwriter and trying to do original music — it helps. I can’t bang out a new song every night. What's going to keep people interested?”

Whether working as a solo operation or with any manner of backing band, Fressie was constantly confronted with questions about the truth behind his music. More specifically, how does he describe his sound?

“City folk,” he says. “We’d get questions: ‘What’s your genre?’ ‘What music do you play?’ City Folk.” It’s also the name of Spooky & The Truth’s latest album, released last August.

Fressie’s knee-jerk reaction to the inquisition was to reply that it was folk music, but that conjured images of Bob Dylan and music played by older white men. That wasn’t bad, but it wasn’t an accurate portrayal of Spooky & The Truth, who truly come off on the poppy side of Americana. Hence the term “city folk.”

Fressie met his musical cohort Andrew Nittoli, a k a Chubbs, at the University of the Arts in Philadelphia before learning they had both started out in Rochester. Whatever the lineup, Spooky & The Truth has these two musicians as constants.
Nittoli is the band’s utility guy, a musical Swiss Army knife of sorts. On the album “City Folk,” he contributed with keyboards, drums, and production.

After playing a month-long European tour in 2018, Fressie and Nittoli returned to Rochester with the band. It beat touring New England and sleeping in Walmart parking lots, as Fressie did for a while until things clicked with the band.

“We came back to Rochester to play a couple of shows, and saw all the opportunity here,” Fressie says. “There wasn't a ton of young original bands. I know they're probably out there, I just haven’t found them yet. It’s not as saturated as Philly. We were kinda stuck. In Philly, you’d get 50 bucks to play three hours, and if you said ‘No,’ the next guy would say ‘Yes.’

“Rochester has an audience that was really receptive to what we were doing,” he says. “It was almost as if they themselves were looking for it, so we set up shop here.” 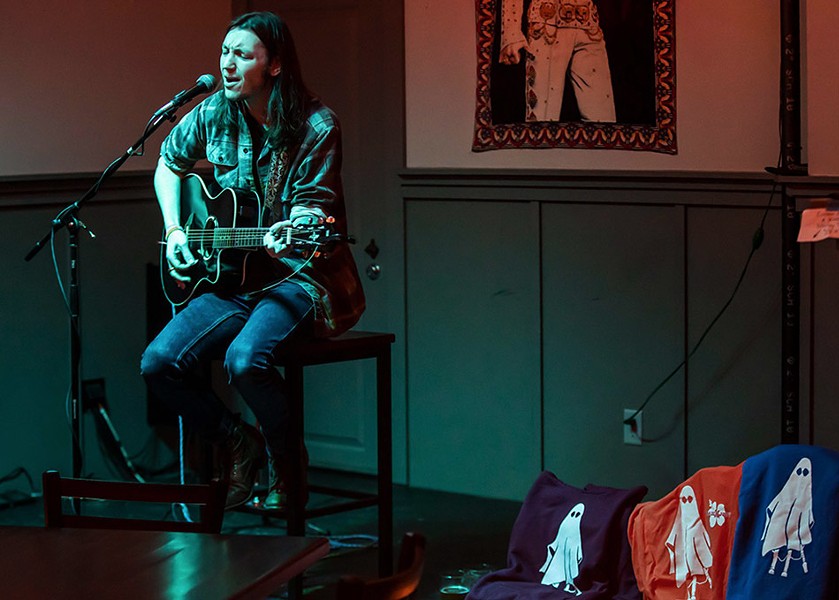 Spooky & The Truth’s songs are pretty little vignettes but not too purple, precious, or complicated. They’re inviting, and not at all dismissive.

"I write the songs and my fellow bandmates or the studio musicians make it come alive. With that feeling, they have a more city, more communal kind of folk.”
Sometimes Fressie writes the songs. Other times, he is the song.

“It is an exploration of how a song can mean something different over time, or over the times that you hear it,” he says. “I wrote some of these songs years ago, probably about a girl or about heartbreak or something I was going through at that moment. But then I revisited and there was a day of clarity where whoever I was talking to, whatever the subject was, it automatically turned into me. So if I was talking about a girl running away, what I wrote about it automatically turned into me. Then when I was recording it and it was me running away, and it was more empowering.”

Fressie says writing songs and finding truth can be easy, and that you should try it.
“Anyone can do it,” he says. “I was surprised. I’m still surprised that I could do it. And it’s super good for the soul to sit down with your thoughts and just do it. It’s folk music. It’s our music.”