There's a perception that west side food doesn't match east side offerings. There might be some history behind that.

At least, that's the stereotype, reinforced in the minds of those who entertain it every time a Chili visitor complains about small portion sizes or a Pittsford sojourner snuffles at a wine menu. Let's just say, right up front, there are snobs on the west side of the Greater Rochester Area. And there are east side diners who refuse to accept something because it falls afield of their daily meat and potatoes. People are just people, regardless of geography — and yes, Jeremiah's has west side, city, and east side locations, and Bee Sting sauce is teaching the world to sing.

With that out of the way, different food and drink options are afforded to the different sides of the Genesee, and the levels of hype just don't match.

We hear about a parade of new places opening in the city, particularly on the east side and in the eastern suburbs. Buzzwords like "gastronomy," "mouthfeel," and "mindfully sourced" get tossed around like duck meat in a cassoulet, or if you like, tater tots in wing sauce. From the west side, we hear relatively little. A craft brewery may open to local acclaim, but limit your Yelp search to "Hot and New" and (aside from Chick-fil-A) there tends to be more buzz on the east side.

So, what's going on? Are new places just not opening up? If not, why not? Or is there actually an east side conspiracy to keep the press firmly entrenched? 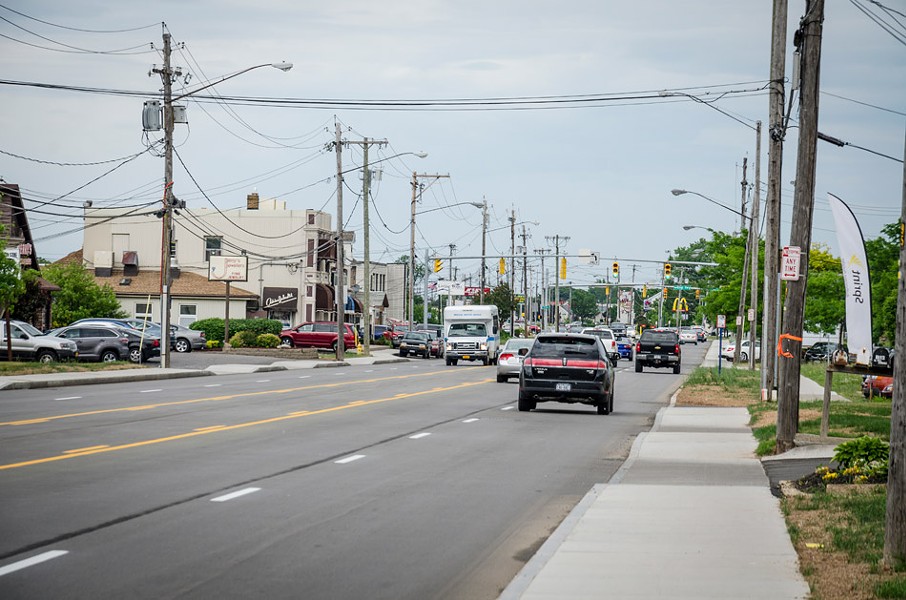 If you go back to the early days of Rochester, there was East Avenue and West Avenue (now West Main Street) branching out from the Genesee River. Based on "East Side, West Side: The Development of East and West Avenues in Rochester," an online pathfinder published by the Central Library of Rochester and Monroe County, historian Blake McKelvey called East Avenue the "Avenue of Presidents" because of the number of business magnates that lived there. Their names are as familiar as their mansions, which still populate that picturesque promenade. Sibley, Powers, and of course, Eastman were some of the first real east siders.

The west side was much more middle class. And that's not to say it wasn't full of extraordinary people — Susan B. Anthony lived in a relatively modest house on the west side of the city. The library's business directory for her neighborhood reveals railyards, canal yards, a prominent carriage factory, and small businesses like tobacconists, bakers, and druggists.

Today, there's some debate about what towns constitute Rochester's west side. It's generally agreed that Greece, Gates, and Chili are in. Parts of Irondequoit, Ogden (including Spencerport), and Sweden (including Brockport) are also usually included in the designation.

It's possible that these population demographics spread farther east and west, respectively, resulting in distinct cuisines. After all, the restaurants flourishing on the west side seem to place a premium on homespun values, like family and heritage, rather than the caprices of culinary trends. Staples like Agatina's, Red Fedele's Brookhouse, and Rohrbach Buffalo Road Brewpub started decades ago and still hold true to the ideals of family, tradition, and consistency — not necessarily fancy, but consistently good. Those ideals breed a loyal local following of regulars.

"It's people knowing people," said John Urlaub, founder and owner of Rohrbach Brewing Company. "I look at our customers that come in on a Friday night and well over half come in every Friday night ... their shoulders just drop, like, 'I'm home.' Our staff brings them their favorite beer before they even sit down."

Urlaub said he knew Red Fedele since he was a kid. Today, the Brookhouse proprietor still personally greets everyone walking into his restaurant, shaking hands, doling out hugs, and even sitting down at friends' tables. It's that kind of place.

Then again, there are those that say an emphasis on good food and drink at fair prices is what drives traffic — not which side of the river you're on. Stoneyard Brewing owner and founder Jay Nichols said in the 10 years since Stoneyard opened in Brockport, he's not really thought about fitting into the west side.

"We appeal to all demographics — it could be an electrical contractor or a computer engineer — you kind of have something for everybody," he said. That includes those with a taste for culinary adventure, apparently, as Stoneyard's menu includes a rotating game burger, a menagerie of unusual ground meats like elk, yak, and camel.

Stoneyard's business philosophy seems to be working, as the brewery moved to a new, larger location in Brockport last year. And other places have opened on the west side in the last year as well — notably, Taste of Soul (also in Brockport), Casa Merlita Philippine Cuisine in Gates, and #Snap Burger & Fries in Gates.

Still, as universal as the appeal of good food and beer may be, some concrete data can apparently block new places from opening up.

Restaurants' "method of picking a site becomes a little problematic," said David Dunning, Supervisor for the Town of Chili. "Basically they put a pushpin in the map and draw circles in a 1-, 2-, and 3-mile radius and count rooftops, and if the rooftops aren't there, they aren't coming."

For a town full of farmland like Chili, with a population density of 729 people per square mile (compared to the city's 5,885 people per square mile), that can indeed be problematic. Dunning said that method also ignores the fact that Chili gets significant through-traffic to the University of Rochester, Strong Memorial Hospital, and other west side towns.

Whether the relative dearth of coverage is due to new restaurants opting out of the west side, the fact that existing restaurants are happy with their books of loyal regulars — and can afford to wait for new ones — or a historical divide as deep as the Genesee River itself, what is known is that the west side has some places worth visiting. Not only will you get a plate of great food, but you'll be welcomed to the table like they've been expecting you.

And so, let's gather around those tables as unified Rochesterians, thankful for culinary diversity in our city. And also thankful that we're better off than those clods in Buffalo and Syracuse.