For the uninitiated, spiedies are to New York's Southern Tier what chicken wings are to Buffalo, what cheesesteaks are to Philadelphia, and what the Rochester plate is to, well, Rochester. Those familiar with spiedies likely know about the dish-specific bottled marinades from Lupo's Char-pit in Endicott or Salamida State Fair sauce from Johnson City. There's even an annual Spiedie Fest and Balloon Rally every August in Binghamton's Otsiningo Park.

In simplest terms, spiedies are sandwiches; traditionally cubes of long-marinated meat -- originally lamb, but now more commonly chicken or pork is used -- skewered, char-grilled, and served on a hoagie roll or a slice of Italian bread. Zesty and bold, the marinade is a cousin to Italian dressing, but more copiously seasoned, and they differ from business to business. The spiedie sandwich is much greater than the sum of its parts.

The specific origin of the spiedie is historically hazy, but most agree that Italian immigrants brought the spiedie to Broome County in the 1920s. They also likely gave this savory skewered meat its name (spiedino means "skewer").

SPIEDIElicious owners Chelsea and Paul Lee -- high-school sweethearts who grew up eating spiedies in the Southern Tier, often at backyard barbecues -- didn't want to open a barbecue joint, but rather a restaurant emphasizing the Italian roots of spiedies, while adding their own flair with fresh ideas, flavors, and combinations.

"My personality is anything but traditional," Chelsea says. "I like bold flavors. I like to experiment. I like bending the rules. We want this to feel like our kitchen, to offer really good food made from scratch that's affordable and accessible in a quick, casual environment."

SPIEDIElicious makes traditional spiedies; for now only chicken is on the menu, but the Lees say they are perfecting a process for pork to meet their high standards. They marinate the chicken for three days in homemade sauce. Then it's grilled and overstuffed into homemade bread, which was baked in a wood-fired brick oven that was imported from Italy. The bread, made with a 100-year-old Neapolitan recipe, is similar to pita but hardier, made with a high-gluten flour and brick-oven baked to make it poof out, Chelsea says.

"The Classic" (a steal at $8; I've yet to finish one in a single sitting) is the Lees' take on the original spiedie sandwich. I opted to finish it with a drizzle of the house-made hot sauce, and it was a flavor bomb of epic proportions.

Beyond the original, one of their most popular sandwich creations is "That Dude" ($10), which consists of grilled spiedies, apple butter, cheddar, and house-made berry balsamic vinegar. I tried a "Tom Boy" sandwich ($13), which includes grilled spiedies, homemade tomato jam, fried jalapeños, and Gouda. Savory, sweet, spicy, chewy, and gooey; there was lots going on inside that pillow-y bread.

As with all the dishes, the Lees incorporate intriguing ingredients that pair well and accentuate the vinegar, parsley, garlic, and oregano flavors in the marinade. SPIEDIElicious also sells its marinade (32 oz. container/$10) and uncooked marinated spiedies (32 oz. container/$15) to use at home.

The Lees' goal of combining old-school Italian fare with innovative combinations is further evidenced in the menu of wood-fired, 12-inch pizzas, most of which include spiedies as toppings, though anything on the menu is available in a vegetarian version. Chelsea emphasized that they are very accommodating in terms of interchanging ingredients among menu items, and they encourage experimentation. What you won't get on your pizza, however, is pepperoni. As part of the effort to use the best quality, least-processed ingredients, SPIEDIElicious instead offers piquant sliced andouille sausage as a pizza topping.

My girlfriend Molly's daughters, Norah and Jocelyn, feasted on a traditional "Cheesy Guy" pizza ($8) made with the slightly sweet house red sauce -- developed in a collaborative cook-off between Chelsea and Paul -- and abundant mozzarella. I tried a "Quiet One" pizza ($12), topped with the house red sauce, sliced mushrooms, prosciutto, onions, grilled spiedies, and mozzarella. After the first slice, I warmed to the idea of spiedies on pizza and appreciated the ways all the disparate flavors magnificently melded. Typical of good wood-fired pizzas, the crusts were thin, pleasantly chewy, and appropriately charred.

They shake things up with intriguing side dishes, such as the roasted, buttered fingerling potatoes ($4) with garlic, Parmesan, and chopped chives. The fire-roasted broccoli florets with Parmesan ($4) are tender, yet firm. And the passion fruit coleslaw ($4) includes passion fruit purée with sundry shredded cabbages, kale, and carrots. It was crunchy and fresh, tangy and sweet, and the passion fruit flavor elevated this slaw above most.

SPIEDIElicious does not sell soda, but instead offers eight house-made juice drinks ($2/unlimited refills) in peach, watermelon, wild berry, raspberry, blood orange, strawberry, black cherry, and passion fruit. They're made using only fruit purées, water, and simple syrup. These drinks, along with ice water, are dispensed into real glassware. 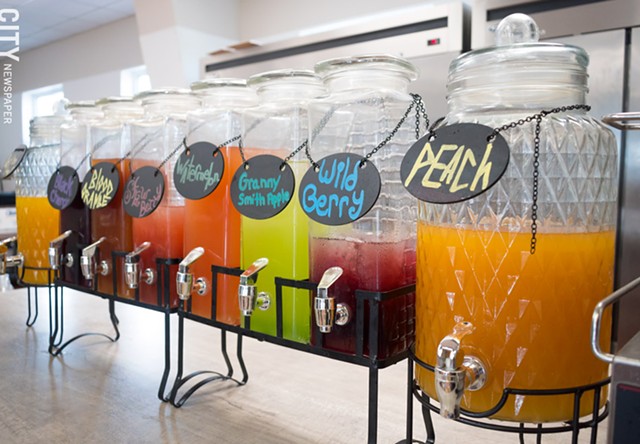 Similarly sustainably, SPIEDIElicious uses only real flatware. And the pizza box tops easily separate into four plates, after which the bottoms of the biodegradable boxes (all food containers are either biodegradable and/or recyclable) then break down even smaller to take home any leftover pizza. SPIEDIElicious has a video on its Facebook page demonstrating this clever procedure. And, sparing no detail, the trash receptacles are made from recycled milk jugs.