January 13, 2020
It appears a special election to fill out the term of former Republican Congress member Chris Collins will be held April 28, the same day as the presidential primary. 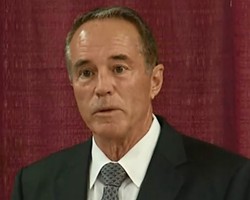 Governor Andrew Cuomo has not yet formally announced an election for the 27th Congressional District seat, but an official with the New York Attorney General’s Office said in court Monday that Cuomo will set the special election to coincide with the presidential primary.

The date was revealed during a hearing in state Supreme Court in litigation brought by state Republican officials to force an election sooner. The party feared that the results of a special election could be skewed by the presidential primary, which is expected to draw a disproportionate number of Democrats to the polls.

Collins announced his resignation in September after pleading guilty to charges of insider trading. He is scheduled to be sentenced on Friday.

Monroe County Republican Elections Commissioner Doug French in an interview sided with his party colleagues, saying linking the special election to the presidential primary will give an unfair advantage to Democrats.

“You’ve got 6 or 8 (Democratic) candidates for president, all out campaigning for the April 28th election here in New York state and there’s going to be a big percentage of those voters who come out to the polling site,” French said.

The Democratic county elections commissioner, Colleen Anderson, said a special election that coincides with the presidential primary would save money.

“Anytime you combine elections, it’s good for taxpayers because elections cost a lot of money these days, especially when you bring in early voting and having to do 9 days of early voting; so you’re going to have that on top of election day,” Anderson said.

Nate McMurray, the former Democratic supervisor of Grand Island, Erie County, has announced his candidacy for the post, which he narrowly lost to Collins in 2018. Several Republicans have expressed interest in running, including state Sens. Rob Ortt, of North Tonawanda, and Chris Jacobs, of Buffalo.

State Supreme Court Justice John Ark, who presided over the hearing, reserved decision in the case. He add, though, that if Cuomo calls for the special election to be held April 28, then that is when it will be held.

New York state GOP Chairman Nick Langworthy issued a statement criticizing what he calls Cuomo’s “partisan manipulation” of the special election. He called the move "a slap in the face to Western New Yorkers who won’t forget he put his own interests above their right to representation in Congress.”

Whoever wins the special election would serve through 2020, and would have to run again in November to keep the seat for a full, two-year term.

The 27th Congressional District includes all or part of eight counties, including a portion of Monroe county.

Randy Gorbman is the news director at WXXI, a media partner of CITY. He can be reached at rgorbman@wxxi.org.