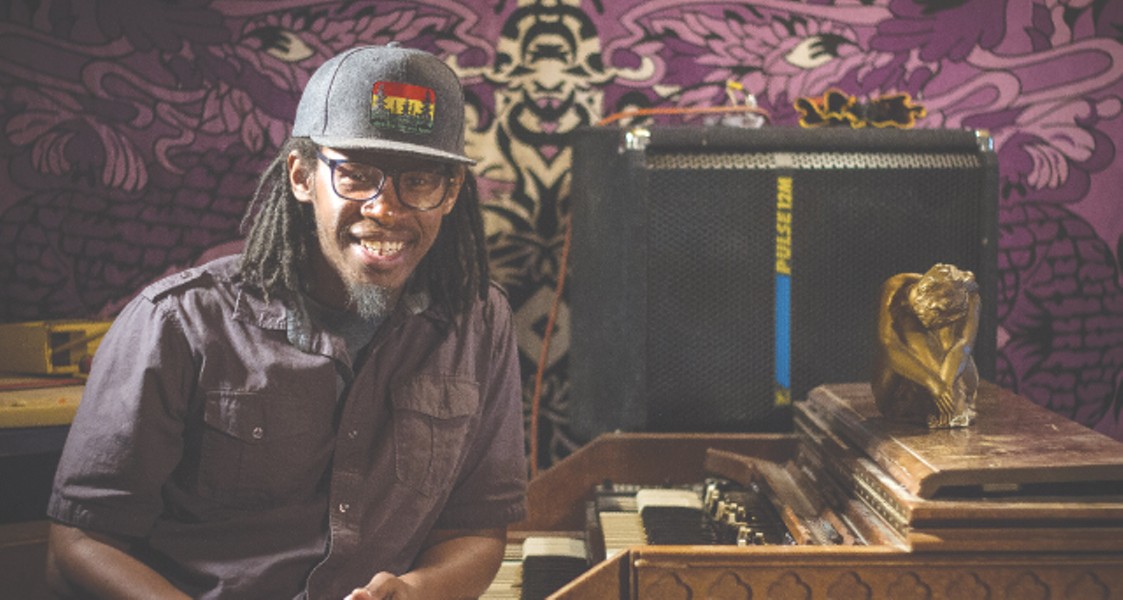 To find the music, go to facebook.com/TheEnglishProjectFunk

If you've been around this music scene to any degree, you've no doubt seen Chris "Hollywood" English and the smile on his dial. Not just a grin, a grimace, a glower; it's more of a contagious laugh. It's an invitation to join in the party and dance to the music. English is a constant around the Rochester scene, both as a fan and as a player with local and regional bands like AudioInFlux, Funknut, The Buddhahood, Subsoil, and The Tim Herron Corporation, and national acts like guitarist Buddy Guy and Asheville's Yo Mama's Big Fat Booty Band.

From behind the drums and beneath the cool shade of assorted hats, English currently fronts The English Project, a powerful band of heavy hitters. The band jams with soul and R&B undertones, a la Marvin Gaye and Donny Hathaway, with a slight trace of hippie derivative and swirl. But before you call The English Project — with bassist Andres Rivera; guitarist Paul McArdle, keyboardist Dave Solazzo, percussionist Michael Van Munster, and organist Ivan Thompson — a jam band, check it out first.

Jam bands are known for their extrapolation and delving into every aspect of a groove. It's all about the middle. This often leads to a safe, comfortable, mid-tempo hover with no end in sight.

Not to be confused with the complacency of comfortable tempos and the temptation to get lazy, English takes The English Project up to a cruising altitude and cuts the engine. And we all get to dance in the freefall and jet wash as evidenced on the band's excellent debut record, "The English Project Volume 1."

"Volume 1" opens up with "4 Finger Discount," a jumpy little jazz ditty that doesn't let the funk get in its way. The whole record sounds like a progressive jazz affair. There are no sharp turns or stops and starts to lose listeners. And English's deep soul vocal treatment on "Chance to See" will definitely make The Reverend Al green with envy.

It's with its diverse musical talent and love that The English Project plays. This goes double for English himself. It's how he communicates with the world around him.

"It's the only way I can express myself to people," he says. "I try to give them a good message: to love yourself, to reach out. The music I play is very uplifting. When people come to a show and when they leave feeling uplifted, loved, appreciated — that's what I feel."

English got the good message and taught himself to play drums when he was just 5 years old.

"I started out in church with my parents — who were ministers in the Pentecostal church — and my uncles," English says. "I watched and learned from my uncles. My mom was a drummer, too. Just watching them play different kinds of music turned me into a singer and a drummer."

Any of the projects English has his mitts on has a direct line back to the church. To him, there's little difference between church and secular music; it just depends on which one you choose: "I love you, baby" or "I love you, Jesus."

"It's not a choice," English says. "It's how you word it. It's pretty much the same thing, just worded differently. In the Pentecostal church there are all varieties of music that you learn from it. And when you go and play the blues or jam band music or rock, it kind of fits in with the gospel. It's hard to explain to those who haven't played in the gospel world, but it's all in one."

English left home at 17 and spent the next few years touring around the US playing gospel and secular music. He landed in North Carolina when he was 20 and stayed a spell. While playing with a wedding band on Hilton Head Island, South Carolina, opportunity knocked: blues guitar legend Buddy Guy was in attendance. English knew it and pulled off one of Guy's songs. It was a smart move.

"A few days later, I was on the road with Buddy," English says. "I did that for a year and a half. He was a humble guy, a father figure. Yes, he was strict, but I needed that at that age. I was 22 and a wild dude."

Wild dude or not, English can sing, baby. And since he's doing it from a drum throne, he's got ample control on The English Project's dynamics. But it's not just his band. In some cases, it's nobody's band as it lays back into a groove as if it's about to levitate.

"It's kinda weird," English says. "Because we all write. But because it's my name, everyone thinks it's my band. We all have a say in The English Project." Yet besides that big smile, on the other end are English's itchy feet; the cat moves from band to band.

"I try not to stay in one place because you can get bored," English says. "I don't just bail: I find another thing that interests me while I try to keep the other thing happening."

Well, it's The English Project that's happening now with the new album ready to drop and with another one on deck. English talks excitedly about a music festival he wants to create here in Rochester. And judging from his smile and gregarious nature, English has got to be one of the happiest guys on earth.

"I try to be," he says. "Especially when it comes to music. Every time I'm behind my instrument I just let go and try not to think on the negative and what's going on in the world today."

The English Project To find the music, go to facebook.com/TheEnglishProjectFunk