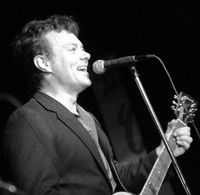 "It's sold out," my friend hollered into my cell phone. "They won't let me in."

I had told her, and countless others, "Nah, don't get tickets. It's gonna be a great show but it won't sell out. Rochesterians are too hung up on cover bands, chain restaurants, and bad TV to venture downtown to dig a relative unknown." But surprise, surprise; English soul singer James Hunter's Thursday show at Montage was sold the hell out. It was fantastic. It was a sensation. It was souled out. So Rochester's got some soul after all. I couldn't be happier. My town didn't let me down.

The crowd shoehorned itself into the joint greeting Hunter and his band with cheers as they made for the bandstand. With an ear to ear grin, he seemed thrilled with the response, quickly introduced himself and the band --- "me mates" --- and launched into "Talkin' 'Bout My Love" before rolling out my fav "You Can't Win." The sound was spectacular. The horns in particular sent me. When that baritone player dove for the deep notes they resonated in my bones.

Hunter pushed the new album, for the most part keeping true to most of its arrangements. His guitar playing was terse and twangy and deserves almost as much praise as his golden pipes. Homeboy can sing and sling. Hunter paused to dedicate a hip version of "Riot" to The Five Royales singer John Tanner, who passed away in November.

The band didn't vary tempos a whole helluva lot and kept to a nonchalant, medium tempo shuffle that skirted ska. This had a tremendous effect on people who could only dance from the waist up 'cause they were sitting down or wedged in too tight with the other soul-lovin' sardines. Well, my bottom half couldn't take it. C'mon, I'm supposed to just sit here? I made my own dance floor in the 4'x4' area by my table and cut me some rug with my baby, apologizing here and there for a coupla spilt drinks and stepped-on toes.