Soul-warming soups for the dead of winter

January 01, 2021
Depending on your age, soup conjures up different images. Tomato soup with grilled cheese resonates with baby boomers, while Pho or Ramen tops the trendy charts of Gen Z. For Gen Xers, none forget Yev Kassem, the "Soup Nazi” of “Seinfeld,” and his to-die-for Mulligatawny, Crab Bisque, Split Pea, French Onion, and Mushroom Barley selections.

I vividly recall reading as a kid Martha Brown’s “Stone Soup,” the European folk tale (told many times over) about hungry soldiers and travelers who convince the townspeople to donate ingredients for their mysterious cauldron of soup. In the end, what started as merely water and stones, was cunningly transformed into a delicious meal and a lesson in sharing and friend-making over food.

January happens to be National Soup Month and the stone soup story really reflects its origin. Not surprisingly, many food historians date soup making back 20,000 years ago or more. Steeping meats and ingredients in water for long periods of time naturally retained and enhanced flavor while also tenderizing the proteins, resulting in a one-pot, nutritious meal. The word soup is derived from the French term soupe (broth) and the Latin word suppa — meaning bread soaked in broth. To this day, soups across the world are still served with bread, be it a silver dollar roll thrown into a to-go bag, oyster crackers with chowder, or a toasted baguette slice floating atop a bowl of onion soup.

If there is one local name synonymous with soup, it would be Rose Reynolds, co-owner of the American Hotel in Lima, Livingston County. She also holds the titles and responsibilities of chief soup maker, storyteller, and, in my book, one of the friendliest people one could ever have the pleasure to meet.

The restaurant has been in her family for 100 years, but Rose and her brother Pat have been at the helm since the late 1970s. For decades, so the story goes, their mother, Aretha, offered four staple soups — chicken noodle, split pea, vegetable beef, and navy bean. But when tougher drunken driving laws in the 1980s cut into liquor sales, the brother and sister turned their focus to the menu to shore up their revenue stream.

Bowl by bowl, Rose expanded the repertoire of soups over the decades to what is now a rotation of an astonishing 400 soups. The restaurant offers between six and 10 fresh options daily. Rose has invented concoctions from leftovers and whatever happens to be in the fridge, and poached a few recipes from her travels along the way.

Her bestsellers are split pea and cheeseburger chowder, but you can’t go wrong taking a chance on whatever is on the day’s menu. There are variations on the favorites, too, like the Aruba Pea, which Rose brought back from a trip to, well, Aruba. She simply adds sweet Italian sausage, and probably a few other items she purposely didn’t mention.

A seasonal delight is the Drunken Pumpkin, which combines pureed pumpkin, maple syrup, apples, celery, onion, sour cream, and Jack Daniels. That recipe, too, was inspired by a dish that Rose sampled at the InterContinental hotel in Chicago. It has such a following that when canned pumpkin was hard to come by last fall, a loyal customer so eager for bowl brought her own stash of the stuff for Rose to use.

Regulars rave about the creamy smashed potato soup (sour cream, bacon, scallions, onions, and chicken stock) as well as the salty clam and sausage soup (clam juice, sausage, diced tomato, thyme, garlic, and mirepoix). The samples I enjoyed over a drink at the American Hotel’s beautifully patinated and homey bar justified the raving. 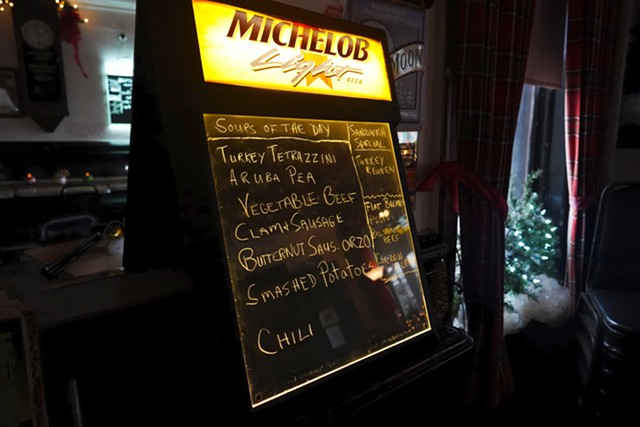 Many of Rose’s recipes can be found in her three spiral-bound cookbooks on sale at the restaurant for $24 apiece. The books, whose colorful titles like “Never Enough Thyme” and “Hold the Chicken, and Make It Pea!” reveal the author’s sense humor, weave history and vivid narratives to complement the recipes.

We are in prime soup season, when dethawing and eating foods with therapeutic properties are high priorities. So, here are a few more stellar soups, with global flare, from restaurants in and around Rochester to warm your soul and carry you though the winter. All are available for takeout. Even Yev would approve. Yes, soup for you!


Baked Onion Jack Gratinee at Bernard’s Grove — Tons of sautéed Spanish onions and shallots swim in a complex broth made from homemade beef and lamb stock covered by a blanket of Monterey Jack cheese. You’ll taste the sweet sherry immediately. This is a must for any French Onion soup fan. 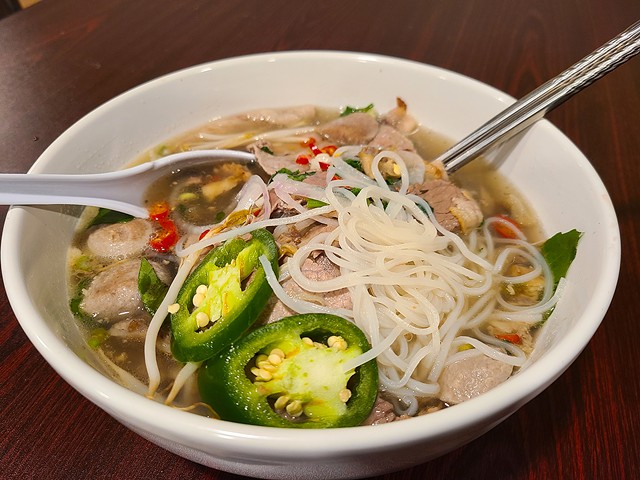 Mish Mosh Bowl at Fox’s Deli — Everyone knows about their Matzo Ball soup, but the Mish Mosh doubles down to include kreplach (beef filled Jewish wonton), noodles, and rice. The restaurant describes it as Rosh Hashanah and Passover in one bowl! The Matzo dumplings are light and airy soaked in chicken broth goodness. 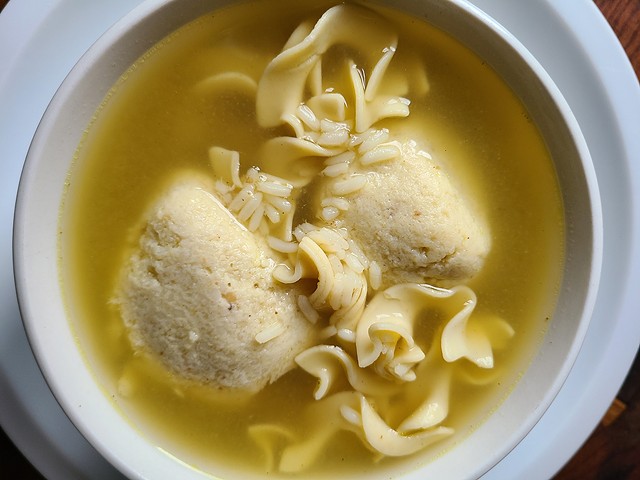 Mulligatawny Soup at Amaya Indian Cuisine — This classic Indian soup marries slightly sweet and savory flavors with a thicker profile. Amaya’s version is vegan and made with a yellow lentil base along with other spices like salt, pepper, and turmeric. Make sure to try the outstanding thin, crispy papadum flatbread too.

Soup Du Jour at BODEGA — You can bank on anything Mark Cupolo (of Rocco and Rella fame) does being high level and done right. His new gourmet micro-market on Park Avenue carries everything from intriguing snacks, to IPAs, breakfast sammies and soup. Drop by to see what it might be that day, but know it will always be crazy good.

Vince Press is a seasoned freelance writer, wannabe photographer, PR guy, and food + beverage enthusiast who will do just about anything for good bourbon or Asian noodles. He is a native Rochesterian and has also lived in Florida, Arizona, and Virginia before venturing back to his hometown. Instagram: Vince_Press or Twitter: @VLPress