Sonja Livingston on discovery through memoir

March 16, 2016
Sonja Livingston's "Queen of the Fall: A Memoir of Girls and Goddesses," is this year's selection for Writers & Books "If All of Rochester Reads the Same Book" city-wide reading challenge. City talked with the author mid-way through her reading tour, which continues through March 19.

City: The essays in "Queen of the Fall" blend your personal history with the accounts of many women whose lives have become a sort of personal pantheon. What other iconic women have you connected to since writing this book, and how did these associations form?

Sonja Livingston: A personal pantheon is a good way to describe it. I'll bet we all have our own collections of icons that we look to for various types of inspiration. Since writing "Queen of the Fall," I've finished another book which had me researching lives from the near and distant past, such as Valaida Snow (a trumpeter during the Harlem Renaissance), The-Other-Magpie (a Crow woman who fought at the Battle of the Rosebud in 1876), and Audrey Munson, the artists' model whose face and figure inspired thousands of pieces of public art and who starred in several silent films, but spent the last 65 years of her life (1931-1996) living in obscurity and confined to the State Hospital in Ogdensburg.

These stories aren't always pleasant or traditionally inspiring, but I have found in researching their lives that each offers some quality (courage, ferocity, persistence) that's meaningful to me as a human being. Whenever I start thinking about plastic water bottles and landfills or racism and sexism, I get all gloomy and overwhelmed, but paying attention to the individual stories that come my way has always been a source of reassurance. My writing has taught me to look a little more closely at people's lives, and the truth is that I don't think we have to look very far for inspiration and hope. 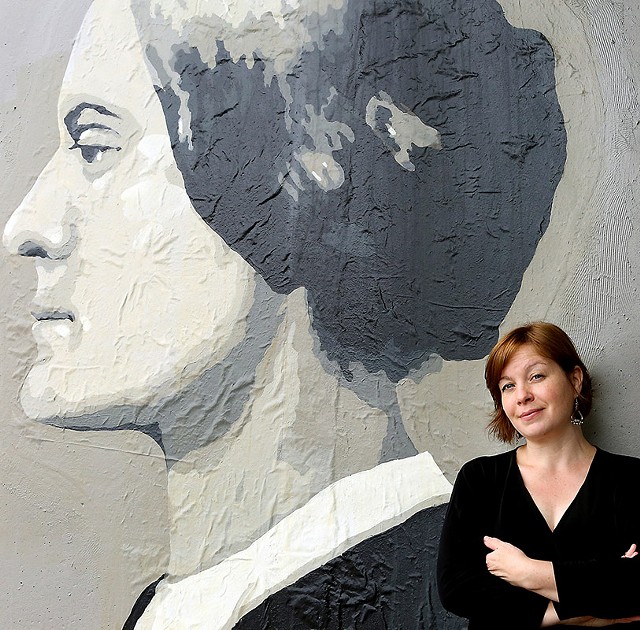 What are the benefits and challenges of exploring experience through memoir essays or creative nonfiction, instead of autobiography and biography?

Creative nonfiction tends to produce writing that's more intimate and visceral than a compilation of facts and figures, which can be informative, but often abstract or overwhelming. Both types of writing are important, but creative nonfiction is increasingly popular because people are hungry to connect with human stories and there's a certain power in writing our actual life experiences and claiming them as such.

The challenge is that it can be tough to strike a balance between the personal and the cultural. Writing about child poverty from a personal perspective, for instance, can connect readers with the subject in ways that expands their awareness, but only if the writer somehow crafts the subject in ways that allows it to speak for and also go beyond their own experiences.

Did you consider yourself a writer before attending Judith Kitchen's essay classes? What was your experience of shifting toward a career in writing like?

I was so enamored of writing and writers back then that I wouldn't have dared to call myself a writer. In fact, it seemed like I wasn't a writer until I'd published my first poem or essay. But once I did that, I told myself that I'd be the real deal after getting an MFA or winning an award or publishing a book. But even after I managed those things, there was something about calling myself a writer that felt pretentious and uncomfortable.

At some point -- probably after being invited to read my work regularly or becoming a professor -- I began to feel more comfortable saying that I was a writer. It's a strange thing. It seems like a small point on the surface, but I see the way my students and friends struggle with this. We get so skittish about claiming the word writer as if we have to wait for others to bestow the title upon us. Maybe it's getting older, but it seems so clear to me now that we have to decide for ourselves who we want to be in the world and own it. Whether it's a writer, vegan, scholar, peacenik, singer, preacher, and so on.

The genre of memoir lends itself to exposure, not only of yourself, but of others who are part of your story. Do you wrestle with this? How do you navigate the issue of revelation respectfully?

Wrestling is the perfect word. All writers struggle with this, I think. Czeslaw Milosz said: When a writer is born into a family, the family is finished. It's a funny quote, in part because it's at least a little true. The friends and families of writers have complained about finding versions of themselves in novels or poems since novels and poetry have been around.

In memoir, though, our relationships are laid bare. When I write about my mother -- even if I change her name -- there's no guesswork about who she is. No matter how respectful or fair I think I'm being, the fact is that my family or friends or 6th grade teacher didn't ask to be written about and may not welcome it. That said, we don't live our lives in a vacuum and a memoir that doesn't go beyond the writer will probably not be very textured or vibrant.

Anne Lamott said: You own everything that happened to you. Tell your stories. If people wanted you to write warmly about them, they should have behaved better. Again, I find truth in her quote, though it's a little extreme. The truth is somewhere in the middle, I suppose, and the way I've handled this is to try to be as generous in my depictions of others as possible. If a scene or characterization is potentially problematic, I ask myself if it's truly needed and whether it's relevant to some larger point. Some stories are tempting to tell for their own sake, but in memoir especially, writers have to ask themselves whether what they've written expands the understanding they're attempting to forge in their work.

Your Rochester reading tour so far has included a bus tour of sites discussed in "Queen of the Fall" as well as in your first book, "Ghostbread." The tour stops included the Susan B. Anthony House and the Barrel of Dolls strip club. What other sites were featured, and how was the tour received?

I was afraid that going back to my old neighborhood on a tour bus would be strange. And it was strange. How could it not be? But it was also powerful. We stopped at School No. 33, East High, Savoia's Bakery, the old Corpus Christi Church (now Our Lady of the Americas) and the little dead-end (Lamont Place, near Goodman Plaza) where my family lived. I read excerpts from the books and talked about pervasive childhood poverty in the northeast section of the city -- not only from my own experience, but as it relates to kids and families today.

I was worried about people gawking at rundown houses or that I'd be standing in the aisle pointing out corner stores and check-cashing places with a microphone. But none of that happened, and the truth is that people weren't on the bus to simply "tour" the areas. They were men and women from the community who wanted to better understand what so many residents of their region still face in their daily lives. The tour sold out and Writers & Books is organizing another for some time in May.

Just this week you published your third book, "Ladies Night at the Dreamland," which explores the extraordinary lives of some lesser-known historic women. Other than the relative brevity of their time in the spotlight, was there a unifying factor about each of these women that caught your notice?

Each of them, by choice or circumstances beyond their control, were thrust into the limelight. Most were wild or audacious in some way, such as Maria Spelterini, who crossed Niagara Falls on a tightrope in 1876; or Big Maybelle, a soul singer from Jackson, Tennessee; or Alice Mitchell who murdered her female lover after their attempt to marry was thwarted in 1892 Memphis. Others were victims, such as the three girls killed in the 1970's in Rochester by the Alphabet Killer; Krao Farini, a child exhibited as Darwin's missing link during the Victorian era; and May Fielding, the "white slave girl" who died in 1857 at 15 years old and is buried at Mt. Hope.

Beyond the mystery of their lives, what the subjects have in common is that each of their stories is connected to visibility, fear, or daring -- especially as it relates to the lives of girls and women. Many of them lived outside the normal expectations for their time periods and have fascinating backstories, but mainly, I was interested in their forays into the limelight and what that meant in their lives as women.

I'm trying my hand at fiction. Little by little, I've been producing work that relies more on imagination than memory or research, so writing a novel seems like a natural extension. Memphis is an amazing place and has greatly fueled my work, but I remain inspired by the landscape and people of western New York. It's a region rich with history and tradition and I continue to return to it in my writing. I have a year's sabbatical starting this fall, during which time I hope to travel back up to Rochester and Buffalo and get lots of writing done.