Something old, something new: old-house fix-ups 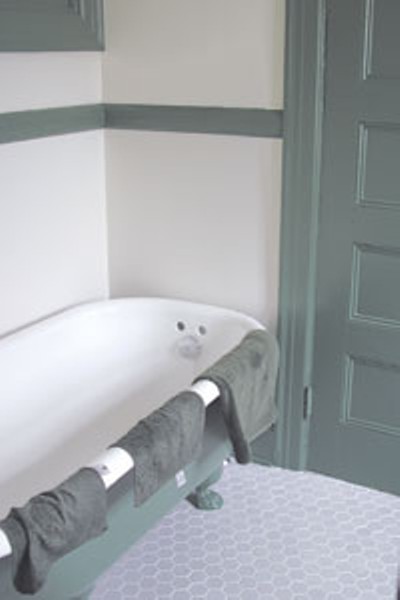 In a small bathroom, the clawfoot tub and 100-year-old molding were saved and reinstalled; the walls and floor are new.

One of the Rochester area's biggest treasures is often overlooked, and, worse, underappreciated: its extraordinary number of old, ordinary, early 20th-centuryhouses. When we think of "preservation," we think of the mansions on East Avenue, the Victorian groupings in villages like Pittsford and Spencerport, the Frank Lloyd Wright house on East Boulevard. These are important.

But the less showy houses of the early 1900s are important, too, and the region has a wealth of them. Factory workers' cottages, American Four Squares, bungalows, 90-year-old frame houses bearing no particular architectural designation: These are more humble structures, built for middle-class folks, and their preservation gives the older neighborhoods of the region enormous character.

And for their owners, they provide much more than shelter. They were built by craftsmen who took pride in their work, and unless the house has been severely damaged by uncaring occupants, that pride is still visible in every room. These are the houses with hardwood floors and front porches. They frequently have fireplaces and pantries.

Our family is lucky enough to live in one of them, a plain old Arts and Crafts house that celebrates its 100th birthday this year. And like many non-landmark old-house owners, we've tackled most of the preservation ourselves... until this year.

We moved in 37 years ago, and set about The Project. We ripped out drywall that had cordoned off a second-floor bedroom to create a one-room apartment for the previous owner's housekeeper. We took the main staircase back to its original configuration. We cleaned. We painted.

This was during Rochester's Urban Renewal period, when the city was knocking down everything in sight downtown. We found a spectacular mahogany banister in a Victorian house scheduled for demolition and got permission to take it, free. One trip to the library, and Bill and a friend figured out how to disassemble the banister. We had a woodworker do the installation.

We hired an electrician to upgrade the wiring in the house.

And then we ran out of steam. And money.

Over the years, juggling a growing family and a growing business, we went back to The Project off and on, painting here, patching there, seldom finishing anything.

The walls in the stairwell existed for years in two incompatible hues, the old color near the ceiling, the new color (one we never should have picked in the first place) reaching from the baseboard to as high as I could push the roller.

That was by far not the only uncompleted project. Inspired by a photograph in an old-house magazine, I began stripping paint off of the woodwork in our bathroom. Got it stripped. Never got beyond that. The result: Years of moisture turned the unprotected wood into an unsightly mess.

When the third-floor bathroom developed problems, plumbers had to rip a hole in the ceiling of the bathroom below it. It stayed there until we had a large Christmas party scheduled and we couldn't face the humiliation of guests using that room. Bill nailed up drywall to cover the hole. And there it has remained, for years.

This winter, we accepted the inevitable: If we were ever going to get the house finished, somebody else would have to do it. And so we hired a contractor, whose talented, eminently patient craftsmen are finishing our projects and fixing the damage we've done.

Watching experts at work has taught us some new things, and reinforced things that we knew but pretended weren't important. Here, then, are a few tips on preserving ordinary but important old houses.

Live in your old house before you leap. Get a feel for how you'll use it. And learn about its history. When we bought our 1905 house, we had never heard of the Arts and Crafts movement. As a result, we did a lot of things we've since paid to have undone. Education is important, and for owners of Arts and Crafts houses, it's also a money-saver. The simplicity of Arts and Crafts houses is part of their significance. We put up non-period wallpaper when a simple coat of paint would have been cheaper and more appropriate. We paid to have the golden-oak floors stained an inappropriate dark, dark brown --- a fad at the time --- when a good cleaning and polishing would have been better.

Some good things won't last forever. I've driven the contractor and his crew to distraction insisting that everything "original" has to be saved. Both of our bathrooms had serious plaster and peeling paint problems, but I wanted to save the plaster on the walls, which had been scored to look like tile. One hundred years had simply been too much, though. Our contractor --- who knows and respects old houses --- argued for gutting the worst bathroom, putting in new walls and reinstalling the old woodwork. Subway tile --- real tile --- on the shower wall gives us a little historical reference.

Not everything old is architecturally and historically significant. Our house is not a fancy house. Neither is much of its woodwork. My long hours of stripping the woodwork in the bathroom uncovered wood with a good many blemishes. Often in houses like ours, an architectural-historian friend has told us, the wood was intended to be painted. Earlier this month, the woodwork in our bathroom got the paint --- and the protection --- it needed.

On the other hand, you want to save what you can. Years ago, several boards in our hardwood kitchen floor had been replaced --- and replaced poorly --- with inappropriate wood. Other areas had been damaged by our dog. The contractor refinishing the floor won our hearts by insisting on using old wood, rather than new, for replacement strips. He found what he needed under the linoleum on the basement-stairs landing.

Preparation and patience are important. We knew this, of course, but we're busy. And we're congenitally impatient. Years ago, I was tempted to take up weaving, attracted by the beauty of looms and all of those nice colors and wools. One of my grandmothers had woven coverlets; why couldn't I? I watched one demonstration and realized weaving wasn't for me. Too much prep time.

Same thing's true of painting walls. Looking around the house as our painter neared the end of his job, we've been struck by the difference between his work and ours. Our painter kept scraping and pushing and sanding until he got the surface he wanted before he opened a paint can. We always just washed and grabbed the brushes and rollers.

Research is important. Old-house owners in general are fortunate, because there are numerous publications and on-line resources. Our family subscribes to Style 1900, American Bungalow, and Old House Journal, and watching public television's "Ask This Old House" is a Thursday night ritual.

Old-house owners in the Rochester area are particularly fortunate, because preservation is taken very, very seriously. A crucial resource for any old-house owner, and anyone interested in preservation, is the Landmark Society of Western New York. While the organization has worked tirelessly to preserve the region's big-deal, landmark-quality structures, it's equally committed to helping owners --- and tenants, too --- of the humblest old houses. Its library and staff are available for research and questions.

We're also lucky to have numerous individual preservation experts living in the Rochester area. Jerry Ludwig's weekly column in the Saturday Democrat and Chronicle focuses frequently on old-house problems, and one of the things I like best about Jerry is his dedication to historic preservation. His advice frequently includes cautions about inappropriate restoration techniques. Other Rochester experts include Steve Jordan (whose knowledge about old-house windows includes where to find old glass panes to replace broken ones, so the windows can keep their rippled effect). Old-house magazines call on Steve frequently for how-to articles.

And our friend Jean France is a nationally known authority on the Arts and Crafts period. Her frequent lectures in the Rochester area offer mini-seminars on older buildings.

Finally, if you're going to hire out your work, do some research on area contractors. Ask friends and neighbors. Call the Landmark Society. Check out the usual sources for ads, but be clear about your needs. Interview prospects and ask for references. As you walk them through your house, ask them questions; listen to their comments about what they're seeing. What do they seem to know about old houses, old windows, old woodwork? How respectful are they of old materials and old craftsmanship?

There are plenty of skilled craftspeople --- painters, plumbers, carpenters, general contractors --- who respect and enjoy working on old houses. This is not easy work, though; you never know, as our contractor says, what you're going to find. You want people who know about old houses, what's appropriate and what isn't. You want people who won't cut corners.

You also want craftspeople who are patient, who understand what you're after --- and with whom you get along well. Our job hasn't been a huge one in terms of what's being done. But it's been time-consuming, as work on old houses often is. The craftsman who's done the biggest part of our job has maintained his good humor throughout our mind-changes and weird requests.

You also want people whose advice you can trust --- when to give up on saving old plaster, for instance. Once the old stuff is gone, it's gone.