Something more at Blackfriars

The air around Danny Hoskins crackles with the contagious energy of someone who spends entire days brainstorming. He's spent many of the summer days indoors. His "office" is a tiny, sunlit space that doubles as the Blackfriars Theatre box office, though he's just as likely to camp out at a wobbly card table near the stage so he can jump up to help his design crew with the set for "A Few Good Men," which opens the 2015-16 season on September 4. After a year working side-by-side with former Blackfriars artistic director John Haldoupis to ensure a smooth transition, Hoskins has been flying solo since July 1. 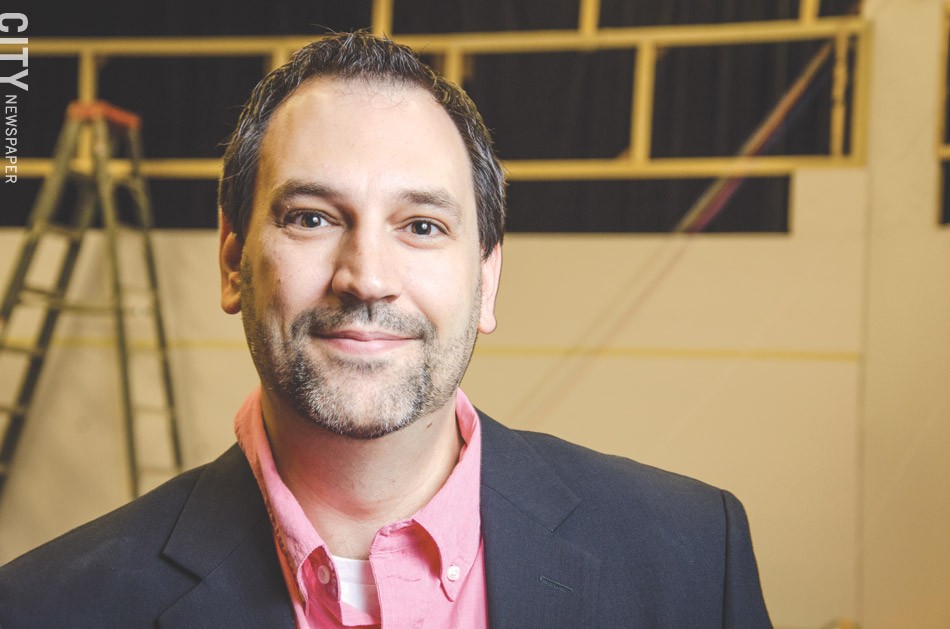 Hoskins is an East Rochester native who returned to the area in 2006. Before that, he was teaching at his undergraduate alma mater, Elmira College, and then — as so many homecoming stories go — there was a girl and a broken heart. When both his teaching contract and the relationship ended, he couch surfed and job-hunted in other cities for a while.

"But I was 32, and thought, 'I'm a little old to be sleeping on couches trying to figure this out,'" Hoskins says. "So coming back to Rochester wasn't a choice, but it was an option to restart." He had filled nearly 10 years before that by earning his master's in acting at the University of South Carolina, working at the Alliance Theatre in Atlanta, and touring regionally.

Hoskins met Haldoupis soon after he returned to town and began contracting with Blackfriars in hopes that a full-time position would open up. When the budget didn't permit that, he accepted an educational role with Rochester Children's Theatre, which was then located at Nazareth College.

For the last two years of his five-year tenure there, Hoskins was the artistic director of RCT. When RCT founder Deborah Haber made the decision to transition the company to D.E.E.P. Arts in 2014, Hoskins hit the job market. It was serendipitous timing: just one month later, Haldoupis announced he was retiring from Blackfriars after 35 years at the helm.

Locals and out-of-towners alike applied, but the Blackfriars search committee wanted to find someone who believes in Rochester. "It would've been easy to hire someone just out of theater school somewhere, but ultimately, BFT is a Rochester theater company — it's incredibly important to have someone who is inspired by the talent here," Haldoupis says. "We believe he is committed to stay with this for a long time."

Hoskins's first season is filled with new titles and talent. Several of the shows, such as "Heathers, the Musical" and "Annapurna," have never even been performed in the state, excluding the New York City area.

"Blackfriars has always had strong, diverse offerings in every season — classics and popular fare — that's one of the things I am hoping to maintain," Hoskins says. "I love every show in this season. They all ended up in my 'what I'd like to direct' pile, but I realized I can't do that."

Hoskins will direct the bookends of the season: "A Few Good Men" in September and "Heathers, the Musical" in May, as well as pen the script for "Jekyll and Hyde" in January. "A Few Good Men," in particular, is a bucket list show for him — it's a fairly large cast of 16 (15 men and one woman). More than 30 auditioned for the show, and Hoskins assembled a cast of new-to-Blackfriars actors and a number of "regulars."

The Blackfriars "regulars" are known throughout local theater circles. Over the last few years, Haldoupis tended to work with the same group of actors and crewmembers, and audiences grew to expect their favorites on stage (and in the wings) each season. While Hoskins sees the benefit to working with people you know and trust, he's also a firm believer in expanding the reach of the Blackfriars stage.

"It's not a focus to step away from those who have been with us through the years, but it is an intent of mine to be more open to new people getting in here," he says. "It is a fine line but I recognize that there has been a Blackfriars crew, so to speak."

When he directed "Beehive" in July, four out of the six Beehive ladies had never worked at Blackfriars before. He's also bringing in fresh, albeit local, faces to direct the other shows in the season. "You have patrons who have their favorites," he says, "but then you want new people so the patrons look at the folks and say, 'Oh wow, who's that?' You need that energy when you're changing your path."

"It was unusual because I did much of the design and costuming myself and it shut out a lot of people from working there," Haldoupis says. "I don't think the work suffered, but I think the connections and politics and relationships in the community suffered."

Previously, there was a single standing community partnership — the Hourglass Play Reading series, which will continue this season — but the upcoming season will include seven partnerships. One of the collaborations launched last spring when Nazareth College Professor Sherri Baker Hamilton assigned her graphic design students to treat Blackfriars as a client.

"They used to design for a fake coffee shop or a bank — we've replaced that," says Hoskins, who had the chance to visit the class, talk about the theater and give the students three show titles to design materials around. "They get really excited to do something artsy and then the teacher in me comes out." (Hoskins adjuncts in the SUNY Brockport theater department.) The 11 students received individual feedback from Hoskins, and then the designs of two students, Amanda Murray (chosen as the season designer) and Meagan Kelly (chosen as the summer and special events designer), were used this year.

Another partnership draws from a popular Rochester Fringe Festival event: alongside Writers & Books, Blackfriars will mount a 24-hour Musical Theatre Festival in spring 2016. "I'm terrified about this one," Hoskins says with a quick laugh. "I've been a part of the Fringe event and it's invigorating, but scary. Now we're adding music in that short timeframe."

There's also a partnership with Rochester Institute of Technology's theater program (a separate track from the well-known NTID theater program) where design and technical students will have the chance to work behind-the-scenes on actual productions at Blackfriars. Another two partnerships are with local comedy troupes — Canary in a Coal Mine and Unleashed! Improv — which will create the Blackfriars Comedy Series to present comedy weekend events and late night comedy sketches.

Perhaps the most ambitious partnership is an original show based on "Jekyll and Hyde" and performed by PUSH Physical Theatre. Hoskins previously worked with PUSH on "Dracula" at Geva Theatre Center in 2009 and "Arc of Ages" at JCC CenterStage in 2013. Darren Stevenson, PUSH co-founder and artistic director, said they wanted to work with Hoskins again and "Jekyll and Hyde" was in the back of his mind as a potential project. A partnership is ideal for PUSH, since the group spends much of its time touring and does not have a performance home of its own.

Blackfriars agreed to handle the business and marketing side of the partnership, freeing PUSH to build and present the show. "Now, we get to collaborate with Danny again and have his writing," Stevenson says. "We are not wordsmiths and he is, so having someone who can write, especially for physical theater where the movement is central and you need fewer words, is crucial."

Hoskins doesn't have an elevator pitch prepared for Blackfriars, but he does want people to know that it's a homegrown company. "Everything is built here, from the ground up, for every production and the actors and directors are all Rochester-based," he says. (And it's worth noting that Blackfriars pays its cast and crew for every show.)

"The artists who flock to Blackfriars are like myself: ones who have worked regionally and professionally, gone to school for the arts and decided to make Rochester home; to have a family and a job, but continue the pro-level quality work they've done in the past," Hoskins says. "I think that does put us in a certain class of theater in the Rochester community. We are here to serve at a high level of quality, integrity, and now, engagement — we're poised to take a large step forward and set ourselves in a new class of work."