Some deafblind residents lose services — and socialization — during COVID-19 pandemic

PHOTO CREDIT MAX SCHULTE Woody Livingston has very limited vision and uses a cochlear implant to help him hear. He says it's been challenging during the coronavirus pandemic to lose time with support service providers, or SSPs.
Woody Livingston says he's an outgoing guy.

"I like to go fishing. Go to the lake. You know, travel all around," the Henrietta man said.

Like a lot of people who've been sticking close to home during the coronavirus, Livingston hasn't been able to do fun things like that.

But for him, the restrictions have gone far beyond fishing.

For Livingston, who is deafblind, it meant almost entirely losing his connections to the outside world. 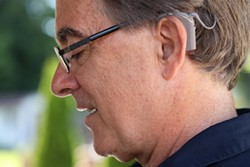 Livingston uses a cochlear implant to help him hear and he has very limited vision.

"I see like looking through a snowstorm, like a fog, it’s so hard, I have bad contrasts in my vision," said Livingston. "So if I want to look at my computer, I gotta have a black background with white letters to be able to see."

A 2018 report from the World Federation of the Deafblind estimates that about 2 percent of the population has some degree of deafblindness.

In Rochester, the nonprofit Center for Disability Rights launched a program half a decade ago that provides services to the deafblind. Many of these support service providers, or SSPs, use tactile signing or American Sign Language to communicate with deafblind people and help them with everyday activities.

Livingston uses SSPs to connect with the rest of the world. But in recent months, he’s received little or no service.

"Only three hours this month, and no hours last month or the month before,” Livingston said in June. "But it's difficult because all the drivers didn’t want to go out, so it is frustrating for some people, so I depend on my son and my wife to take me out at times."

Brooke Erickson leads the SSP program for the Center for Disability Rights. She responded to requests for an interview via email.

Erickson said the pandemic put the program in a tough spot. Some of the program’s SSPs had doctors' notes preventing them from working. And even when they are fully staffed, there are only 10 of them to handle the needs of 20 people.

Erickson said she told her customers in March that their SSP services would be reduced to only grocery shopping, medical appointments, and trips to banks starting in April.

"Luckily," wrote Erickson, "a lot of our Deaf-Blind consumers were very understanding and supportive. They told me that they would rather stay home and stay safe. If needed, they had families and friends to rely on."

Patty Starr also uses these services. Through an interpreter, she said that for much of the week, she doesn’t leave her house.

"What I miss most is that socialization,” said Starr. “That leisure time. That entertainment. Even just going out to lunch. Going out to buy clothes for myself. Those simple things. Those are things that I miss."

Starr is coping by taking lessons online and focusing on household chores. She’s also focusing on one of her long-term projects: digitizing and editing stacks of family photos, using a magnifier to see the images.

Starr is worried for others, though. She said the isolation is leading to more depression and mental illness among some deafblind people she knows. And she wishes SSPs would check up on them more.

But Starr said she does understand why SSPs would want to be careful during the pandemic.

"Because when you’re leading somebody who is blind," said Starr, "you have to hang on to their arm, and sometimes people get a little paranoid because hopefully people are coughing into their arm and now somebody else is touching that arm to lead someone. And I absolutely get it."

Erickson said these restrictions will likely be temporary. As New York state gradually reopens, and more SSPs can work, she hopes to expand services.

Woody Livingston said he expects his hours to go up this month. But he wishes he could have more.