As they prepared for their guests, the dozen or so volunteers at Saint Joseph's House of Hospitality gathered in a circle, clasped hands, and prayed for feet. 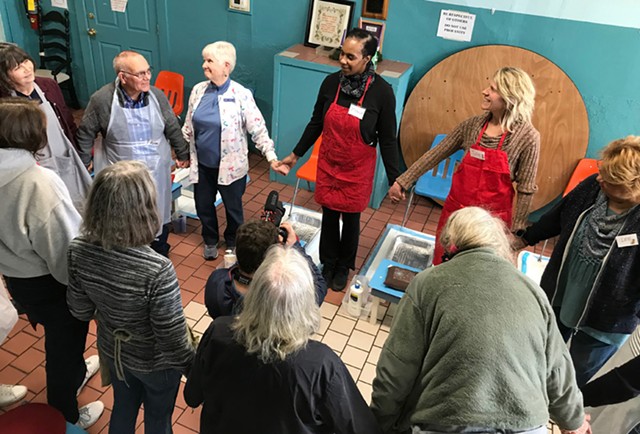 They already had the essentials — latex gloves, nail clippers, lotion, soap, foot basins, towels, and clean socks — lined up at 10 tidy stations with chairs around the perimeter of the room at the house, a soup kitchen and shelter on South Avenue in Rochester. All they needed was the feet.

Then they opened the door, and their prayers were answered.

Many of the feet that walked in were callused and cracked from cold nights on the streets. Some were sore and infected. Others looked swollen and raw. What those feet needed was some old-school – like biblical old – tender loving care.

The volunteers obliged. They knelt down and scrubbed, massaged, clipped, lubed, and chatted with their guests, as they have one Sunday a month in the fall and winter at the St. Joe's foot clinic for the last 27 years.

To observe the clinic in action is to be humbled. To partake in it, as washer or receiver, is an act of humility and courage. 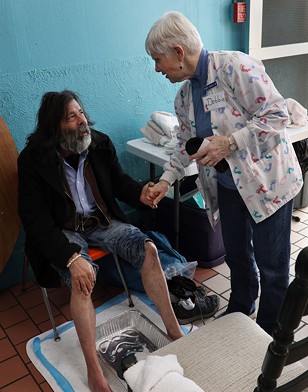 First, there is overcoming the age-old issues of awkwardness, hygiene, and odor. Then there are disparities in wealth and social status to be set aside. Mostly, though, there is conquering the fear of one's neighbor and devoting oneself to someone else's humanity.

"It still to this day takes some talking people into," said Debbie Sigrist, who founded the clinic. "Having your feet touched is a very personal part of the body. Most people are embarrassed. They'll say, 'My feet are too bad. You can't look at those.' . . . But we are all one. And the only way to get to know people is to break down barriers."

The practice of foot washing is as old as mankind, rooted in the hospitality customs of ancient civilizations in which sandals were the chief footwear. Hosts would provide water for guests to wash their feet and, if possible, a servant to assist. There are several such accounts in the Old Testament of the Bible.

But the ritual's place as one of soul-wrenching humility and submission integral to Christian doctrine was fixed in the New Testament.

The Gospel of John tells of how Jesus stunned his disciples at the Last Supper when he got up from the meal, wrapped a towel around his waist, and set about washing their feet in a basin. Some of them objected to the notion that their master should kneel before them and bathe the filthiest and perhaps most intimate part of their body.

"Now that I, your Lord and Teacher, have washed your feet, you also should wash one another's feet," Jesus said. "I have set you an example that you should do as I have done for you."

The practice of foot-washing ebbed and flowed throughout the history of the Catholic Church until 1955, when Pope Pius XII declared that the ritual should be inserted into Mass on Maundy Thursday, three days before Easter. Since then, the rite has been celebrated after the homily, typically with the priest washing the feet of a select few churchgoers.

In recent years, however, foot-washing has grown in popularity as an act of compassion during the Easter season and in many other settings.

Pope Francis in 2013 washed the feet of two women at a juvenile detention center in Rome in a notable break with tradition that had the pontiff washing only men's feet. Homeless shelters across the country, too, have added periodic foot-washing to their services for the needy. 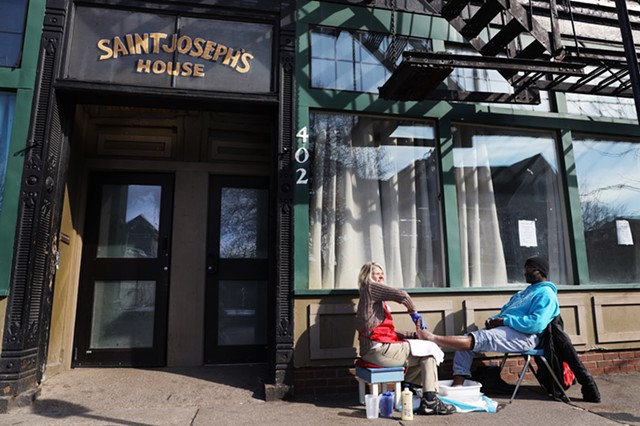 At St. Joe's, a Catholic Worker community, the practice is less a religious act in line with Catholic Church dogma than it is a spiritual undertaking in the vein of humanitarianism.

The clinic's guests, as they are known, often lead isolated and troubled lives. Some are intermittently transient. Others are chronically homeless. Many are afflicted with mental illness and have addiction issues.

"One man said something that I'll never forget," Sigrist recalled. "He said, 'You know, nobody ever touches me. I was thinking I was untouchable.' That stayed with me. That was crucial for that man that we were willing to sit down and wash his feet."

The idea of hosting a foot clinic came to Sigrist, a retired hospice nurse, in the early 1990s after reading an article in a nursing journal about the chronic foot conditions among homeless people.

Little has changed since then. A 2016 study published in the medical journal PLOS One reported that up to 65 percent of homeless people have foot ailments. Fewer than two thirds changed their socks daily, and one in four did not wash their feet every day, researchers found. 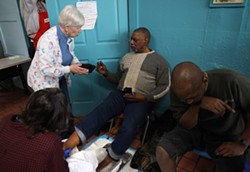 On this day, Ronnie Lewis Victrum, 59, a regular at the clinic who said attending church and therapy sessions keep him busy, lifted a foot from a basin of soapy water for a volunteer to examine.

The volunteer was Dr. Paul Merkel, a podiatrist, who set about scraping the calluses with a fine razor.

"Don't worry about it hurting," Victrum told the doctor, "because I've been through a lot of pain."

It was a gloriously sunny and unseasonably warm February day, and Victrum was being treated on the sidewalk outside St. Joe's.

One could be forgiven for likening the clinic to a spa. But volunteers are careful not to refer to their services as such. Spas in New York requires licensure. What St. Joe's offers is what clinic organizers call "comfort care."

Inside, Sigrist, dressed in a white smock dappled with tiny footprints every color of the rainbow, was part general and part traffic cop, focused on meeting demand and keeping the flow. A few dozen guests had walked in, some inspired by the sight of Victrum on the sidewalk.

It looked like any other day at the clinic — a blend of controlled chaos and compassion.

But it was a special day, too, for it marked the final time that Sigrist would be on hand. Closing in on 71 years old, Sigrist and her husband, Tim, a former director at St. Joe's, plan to relocate to the Albany area to be closer to their children and grandchildren.

Before the feet had arrived, Sigrist, a petite woman with close-cropped white hair and a voice like honey, was in an upstairs room decorated with oil paintings of former guests, as she put it, "sitting in the quiet" of her last day on the job.

"I'll miss it, but it's time," Sigrist said. "I am really aware now at my age of the importance of letting go . . . and simply saying thank you for the opportunity. I will carry it in my heart when we go."

The clinic will not go with her. Volunteers have pledged to keep it going under the leadership of Maureen Scahill, a nurse practitioner of infectious diseases at the University of Rochester Medical Center. Scahill said she plans to expand the clinic to the warmer months. 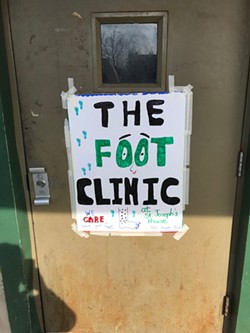 Scahill, 67, has a long history with St. Joe's. Her father, Thomas Scahill, was among the founding members of the house. He and his wife, Beatrice, Scahill's mother, lived upstairs and raised six children there prior to moving out shortly before Scahill was born.

"I was number 7 (of 13 children), so I'm pretty sure I was conceived up there," Scahill said with a laugh.

She spoke from the dining room off the kitchen on the first floor, where volunteers scurried about setting up the clinic around her. Scahill described her taking over as continuing the kind of service work her parents raised her to do.

"It's comfort care," she said. "It's human contact. The volunteers come from all different walks of life and I'm not always sure how they get here."

The volunteers this day were a mix of first-timers and veterans. Some of them Sigrist had spotted on the sidewalk and recruited to help set up for a few dollars out of her pocket.

"I try to help out where I can," said Henry Robison, 62, who lives in the neighborhood. "That's the only way to get to where you're going. You got to give back."

Tom Malthaner, 75, has been volunteering at the clinic for 20 years. He took up his spot nearest the waiting room door and got the first person to walk in. "It's a real privilege," Malthaner said. "It's just a beautiful thing."

His guest was Vernon Harvey, 54, who had never been to the clinic before. In the waiting room, he acknowledged his apprehension to indulge himself.

"It seems a little weird," he said. "But the truth is I used to pamper my ex-girlfriend's feet. This is my first time being pampered."

When Harvey took his place at Malthaner's station, Sigirst and the volunteers cheered him on.

"Let's have a round of applause to have the courage to do things that don't come easy," Sigrist said. "Do you want to tell us about your feet?"

Harvey chuckled and played along. "My feet are 54 years old and kind of ugly," he said.

"They're going to be beautiful when you get out of here," chimed in a first-time volunteer, Michele Crawford-Henderson.

Crawford-Henderson, of Rochester, had been introduced to the foot clinic through a friend, Julie Murante, who has been volunteering there for years. Crawford-Henderson brought her two sisters.

Like the other volunteers, they set up the clinic just so. The chairs for guests were color-coordinated — blue, orange, blue, orange — and swag bags of travel-sized foot care products were assembled neatly on a nearby table for the guests to take with them when they left. 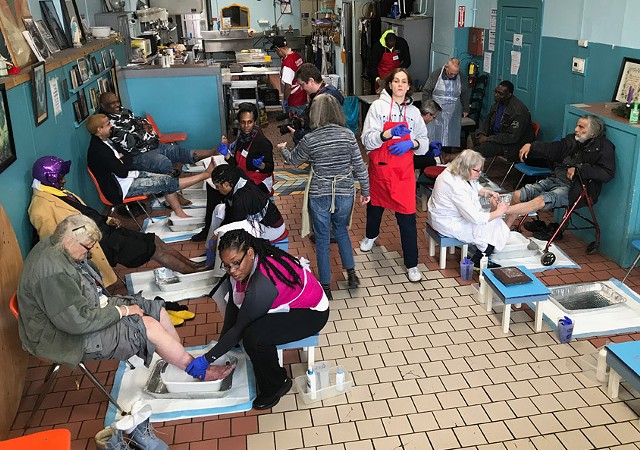 Moses Rivera, 31, noticed. He had never been to the foot clinic before that Sunday and said he was leaving feeling healthy and "refreshed."

"It's one thing to have a shower and wash your feet, but this is like a form of therapy," he said. "The whole environment, though, not just getting your feet done. The whole thing makes you feel good."