ILLUSTRATION BY JACOB WALSH The need for social justice has served as the backbone for New York's cannabis legalization effort.
Cedric Cotton was 14 when he fell in with the wrong crowd. He left his mother’s house, dropped out of school, and started slinging bags of weed on the streets of Rochester.

Like many dealers, he built a criminal record and served stints in jail on a variety of charges. Every time he was released and contemplated going straight, he found himself trapped in the same cycle: further from finishing school, finding a job, and ditching dealing. With each new charge was a new obstacle to building a better life for himself.

So he stuck with it. He felt he had no choice.

“A drug dealer is one of the lowest people on the totem pole, besides pedophiles and stuff,” Cotton said. “A person hears you’re a drug dealer, they say, ‘Oh, I don’t want him in my house, we don’t know what he’s going to do.’ You always go back.”

Cotton spent almost 20 years “hustling,” as he calls it, before leaving it behind in 2014. Today, at 43, Cotton looks back on his younger years with regret. He sees a young man who missed opportunities to attend school and develop a career.

His story is not unusual. The front on the war on drugs that focused on low-level marijuana possession has cost generations of people the chance at a better life.

This is particularly true for Black people, like Cotton, for whom the rate of marijuana arrests are higher than for whites, despite similar rates of cannabis use. 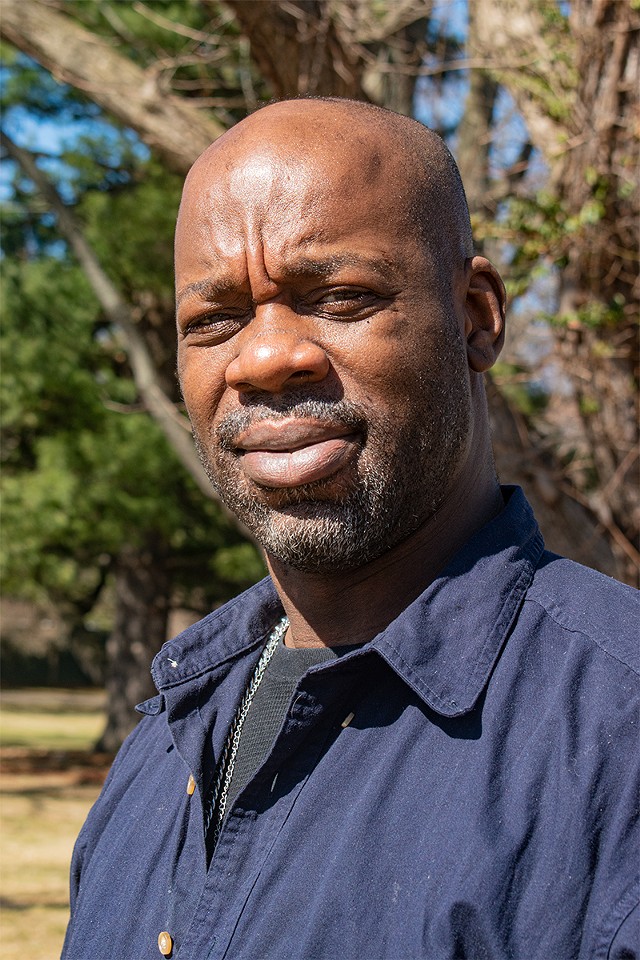 Legalizing the recreational use of marijuana in New York is often framed as a budgetary issue. Feasibility studies cited by the governor and legislators, who introduced their own dueling packages of legislation in 2021, projected a tax windfall of anywhere from $300 to $430 million annually.

But many legislators, including those with the most pull in Albany who pushed back on the governor’s measure, say they are motivated to legalize marijuana less by the creation of a new tax revenue stream than to exact a form of social justice that addresses the harms inflicted by current and past marijuana laws, chiefly on low-income neighborhoods whose residents are primarily people of color.

The disproportionate number of Black Americans jailed on marijuana charges is reason enough to legalize the drug, these legislators say. The focus of legalization, they say, must be on redressing damages and providing new opportunities in communities most negatively affected by the decades-long prohibition on cannabis.

On the negotiating table have been two bills, one supported by the governor called the Cannabis Regulation and Taxation Act (CRTA), and one backed by the majority
of legislators called the Marijuana Regulation and Taxation Act (MRTA), that has the support of not just the cannabis lobby, but lawyers, doctors, and civil rights activists. Legislators and the governor have since reached a final deal on legalization and that legislation will replace the CRTA and MRTA.

The MRTA envisioned expunging the criminal records of people convicted of possession, and funneling tax revenue from legal marijuana sales into resource-starved communities for vital services, education, and programs that help residents train for work, start businesses, and get in on the retail end of cannabis.

All of those provisions ultimately made it into the final plan for legalization.

“There’s addressing prior harm, and then there’s making sure as we’re moving forward New York establishes a cannabis industry that is rooted in economic justice,” said Melissa Moore, state director for the New York Drug Policy Alliance, a pro-legalization organization. “That has multiple entry points, as many avenues as possible for low-income New Yorkers, for New Yorkers who have been directly impacted by the drug war, to be able to participate.”

In 2019, the New York Civil Liberties Union released its analysis of state Division of Criminal Justice Services data on marijuana arrests between 2000 and 2018. The group found that Black people accounted for 52 percent of the arrests despite comprising just 14 percent of the population statewide. A study by the American Civil Liberties Union found similar disparities nationwide.

In New York, the worst disparity of any county was found in Monroe County, according to the report. Black people were 16 times more likely to be arrested on marijuana charges here than white people.

Legalizing cannabis has been shown to narrow the disparity. After New York decriminalized possession of small amounts of weed for personal use in 2019, there was a “really big drop off” in arrests in Monroe County, according to Public Defender Timothy Donaher.

Data provided to CITY by the Public Defender’s Office showed that it handled 28 marijuana cases in 2020, down from 191 in 2019, 467 in 2018, and 498 in 2017. Donaher acknowledged that the steep drop off in 2020 was somewhat artificially depressed by the pandemic, but said it could not be solely attributed to the health crisis.

Advocates of cannabis legalization have bristled for decades at the description of marijuana as a gateway drug. But marijuana has opened the door to more serious criminal charges being brought against consumers.

The plant’s pungent odor has long served as a legal pretext for police officers to search automobiles, as long as the officer believes that the search may turn up evidence of criminal activity. Through those searches, officers sometimes find more serious contraband.

“We see very often in the city, in Rochester City Court, people of color being pulled over and detained under the guise of there was an odor of marijuana,” Assistant Public Defender Jacquelyn Grippe said. “What starts as a routine traffic stop for something like speeding, running through a stop sign, all of a sudden turns into a full-blown search and seizure.”

In New York's final bill for legalization, the scent of marijuana is no longer enough to justify a search.

Mayor Lovely Warren said in an interview that over-policing and disproportionate arrest rates have created cycles that have kept people trapped in the criminal justice system.

“It’s just a vicious sort of treadmill that we have people on,” Warren said. “Our hope is that reinvesting in these communities and reinvesting, most of all, in the people in the communities, that we’ll be able to change that generational cycle.”

Like the CRTA and MRTA, the final deal between Cuomo and New York lawmakers includes provisions for social equity investments. The proposal funnels 40 percent of marijuana tax revenues into education, another 40 percent into vital services and programs for communities hit hardest by cannabis prohibition, and the remaining 20 percent would fund drug education and treatment programs.

In Rochester, Warren already has plans to put $2 million to $5 million of cannabis tax revenue into a pair of initiatives. Her proposed Housing First Trust Fund would provide city residents with home ownership and housing assistance while her proposed Equity and Recovery Agenda Emergency Fund would provide $2,000 microloans for families in need.

“Our focus would be on direct access, directly to the people that live in the communities that have been most impacted,” Warren said.

Democratic state Senator Jeremy Cooney also said he believes the tax revenue from marijuana sales needs to be used to lift communities up, not bolster the state’s general fund.

“What I want is to make sure, in the MRTA for example, we break out areas like education, workforce training, things that will actually empower communities of color to break generational poverty,” Cooney said.

Elected officials, activists, and community leaders have also offered ideas and proposals for how New York should use its revenues from legal weed taxes. For example, the legislature’s bill would have directed some marijuana revenue into a “community grants reinvestment fund,” which would provide grants to nonprofits and government programs specifically in neighborhoods disproportionately affected by the criminalization of marijuana.

Legislators had also proposed a public health initiative, funded by cannabis revenue, targeted specifically toward educating young people about drug safety. The reinvestment fund and the commitment to fund drug education programs both made it into the final bill.

And in Monroe County, Special Assistant Public Defender Danielle Ponder and Spiritus Christi Prison Outreach Director Damond Wilson, both of whom serve on the city-county Commission on Racial and Structural Equity (RASE), recently floated a plan to fund a reparations initiative with cannabis revenue. Their proposal would create a community chest for Black county residents that provides funding for entrepreneurs, housing, and a variety of other needs.

“The average black family's net worth is ten times less than the average white family, with the possibility of becoming more disparate in the wake of the pandemic,” the letter reads. “This disparity will continue without the introduction of economic equity laws and policies, better known as reparations.”

BUILDING A MARKET FOR ALL

What Cotton, and many other people, want of legalization legislation, are provisions that help dealers and growers who have long supplied the unregulated market break into the legal market.

“I would like to see a lot of people opening up small businesses to try and make money and put it back into the community,” Cotton said. “Some people have years of experience already . . . some people been doing it 20, 30 years, and are still doing it.”

State legislative leaders take a similar position —the final bill would require 50 percent of initial licenses to be given to social equity applicants.

Cooney, who co-sponsored the MRTA, said eligibility criteria should include race, prior convictions for marijuana charges, and residing in a community that has been disproportionately affected by the stringent marijuana laws of the past.

“It’s just so blatant to me that we need to do something specific,” Cooney said.
Many of the 15 states that have legalized recreational marijuana have similar “restorative justice” plans. In many cases, however, these programs have not delivered on their promises.

For example, in 2019 Los Angeles launched a social equity program aimed at giving 100 pot business licenses to people either with marijuana charges or from a community hit hard by past laws. But the program has been mired in controversy.

Less than 20 of the approved licenses were reportedly given to Black business owners. Additionally, small business owners often had to wait for months to receive their license, all the while renting out vacant storefronts they were required to have just to qualify for the license.

Illinois officials also promised priority access to licenses for people either harmed by marijuana criminalization or who lived in affected neighborhoods. Sales started in January 2020, but a year later the Chicago Sun-Times reported that not a single licensed marijuana business in the state listed a person of color as its majority owner. One state lawmaker there called the program “an epic failure.”

Cannabis sales hit $1 billion that year and weed giants including Cresco Labs, PharmaCann, and Green Thumb Industries have been able to swiftly enter the legal market and dominate.

New York’s cannabis advocates fear a similar situation could play out here. They worry that the big medical marijuana companies such as Columbia Care will leap into the recreational business and take total control of that market once it opens.

To counter that, Cooney supports “capping” the participation of large companies in the legal market, in part by limiting their number of dispensaries.

“That is how you allow them to participate in the market without allowing them to dominate the market,” Cooney said.

Both Cooney and Warren are supportive of “incubator” programs that would assist small business owners in getting their cannabis companies off the ground without the initial, costly overhead.

Cotton said that creating pathways for everyday people to participate in the legal industry is a given.

“They always cut the little man out, that’s what we don’t want,” Cotton said. “We don’t want a lot of big corporations to come in here and take the money from the Black community, and take it where? That’s like defeating the purpose.”