Snack attacks at House of Whacks 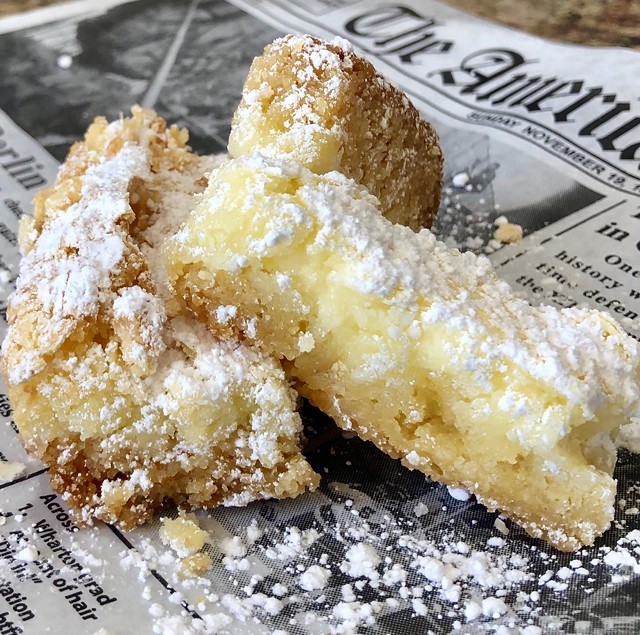 The Cracked Cake looked like an ordinary lemon square covered in powdered sugar, but the chef promised it was more.

“Imagine that pudding and cheesecake had a baby,” was how Es Davy described her signature dessert at House of Whacks, a new restaurant in the St. Paul Quarter that specializes in comfort foods both savory and sweet.

“That baby ascended to heaven for three days and was touched by God,” Es D, as she prefers to be called, went on. “It came back to Earth to become Cracked Cake, to bless everyone with its presence.”

Without having witnessed the ascension, I can’t vouch for her claims of otherworldliness. But it tasted divine.

House of Whacks, which opened in the flatiron building at the corner of Andrews and Bittner streets in April, will be known for its waffle dishes, but its menu is a study in contrasts. Waffle creations are prominent, but there are also Caribbean-inspired oxtail or pot roast lunch plates, fruit smoothies brimming with color and flavor, and rich and gooey, hit-the-spot mac ‘n’ cheese. 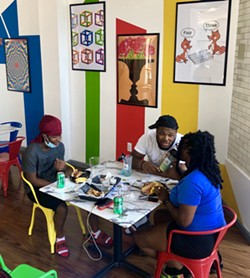 All of it is prepared and presented for diners on the go, but the cheerful decor beckons one to sit and stay a while. Flooded with natural light from windows on both sides of the building’s wedged storefront, House of Whacks has abundant seating in bold primary colors reminiscent of a playground or an ice cream parlor. The logo on the door — a red, green, blue, and yellow abstract grid of a waffle — complements the light-hearted atmosphere.

When it opened, the place seemed an instant hit, enjoying a flurry of foot traffic for days. On its first Friday in business, the restaurant had sold out of everything on the menu but waffles and milkshakes. Two months in, the lunch rush remains quite brisk, particularly on Fridays.

Eventually, the Davys expanded their catering service under the zany name “Whacky Waffles House of Whacks.” They had planned on popping-up at the festival circuit last year, but the pandemic derailed that idea.

“We weren’t planning on opening a restaurant at first,” Dae said. “We had just applied to all the festivals for the spring and summer, but then COVID hit.”

When the storefront at Andrews and Bittner went on the market, the Davys saw an opportunity. The place had recently housed a café and didn’t need much renovation. A few splashes of color later, and a slight modification to the name of their business, and the Davys had “House of Whacks.”

On the day I visited, the corner was bathed in a blend of aromas of waffle batter and cinnamon, courtesy of the homemade honey-cinnamon butter that tops the waffles. The scent intensified inside and had an unexpected relaxing effect on me.

I ordered the Chicken and Waffles ($12) — two crispy and juicy chicken breasts that span the diameter of the waffle, served with syrup and that honey-cinnamon butter. Melting the butter between the chicken and the waffles is the best way to take in the combination of the savory breasts and the sweet squares of syrup-soaked waffles.

Another staple of the menu is the breakfast-friendly Wafflewich ($10). It is a waffle split in half and stuffed with two eggs, cheese, lettuce, tomato, onion, and a choice of bacon, sausage, or turkey sausage. The sandwich is a small mountain that requires a large container, even for the leftovers.

Big eaters might be tempted by the House of Whacks meal that comes with a main dish, a drink, and a dessert for $15. I tried the steamed fish with rice, a dish inspired by Dae’s Jamaican upbringing. It was a snapper filet saturated in the semi-sweet flavors of peppers, okra, and a house spice blend. A piece of sweet corn bread and a side garden salad rounded out the meal.

For dessert, I sampled three options: the Banana Nut Pudding, the Strawberry Milkshake Cake, and, of course, the heavenly Cracked Cake. All three are Es D’s own creations.

The pudding is chock full of fresh-cut bananas and vanilla wafers drizzled with caramel. The Strawberry Milkshake Cake is a lot like a strawberry shortcake; a light vanilla cake base is topped with fresh strawberries and a whipped topping that Es D makes each morning. Then there was the pudding and cheesecake’s celestial baby.

Eighteen-months ago, Es D and Dae had their own baby — a little girl. So, for now, they’re running the business with the help of family members when possible and currently closing on weekends to be with their daughter.

That still leaves you a window of eight hours a day, five days a week to satisfy your sweet or savory craving.

Chris Thompson is a food and culture contributor for CITY.
Feedback on this article can be directed to Rebecca Rafferty, CITY's life editor, at becca@rochester-citynews.com.