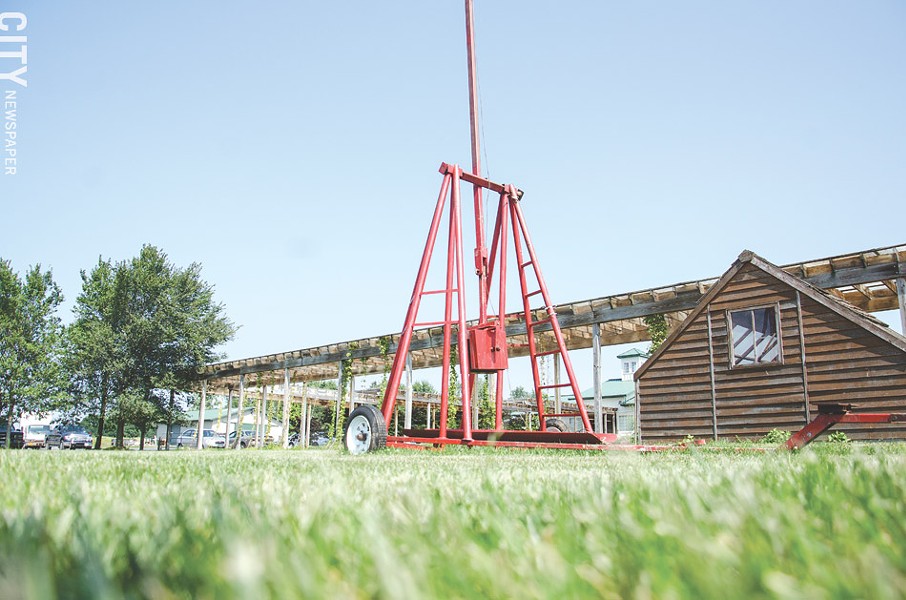 For a moment, it's just a blip in the sky — an orange sphere that's very much out of place. In this exercise, only one thing is consistent: Things will not end well for the pumpkin.

Fall has long been the season of the gourd. Pumpkins are the stars of spice lattes, pie, and farmers grow them so large that they're no longer measured in pounds, but in tons. But the simplest pleasure when it comes to the pumpkin is — cue Billy Corgan — smashing it to smithereens.

"Who wouldn't want to launch a pumpkin into the air and watch it smash into a million pieces?" says Rachel Banko, an office manager at Grossmans Garden & Home in Penfield.

Grossmans is no rookie to the pumpkin chunking (or punkin chunkin, if you want to rhyme) game, the business has been hosting these events since 2001. The store's owners at the time saw the chunkin fun on the Discovery Channel one day and figured it'd be a fun thing to bring to Rochester, Banko says.

There's certain child-like joy to punkin chunkin. The sport basically enlarges Bart Simpson's famous slingshot to a size that towers above the people shooting it. And it's not pebbles that are fired by the contraption, it's pumpkins that are launched at wooden targets, and sometimes even cars, says Grossmans co-owner Erika Stone (she and her husband, Jon, have owned the store since February).

At Grossmans, the pumpkins are flung with an impressive red trebuchet. This destroyer of pumpkins — known simply as the "Pumpkin Launcher" — stands in front of a field that stretches 200-feet. The field is off to the side of the main store and the farms that adorn the Grossmans' property. The "Launcher" uses a counter weight to hurl the gourd toward its destiny.

On chunkin day — which is usually in October — things begin when the customer attempts to pick the perfect pumpkin to destroy.

"There are targets throughout the field and you have to consider the size, weight, and I presume, even the shape of the pumpkin, in trying to have it land in just the right place," Stone says.

Grossmans employees load the pumpkin, and the customer launches the gourd by pushing "GO" on a remote control from a safe distance away. After the button is pressed, there's no turning back. Again, things don't end well for the pumpkin as it explodes against the targets in a manner that inspires plenty of fist pumps. While the "Pumpkin Launcher" doesn't compare to the incredible scope of some contests around the world — the record distance is well over 4,000-feet — it does involve skill, along with smarts.

"It was interesting to see the math involved in hitting the target," Vinnie Nenno, a Grossmans employee, says of past year's events.

When the "Pumpkin Launcher" is doing its thing, the crowd attracted to the event is diverse, Banko says. While it's sometimes known as an event aimed toward children, it's something that brings a smile to most people's faces.

"Kids love it, and the event does attract many families," Banko says. "Don't let the adults fool you. They love it too."