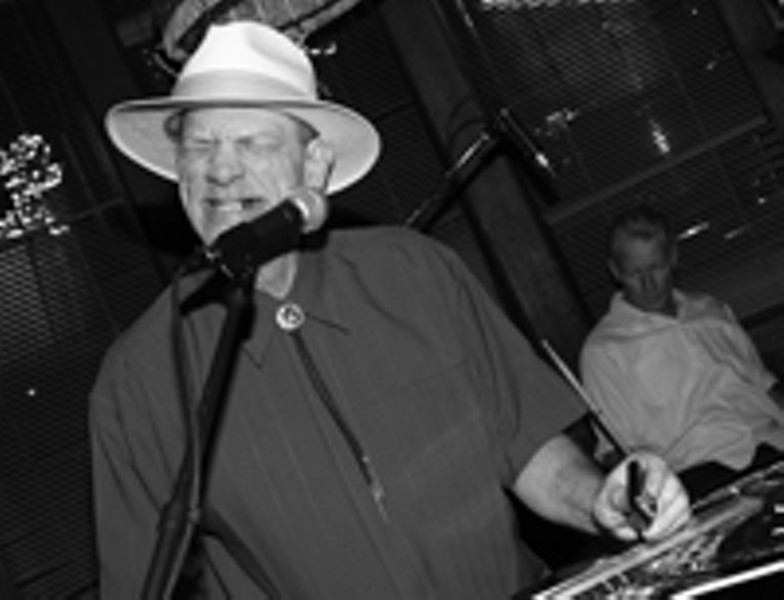 Frank De Blase Slim picks and grimaces at the Dino

Dressed in a day-glo blue suit that would've made Iceberg Slim proud, Watermelon Slim brought some of the best blues I've seen in The Dinosaur BBQ in a long, long time. Last Wednesday night, before a packed house, the man freight-trained the harp, threw periodic tantrums (of the raving Pentecostal variety) on the dance floor and diddled on a dobro --- laid out southpaw on a table --- using various bottles of hot sauce and poison as slides. Slim spoke of mojo, fallen masters like Sonny Boy Williamson, and his affinity for life on the road with 18 wheels beneath him. His OKC-based outfit was retro-cool and razor sharp. Drummer Michael Newberry (ex-Fortune Tellers) was just incredible as he thumped and snapped beneath a slick, tight and snow-white DA 'do while the rest of the cats swung in the pocket like Ferguson-era T-Birds. I danced my fool head off.

Saturday night Blue Jimmy was rockin' Richmond's postage stamp. It amazes me how these five guys can pull off six-part harmonies. Equally amazing was the rather indifferent crowd, who seemed more caught up in the TV than the band. Regardless, Blue Jimmy plugged away with its trademark nonchalant Americana. The songs are simply beautiful. The band needs to hit the road and spread the word to places where perhaps the boob tube doesn't reign supreme.

Pittsburgh's Motorpsychosadhere to the whole punk/metal hybrid --- on vinyl anyway. They were definitely metal Saturday night at the Bug Jar when they headlined a quadruple bill with Four Barrel Ghost, The Blastoffs, and The Grinders. The three-woman front-line assault was absolutely brutal with both guitars shredding at Live At Leads levels, textbook head-banging, and a guitar player that looked like a Mick Mars doll stage right. The band's segues were awesome --- that is, there were none as they pounded relentlessly for an hour. The Grinders, despite very little blood in their alcohol stream, brought folks to the front of the stage with a raucous set of Grinder classics and an America cover everybody seemed to know word for word.