Simeon Banister looks to make his mark on Greater Rochester 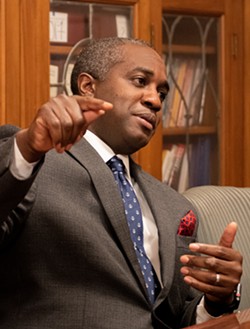 Few people can point to a life-defining moment that happened to them when they were 9 years old.

Simeon Banister, the new head of the Rochester Area Community Foundation, is one of the few.

It occurred on a day that his mother, the well-known Rochester educator Iris Banister, took him downtown during the holiday season. When he saw the mannequins in the Sibley’s department store window, he remarked that they didn’t look like him — he’s Black and the mannequins had light skin tones. He recalled that his mother encouraged him to write the store and the Democrat and Chronicle about his observation.

Two weeks later, his mother brought him downtown again and Sibley’s had mannequins with a broader array of skin colors in the windows. The newspaper’s editorial page recognized Banister as the catalyst for that change.

“As a 9-year-old, when something like that happens it gives you a real sense of agency and a sense that things can change and they can be made better,” Banister said as he sat in a bright, wood-paneled, bookshelf-lined meeting room inside the Rochester Area Community Foundation’s East Avenue headquarters.

That lesson has become particularly relevant as Banister, 40, settles in as the new president and chief executive officer of the Community Foundation. He’s the first Black person to lead the philanthropic organization that had been overseen by Jennifer Leonard for 30 years before her retirement in September.

The foundation administers 1,500 funds that collectively hold more than $600 million in assets, and provides grants to nonprofits that are working to address racial equity, poverty, and community vitality across areas such as education, arts and culture, historic preservation, and more recently, environmental justice.

Banister started with the foundation five years ago as a senior program officer for equity, a position he pursued at the urging of several people, and rose through the ranks.

Even before he started at the foundation, however, he’d been making his mark on the Greater Rochester area in ways big and small.

He’s the longtime chair of the Greater Rochester Martin Luther King Jr. Commission, which organizes annual Juneteenth and Martin Luther King Jr. Day commemorations. A former Henrietta resident, Banister also served on the Rush-Henrietta school board and was part of a small group that revived the dormant Henrietta Democratic Committee and made it a force in local politics. He now lives in the South Wedge with his wife, Akilah, and their children, Julian, 9, and Olivia, 5.

The thread that runs through all of Banister’s work is, in his words, “a deep belief in the fact that Rochester can be strengthened and it can be made even better, and that our best years really are ahead of us.”

Former Rochester Mayor Tom Richards, who chairs the Community Foundation’s board, said the board considered a nationwide search for Leonard’s replacement but opted to promote Banister after compiling a list of qualities the members wanted in the organization’s next leader. They wanted someone with internal management skills, but also someone who could represent the foundation well across several key sectors and serve as a convenor, Richards said.

That Banister was known in many circles, both to donors and grant recipients, also worked in his favor.

“The idea is to bring people together to convince them of things without lecturing them,” Richards said. “And I think he’s mastered that.”

Banister, like many community leaders, refers to Rochester as a city steeped in innovation, starting with the formation of Kodak, Xerox, and Bausch + Lomb. But now, he said, the community needs to innovate around equity and the foundation can play a unique role in bringing different people and groups from across different sectors together to work cooperatively.

What does that look like? Banister and the foundation have a template. For example, the organization partners with the Ralph Wilson Foundation on youth sports programs, an area Banister said is crucial for youth development. He and the foundation also helped launch the North Star Coalition, a group representing philanthropic, business, labor, political, nonprofit, religious, and educational organizations that’s working to ensure that federal pandemic recovery funding makes it into marginalized communities in the Rochester region. 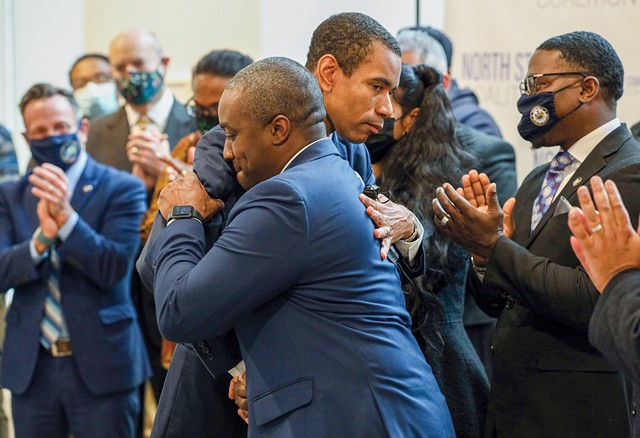 In the past, massive federal stimulus programs such as the New Deal left out people of color or ushered in discriminatory programs.

“We kind of have done this before, we know this story,” Banister said. “The question is are we going to do it in ways that are truly equitable and inclusive.”

He also believes that good data is important to helping Rochester at large become more aware of challenging issues, such as poverty and its far-reaching effects. ACT Rochester, a program of the foundation, releases annual reports on various community indicators which have raised awareness about the extent of problems and what progress, if any, the community has made on them.

“Our job isn’t to falsely proclaim things are getting better,” Banister said. “Our job is to identify where there are actual and accurate things that are improving and to highlight those, to point out where there is regression, and call attention to those areas so that we can stamp it out and progress.”

Moving forward, ACT Rochester will likely expand beyond reporting data to conduct more research and analysis to try to identify root causes of problems the Rochester region faces and to provide communities with facts they can use to inform their decision making.