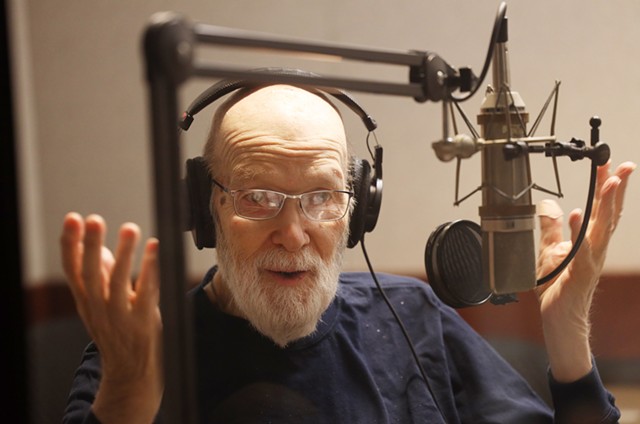 Summing up 85 years of a man’s life — especially if he’s a bit of a Renaissance man — into a pithy phrase to be printed on the front of a T-shirt isn’t easy.

But the one on the shirt Michael Lasser got from Ruth Phinney, his co-worker at Rochester’s WXXI classical radio station, nicely hits on a career milestone: “Ask me about my Peabody.”

“What I’ve always loved about it,” Lasser says, “is it sounds vaguely dirty.”

Read into it what you want. Just as you may read what you want into so much of the music of the Great American Songbook, celebrated by Lasser for four decades on his nationally-syndicated weekly radio show, “Fascinatin’ Rhythm,” for which he won a coveted George Foster Peabody Award in 1994 and which he’s bringing to an end with a final broadcast on June 26.

The award, which honors storytelling in broadcasting that reflects the social issues and emerging voices of our times, was a nod to something much deeper than the bouncy melody of “Surrey With the Fringe on Top.” In presenting Lasser with the recognition, jurors said his program was a vivid example of what a listener described as “radio essays with songs used as illustrations.”

“That’s how I’ve always thought of it,” Lasser says of that description of his show. The award “was about the way in which the commentary brought the songs alive. There’s an element of social history in those programs.”

Broadcaster, teacher, theater critic, lecturer. Lasser is a writer as well. He has freelanced for CITY, has written three books, has a fourth at the publisher, and is working on the fifth, “Lovely Day Tomorrow: The Lasting Appeal of the Great American Songbook.” All words about music that seems frozen in time.

Yet change is a constant. Grief is a part of it. Lasser lost his wife, Elaine, 21 months ago. There is a sense of urgency now. Time must be used wisely.

“One of the reasons I stopped doing the show was I didn’t want to work with a deadline anymore,” he says. “At 85, I think I’m entitled. But I also love these big projects, a book. I just have to learn to write faster. At my age.”

The show — originally called “Anything Goes” — was first broadcast on WXXI in November 1980. At its peak, it was being carried by 35 to 40 stations nationwide.

“At first it was much more focused on the Broadway musical,” Lasser says. “But over time, I broadened it to include the full range of the Great American Songbook, meaning commercial mainstream popular music, 1920 to 1950. Between the wars, essentially. And then I cheat, I go back to the first years when ragtime and jazz and the blues were shaping the music, and after 1950, when someone like Stephen Sondheim, who is certainly part of the songbook, is still working.”

The songs are a soundtrack to the times.

“Not only in the feel of the song, but in the content of the song,” Lasser says. “I distrust parceling out understanding of history, decade by decade. But it works here. The ’20s was the party after the war that will end all wars, and the party was going to last forever.”

America partied on to “Ain’t She Sweet” and “Five Foot Two, Eyes of Blue.” But then came the ’30s, marked by the Great Depression and a march toward a second World War, and the songs got “smokier and darker,” Lasser says. By the ’40s, Lasser says, “the sense of loneliness and the longing in them is palpable.”

At the risk of sounding like an old man yelling at those kids to get off his lawn, they don’t write songs like they used to, Lasser says. He despairs over the lyric writing of today.

Perhaps “Can’t Buy Me Love” and “A Hard Day’s Night” aren’t a part of the Great American Songbook because they were written by English songwriters. Lasser, though, says something was lost in the British Invasion and the music that followed.

Lasser concedes that the songs of Sondheim and Irving Berlin are “obviously not the center of musical attention anymore.” But that does not mean they cease to exist.

“Take your grandkid, who is up on whatever is ‘in,’ knows hip-hop, knows whatever the rage is at the moment — and he should! It’s where his focus should be,” Lasser says. “Take him to a revival of a Broadway musical, take him to see ‘Annie Get Your Gun,’ take him to see ‘Cabaret’ or whatever it is. Doesn’t matter what it is, assuming it’s age appropriate, and watch the delight spread over the kid’s face.

“I understand when he and his friend go to a dance, they’re not going to listen to ‘Surrey With the Fringe on Top,’” he goes on. “But the pleasure is there, the richness of the music and the lyrics is such that, if you listen, how do you resist it?”
For the songwriters of today, Lasser says, “authenticity has defeated craft.” The lyrics, he says, must merge with the music to create that third entity: the song.

While popular music since the 1960s increasingly focused on social issues, the Great American Songbook has few entries such as Berlin’s “Supper Time,” a song about a lynching.

“That was not what they did,” Lasser says. “These songwriters were not only craftsmen, but businessmen. They formed their own publishing companies, because that’s where the money was. A lot of them were Jewish, they were immigrants, they were mostly the children of immigrants, they were connected to that world. But it’s rarely in their songs. Because they wanted to sell a recording to every American who had enough money in his pocket to buy a record.”

A major theme of their work became the universal language of love.

“I think it’s the subject of every song and every short poem going back to Sappho,” Lasser says. “Love and sex and romance are things we’re interested in because… they’re interesting.”

Such songs are what he calls “a frozen moment — one-act plays or paintings” that had implied narratives and could be “gloriously inauthentic.”

Berlin and George Gershwin weren’t writing about themselves. Nor was Cole Porter, who was gay. Weaving his experience into his lyrics would be acceptable today, but not in his time. 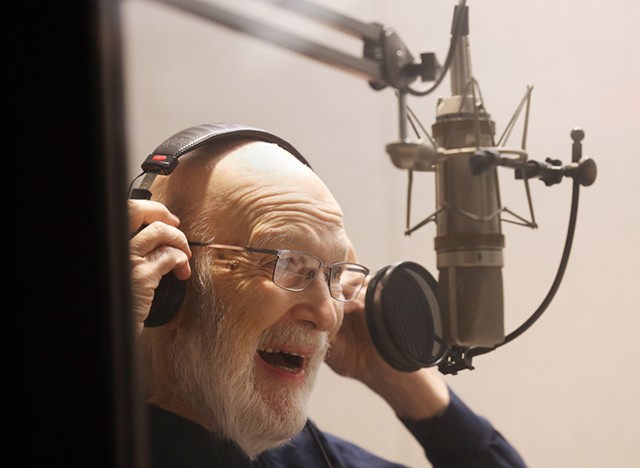 What Lasser brought to his show was, in some part, simplicity as a deception.

These days, though, with the pandemic loosening its grip on the nation, Lasser goes out to eat at restaurants with friends and even visits his daughter in Connecticut on occasion. When he can’t see her in person, he Zooms with her. He is a voracious reader, often reading in bed for two hours.

He recalls someone who had been a widow for a long time offering him some advice shortly after his wife died that has stuck with him.

“You know how people say you’ll heal in time?” he recalls her saying. “She said, ‘They’re wrong. This is the one you don’t get over. But you learn to live with it.’”

Lasser has spent the better part of two years learning to live with it.

Yet life offers Lasser no choice other than to move on with his own life, and set aside “Fascinatin’ Rhythm” — a show that sometimes suggested it’s easy to write simply, yet hard to write simply in a way that calls forth emotions.

Berlin mastered it. After 85 years, Lasser has lived it.