Sharing the muse in Multibird

$7 | 270-8106 | theskylarklounge.com
faergolzia.com
Seth Faergolzia's Multibird is a magnificent, multi-genre-defying, multi-genre-defining operation. It is odd and it is contrarian. Every style and subgenre this quartet leans into could be more easily understood if they were prefixed with the words “anti-” or “freak,” or if those adjectives were treated more as actual genres.

Faergolzia, who wields the baton at the heart of this oddball parade, is a boisterous, gentle giant who does a bit of everything.

When we sat down and talked with Faergolzia back in 2018, he was working on a puppet play, a project where he challenged himself to write 100 songs. Multibird was also coming into its own, standing in sharp contrast from his other, much larger band, 23 Psaegz. 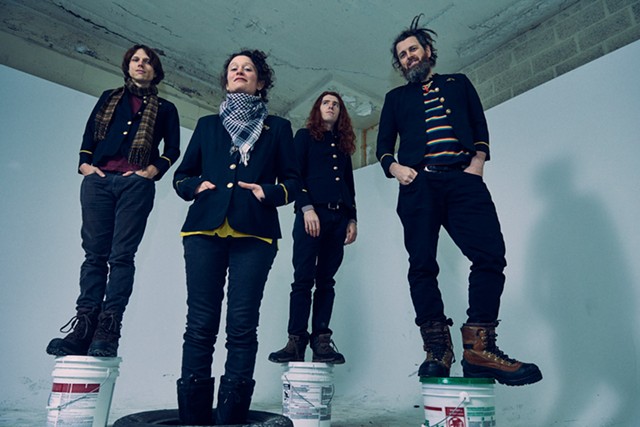 The band members are also preparing to leave on a five-week tour of Europe that will take them to Germany, Switzerland, Austria, Belgium, the Netherlands, and France. Their bags are packed.

The band is a soundtrack to a kaleidoscope and Faergolzia is jazzed about the dynamic changes going on in Multibird’s sound.

“The band has changed since we recorded the album actually,” he says. “It’s a very different dynamic. The first lineup felt kind of like four buddies and this lineup feels like family, if that makes any sense. This new album feels like everyone’s all in.”

Now he’s not the only one working until they’ve got it right. Now it’s their muse as well. As proof, Faergolzia says, they have got four fully collaborative tunes together now that they plan on recording right after they return from Europe.

The new Multibird album was recorded at Black Dog Recording Studios in Rochester and John Kilgore Sound & Recording in New York City. Some of the songs generated by Faergolzia’s 100 songs project wound up on the new album.

The songs on this eponymous release each possess their own beauty, and Faergolzia’s epiglottal push adds curiosity, quirk, and drama to each one of them. Both studios rolled with this dynamic weirdness and the band’s oddball take, what with its dynamic twists and its non-conventional roll. This focus, according to Faergolzia, really mattered to the band.

“I think the studio is really important,” he says. “You need a comfortable climate for the engineer and musicians to have a good rapport. We recorded this album kind of live with the four core musicians.”

“Once we lost our drummer, Dominic Marini, guitarist Shaun Jones started playing kick and snare with his feet, sort of one-man-banding it,” says Faergolzia. “And I’m adding more loops with my voice. And our bassist and trumpet player, they also play drums. We don’t have a drummer, but we have three people playing drums.”

And one playing jaw harp.

“Shaun Jones is obsessively playing the jaw harp,” says Faergolzia. “He’s started making them, too. He’s starting his own jaw harp company. So we’ve got a couple of jaw harp tunes.”

The instrumentation is clearly gonzo-eclectic. And according to Faergolzia, so is the writing. There ain’t a formula.

“As far as my writing goes, I try to stay in a semi-dream state,” he says. “I don’t like to think too consciously about my work. If I start overthinking it, I might finish it out, then abandon it. It’s really important, too, for me to follow through. But a formula? Throwing in a dash of this, a dash of that... I don’t really follow a specific way. I guess you can tell that from the variety of songs; I like to speak multiple languages. I try not to think about it. I just let it go. I appreciate all music if it’s of good quality.”

It’s while talking with Faergolzia that you remember the puppets; this guy still has a puppet opera on deck. What gives?

“Yes, they exist,” Faergolzia says. “I just need the music. I’ve come to a point where I need to record the audio. I need to hire musicians. It’s written for 15 people. It’s about transformation and growth — it’s constantly changing. It’s poetry; free association, stream-of-consciousness poetry. So I took that and assigned seven characters to it.”

First he did paintings of the characters.

“Then I took all the lyrics from the poetry, and I sat in the woods every day the whole summer and wrote a synopsis with those characters. The poetry tied the whole story together.”

As we speak, Faergolzia is working on a cluster of quieter songs, gentler songs, as well as a one-off album with stars of local acoustic music.

“Record the album, play one show, and that’s it,” he says. “It’s all freedom through art. We’re physically restricted. Our bodies can’t do everything we want to do. We’re financially restricted. All these restrictions on us, but our minds are able to be free. You can meditate. Art is the means I find my freedom and trying to help others achieve that state.”