Get to know your local drag queens

While Rochester's Darienne Lake is getting national attention on "Drag Race," our own local drag scene remains stocked with many talented, gorgeous, funny queens. Below find an introduction to some of the other first ladies of Rochester drag.

Be sure to check out slideshows from drag shows at Tilt Nightclub and 140 Alex at the bottom of this article.

Inspiration for your drag name: Samantha was derived from my boy name (Sam), and when I first did drag Yolanda Vega had risen to stardom locally. I also wanted my name to read very Latin, so Vega gave it that Latin flavor that I cherish so much.

How many years have you been doing drag? I first did drag in the mid-1990's when I was in college at RIT. I performed at a couple of clubs on amateur nights (Club Marcellas, Atlantis, Anthony's 522, etc.). I took a break while I was in grad school, and upon my return to Rochester in 2002 the itch brought me back to the stage. Is there a cream for that?

How would you describe your style? I like to reinvent pop-culture characters and give them a little twist of my own. (There are millions of ways in which Disney princesses can be so raunchy!) I also like dancing and I am addicted to 90's music, and of course love my Latin music! I favor drag makeup to fish make-up, or camp make-up. I paint accordingly.

Favorite songs to perform: "Let's Get Loud" by Jennifer Lopez. It's a fun festive song, makes me dance, and it ALWAYS gets the crowd in the mood. It's a super happy song and a crowd pleaser — without the need to compromise to crappy current Top 40.

What has been your favorite drag experience? The pinnacle moments of my drag experience have been my winning moments at the pageants. Three in particular come to mind: Miss Gay Rochester 2007, Miss Gay Syracuse 2008, and Miss Muthers. It's always great to be recognized by your peers and people in the industry, and of course the fans.

When/where do you usually perform in Rochester: I perform regularly at Tilt Nightclub and Ultralounge. We have shows there every Thursday night and Saturday night. Shortly, I will also be performing at Tilt's Latin Party, Baila Fridays, which will take place at the club twice a month on Fridays.

Website for more info: Facebook.com/QueenSamanthaVega is where it's at!

Inspiration for drag name: It actually came from the RuPaul Book of Drag! It's also close to my real name's initials, and "Triple D" is just about right for my breast size.

How many years have you been doing drag? This is my 16th year!

How would you describe your style? Some would say "campy" or "clown drag." I just call it my own style. I enjoy playing with make-up. I have many feminine features in drag, but in the end, I'm just a dude wearing make-up, and I'm totally OK with that.

What has been your favorite drag experience? I really love performing at local colleges. I enjoy making people laugh and bringing people together.

When/where do you usually perform in Rochester: I host the Thursday night show at Tilt Nightclub. I also run a monthly Saturday WCP (Wild College Party) at Tilt. I also perform at many local college shows.

How many years have you been doing drag? I have been doing drag on the "professional circuit" for 10 years. I started much earlier in life when I was married to a woman, but she was a size 10 and I'm more of a 16-18. So ya know, it would have never worked out.

How would you describe your style? "Lord and Taylor/Von Maur mother of the bride."

Favorite songs to perform: The classics — Judy, Tina, Liza, Bette. Those DIVAS who sing to every beat of my middle-aged heart.

What has been your favorite drag experience? My favorite drag experience has been with the fabulous Aggy Dune with our show, The Big Wigs. It's been a dream of ours to take divas our way and break out of performing only at the gay clubs, and to make drag a fun experience for all, young and old. (That and, when I first met Aggy, she told me, "Kasha don't be afraid to TRY and look pretty." We've been gal pals ever since.)

When/where do you usually perform in Rochester: You can catch our schedule on our website, maintained by Mr. Davis, my fabulous husband, at www.thebigwigsshow.com. Also, you can catch "Being Kasha Davis," my video blog on YouTube, where you can watch Mr. Davis and I from the comfort of your own lazy boy. Cheers! And remember, THERE'S ALWAYS TIME FOR A COCKTAIL!

Inspiration for your drag name: I absolutely love Kylie Minogue! I wanted to pay tribute to her, but not steal her name, so Kyla was pretty close. I'd read that "Minx" was one of her nicknames, so I DID steal that!

How many years have you been doing drag? Five or six years, steadily. It's hard to pinpoint since I've been dabbling since college in the early 2000's.

How would you describe your style? My general rule is, the shorter the dress, the better. High-class (or is that "no class"?) hooker, basically. Though, I do enjoy a gown every now and then for a bit of elegance. Musically, I like pop/dancey music. I do a lot of British and European artists, because I feel their pop music more bouncy and "gay" than U.S. pop. I think American pop is a bit harder sounding and almost always includes a rapper for reasons that are not clear to me.

Favorite songs to perform: "I Wanna Dance with Somebody" by Whitney Houston (RIP); "Hush Hush; Hush Hush" by The Pussycat Dolls; "Turnin' Me On" by Keri Hilson; "Inescapable" by Jessica Mauboy; "Diamonds" by Rihanna; and most anything by Kylie Minogue, of course.

What has been your favorite drag experience? Being one of the cover girls of the August 2013 edition of Rochester Woman Magazine. It was the first time I've been asked to do something like that, and it was so fun. Plus, I enjoy performing in shows at colleges or fundraisers, like Trillium Health's White Party. It feels good that people would even think to ask me to perform at these events.

When/where do you usually perform in Rochester: Various Thursdays and Saturdays at Tilt Nightclub.

Website for more info: I can be found on Twitter, Facebook, and other social networks by searching "Kyla Minx." Also, check what's written on bathroom walls.

Inspiration for your drag name: My drag name was an obscure reference in an obscure 80's movie called "Times Square," starring Tim Curry. I was really into the movie at the time I started drag, and thought, "That name will do." I'm always amazed when someone knows the reference.

How would you describe your style? I would describe my style as classic Hollywood glamour, with a touch of Lux Punk. Flashy, trashy, but always a bit classy.

What has been your favorite drag experience? With a career as long as mine, there have been so many great moments involved with doing drag. Some of my highlights have been hosting Dare2Care, an anti-bullying organization, at Cleveland City Hall. I was able to work with some amazing leaders in the community and some truly amazing youth who will be the leaders of the future. I am most proud of the work Kasha Davis and I have done as The Big Wigs, bringing our show to mainstream audiences and being so embraced by them. Most recently I was excited about bringing my craft the next level by starring in "Me and Jezebel" at the Blackfriars Theater, playing the part of Bette Davis.

When/where do you usually perform in Rochester: I usually perform at 140 Alex every Friday night with Kasha Davis, Ambrosia Salad, and Darienne Lake. Our Big Wigs show can be seen at the Golden Ponds in Greece, as well as the JCC, and the Rochester Fringe Festival. My next big outing will be at Rain Lounge in Syracuse this month with Shangela, Alysa Edwards, Milk, and Michelle Visage, all from "RuPaul's Drag Race."

Inspiration for your drag name: One of my closest friends thought it would be sexy to have.

How many years have you been doing drag? Off and on for 13 years.

How would you describe your style? A mix of glamor and sex.

Favorite songs to perform: "Get Me Bodied" by Beyonce. It's the song that made me who I am as an entertainer today.

What has been your favorite drag experience? My favorite drag experience was a ball that was hosted by the Gay Alliance of the Genesee Valley when I was 16 and Naiomi Kayne (Carlos), the owner of Muthers, was doing a show there for the youth ball. She pulled me up on stage and I got a taste of the limelight and I lost it from there.

When/where do you usually perform in Rochester: I perform every Thursday and Saturday at Tilt Night Club & Ultra Lounge. Also I do guest spots at 140 Alex Bar and Grill.

Inspiration for your drag name: I took my name from the movie "Edward Scissorhands." One of my favorites, but the scene where a female is forcing a spoonful of the dish down Edward's throat made me think of drag. Some people love it, some people don't. Plus it's great being a food of the gods!

How many years have you been doing drag? It's kind of crazy, but I have been performing for 20 years now.

How would you describe your style? I would describe my style as campy drag. I enjoy the colored wigs, platform heels, KISS-like make-up, and glitter of course. I am a tall guy and don't think the female impersonator is me.

Favorite songs to perform: I enjoy classic disco, rock, and current pop. Gender doesn't bother me. It's just what makes me happy at time. I hope that if I am having fun with it, so is the audience.

What has been your favorite drag experience? Winning Miss Gay Rochester would be one. I also loved meeting David Cassidy at the world's largest disco in Buffalo. Who wasn't in love with Keith Partridge?

When/where do you usually perform in Rochester: I am currently performing Fridays at 140 Alex. 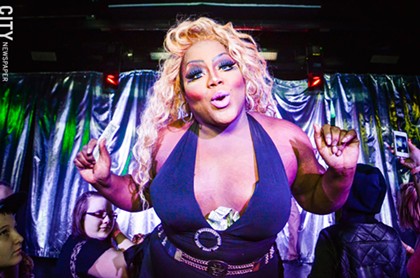 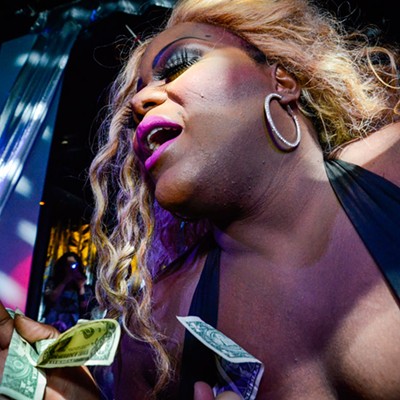 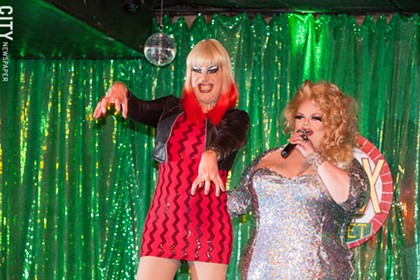 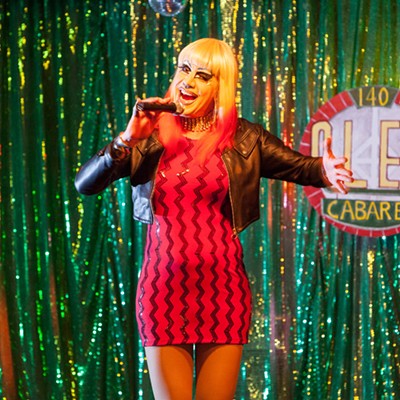