Sex ed for every body

Everything about Jenna Weintraub sparkles. Her glitter-filled horn-rimmed glasses, her magenta lipstick, and her Kelly green oversized earrings all twinkle and wink when they catch a bit of light. But the first sparkling thing I noticed about her was her personality, which lights up otherwise bleak comments sections on social media. Weintraub is a fat-positive, registered yoga instructor and sex educator with a passion for normalizing sex and body positivity.

We recently met up in a common area on the campus of St. John Fisher College, where she is the Coordinator of Wellness Education. There were students buzzing all around us, chatting, eating lunch, crossing through the building on tours. Weintraub had chosen a pair of comfortable couches and in the midst of the hustle and bustle, we talked a bit about sex. Or, more accurately, how normalizing the human body and all the things it does, including having sex, is a part of her everyday life. The following is an edited version of our conversation.

CITY: What does your work at Fisher entail?

Jenna Weintraub: I determine whatever wellness means to our students and create programming, support their success as a student, and make sure that they pay attention to what wellness means. I think my biggest goal is to expand their idea around what health and wellness are.

Outside of the day job I am a yoga teacher, a body image advocate — which kind of came around from yoga — and sex educator. I did that for nine years at Planned Parenthood. And once I left there to come here, I was like, oh, I'll just do this on the side!

What exactly does a sex educator do?

Meeting people where they are is a great way to start. Just kind of collecting information as to what sexual health means to them, what sexuality means to them. And some myth-busting. There's a lot of normalizing in the work that I do, and I like that a lot. I like removing the stigma if I can — busting stigma, talking about the taboos.

As a sex educator, and in all my different roles, there are so many topics: communication, understanding intimacy, and helping people understand what things kind of get their accelerators going, like, get them excited — and understanding what their brakes are. Things that dampen their sex drive. Then sometimes it's helping partners communicate about those two things.

Then there's also the middle school and high school kids that need their birth control information. There's so many good programs in Rochester. People that are doing that work like Highland Family Planning and Planned Parenthood; they're doing more than just birth control education. But the basic groundwork around what a healthy relationship is — that's important for our young folks to learn. Unfortunately, it's not happening. They're getting little bits and pieces of sex ed, but there's not a lot, there's not too much of a mandate. In New York state we're a little bit better off than other states. So that's a good thing. I feel like a lot of us sex educators are picking up the pieces where they're not learning.

What's a common myth that you find yourself busting?

The myth that I hear a lot is about desire and sex drive: that if you don't have that, there's something wrong with you. And then just normalizing that. What you see on TV or what you see on social media is not the reality for a lot of people. Sex drive is something that can be low, and desire can be low, but you still can be in a happy relationship. It doesn't mean your relationship is not great if you're not having sex.

Could you speak a little bit about the range of clients that you see?

Yeah, I've been working with a lot of people of size — people who identify as fat people — to help them access products that will help enhance their sex lives.

But also a lot of parents reach out looking for support. Maybe they found their kid doing something, or there's something coming up, like prom, that they're concerned about and they want to know how to talk to their kid. There's a lot of gender stuff, trying to figure out or kind of play around with gender, and that makes parents pretty nervous.

I really love working with group homes and people with disabilities. Some places prefer not to provide a lot of information so that people aren't sexual beings, but then that's when they get behavior issues. A lot of it is just figuring out if people are just stressed out, or if they're anxious, or maybe they haven't figured out how to pleasure themselves. And folks in a lot of the group homes are getting better at understanding that that's a human rights issue, too.

So you serve a range of bodies, a range of ages, and range of genders in the work that you do. How did you come to this work in the first place?

I feel like I've always been the person who was there to answer questions for friends. I was going to go to college for broadcasting communications. But then I took a sociology class — and that will change you. And I loved it. I really wanted to know more about people rather than just broadcast communications. So I ended up being a gender studies major. When I found out it was an option that was like, "Woah!" Even when I found out that there are more than two genders, I was just like, "Wow!" And that just really made it hard not to take more classes and learn more about it.

I think it probably starts out selfishly because you want to understand why you're the way you are, and why the world is the way it is. And then you end up taking classes and it really expands your minds and your idea of the human experience.

I always had dreams of becoming Doctor Sexologist Jenna Weintraub. But sometimes I see people going to programs like that, and they're kind of struggling making it on their own unless they have their own practice. And I don't know if I'm a have-my-own-practice type of gal. So it's been neat to expand a lot of those specific skills into overall wellness. Because I feel like a lot of my work officially comes from shame-free education. 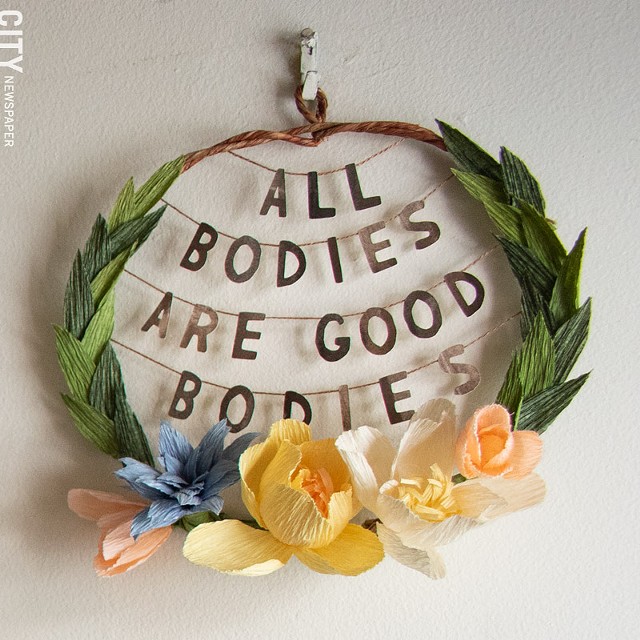 What's a piece of advice that you would offer for the general community who is looking to have a better understanding of their personal life and personal relationships?

I think this is where yoga has helped me a ton. To accept my body and accept how I am as a person is understanding that feelings are sensations in the body. Being able to name those sensations can be super helpful in managing your feelings and understanding your own needs. Understanding that sometimes our mind is just wrapped with feelings all day, 24-7. That's how I am — I just have feelings, lots of feelings! I've been doing a lot of work on trying to translate what triggers my feelings. Basically, if you allow yourself to have any emotion, even if they're bad emotions, you can get through life pretty well.

What's one question that people ask you that they have a lot of trepidation about, but shouldn't?

I interact with a lot of older women because I also run a social Facebook page for people in body positive spaces. And I've had a handful of women who are in their 60s, who are like, "You're so lucky to have figured this out." I just turned 37. And to me, that makes me feel they're pretty nervous to admit that they've struggled with their body image or hated their body for so long. And so to see younger people embracing their bodies, no matter what they are or look like is confusing to a lot of folks. But also like, "Wow, that would have been really nice to learn a long time ago." That's one thing people reach out to me about.

Usually, it's HPV or questions about abortion. I know a lot of stuff about abortion. And a lot of people know that, so I'll get the text or Facebook message. I'm an abortion doula. So that's how I get a lot of the background.

Wait, what is this?

It's kind of like what a birth doula would do. While someone was preparing for pregnancy, during pregnancy, during that whole birth thing, and then after pregnancy. An abortion doula can help prepare someone, can help talk through some of their options. If they have any questions, inform them of what it's going to be like at the clinic. Sometimes the clinic allows someone to come with them; an abortion doula could be with them. And then for aftercare too. If they have any questions about how much they're bleeding or is it normal to feel this way? Abortion doulas can really support someone through the whole decision-making process and then the emotional support that they need throughout the process.

I got a lot of my training at Planned Parenthood, but then I helped establish a talk line for people to talk about abortion with a bunch of other great people.

And what's that? What's that hotline?

Connect & Breathe is an after-abortion talk line. It's a local nonprofit actually. The hotline is a great resource for people to use if they don't want to go see a person or if they never told anyone. That's really what causes a lot of distress for folks around anything — just keeping a secret, when they can't talk about what happened to them because they can't trust anyone around them.

Jenna Weintraub can be found teaching yoga on Thursdays at Yoga Vibe, or you can check out her website at jennaweintraub.com.

Amanda Chestnut is freelancer for CITY. Feedback on this article can be directed to becca@rochester-citynews.com.