Seven new-ish restaurants to check out this fall 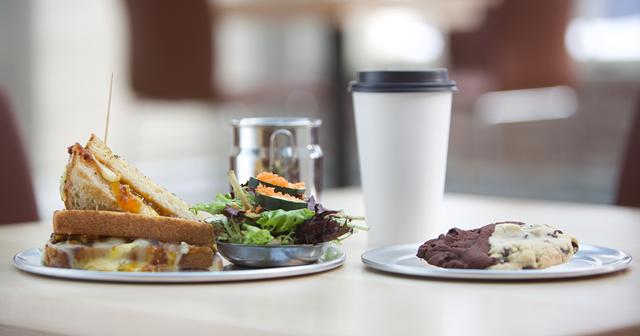 You could be forgiven for missing some of the changes to Rochester’s food scene over the last year. But if that’s the case, you’ve got some catching up to do this fall.

There are new spots, familiar places that got a facelift, and others that emerged from their pandemic-induced shutdowns reimagined. Check back with CITY through the fall for full reviews of some of them.

In the meantime, here’s a taste. 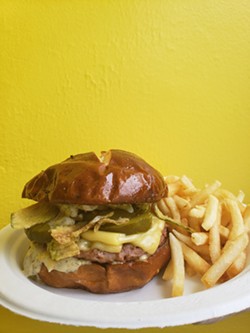 Last year was tough for everyone in the restaurant business, but it was a kick in the teeth for Jenny Johnson and her vegan treats shop Misfit Doughnuts. The shop had barely moved into its new location on Gregory Street, after a fire had forced it out of its old spot on Monroe Avenue, when it had to shut down.

But closing gave Johnson time to think and innovate. She renamed the place Misfit Treats and Eats and expanded the menu to offer new savory items like the McLovin breakfast sandwich, the Nashville Hot “Chicken” sandwich, and weekly specials based on meatless bases from local vegan “butcher” Grass Fed and national makers of processed meat substitutes.

The Dilly Burger — a Beyond Burger patty with Chao vegan cheese, white dill sauce, dill pickles, and fried cucumbers — is delicious and satisfying without leaving you with that heavy feeling you can get from meat. Wash it down with a peach lemonade made with homemade peach syrup and you’ll be smiling.

There’s always something new on the weekly specials, and Johnson says this fall she’s serving a Misfit Maven Plate — a vegan version of Rochester’s infamous cuisine — and a vegan Cubano sandwich. And, yeah, you can still get doughnuts, pies, and other sweets. 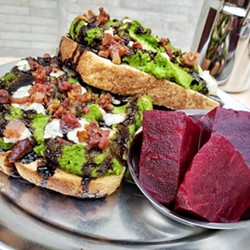 Long before fancy variations of avocado toast became a thing with millennials, Open Face was serving up all manners of vegetable and fruit smashes on toasted bread from its digs in the South Wedge.

The menu is familiar. True to its name, Open Face specializes in open-faced sandwiches, with toppings that range from the glazed Corn Mash and the Toasted Brie with apricot preserves, tart cherry butter, and poppy seeds to a Maple Turkey Open Melt topped with Havarti and French fried onions. Ginger carrots and pickled beets are among the favorite sides.

Open Face also sells some of its mashes by the pint and quart with 24-hours’ notice and its rotation of soups, like the creamy, nacho cheese-based chicken enchilada, will be comforting when the weather turns. 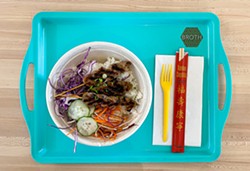 You can choose and booze your own adventure at the food court-like Mercantile on Main, which opened in the Sibley Building earlier this year, and houses five different kitchens, a café, and a bar. Open and airy, the Merc’s bright environment makes it a cheerful spot for a solo bite, a work lunch, or happy hour.

There is something for everyone, whatever your mood.

Flour Kitchen offers an array of Italian pasta dishes, including rigatoni bolognese or sausage and rapini orecchiette, as well as meatball subs and salads.

Cut follows the fast-casual model in which you build your own bowl of starches, veggies, and your choice of protein (beef, chicken, pork, shrimp, trout, or falafel), and has a fish fry.

Broth has a build-your-own pho menu, with protein that ranges from vegan to surf or turf, a variety of fresh spring rolls, and tasty lemongrass chicken skewers.

Each eatery has standard or specialty sodas, juices, and teas, but if you’re looking for something stronger, the Merc’s center island houses the coffeeshop Rococo (drip, espresso, and sweet treats) and the Rufus Cocktail Lounge (from the same folks behind The Cub Room).

Protips: The Merc is cash-free, but you can buy gift cards at a little console on site to use at any of the businesses. Want to order ahead and pick up? Download the Toast app, which is updated daily with the eateries’ specials.

The traditional puck-shaped patties of fried ground-chickpea-and-spice come in four variations — classic, spicy with onion and sumac relish, sesame-encrusted, or stuffed with mozzarella cheese. It’s made-to-order here and an order includes five pieces. But if you can’t choose one style, the sampler includes four pieces of each.

Master Falafel is owned by Khaled Alkaissi, 24, a refugee from Syria, who has a decade of experience working in restaurants in Jordan and the United States. He runs the shop with his brother Yamen, sister Rama, and brother-in-law Hiwa Shareef.

Also on the menu are pitas and plates — choose from rice and salad or vegetable-based, topped with your choice of falafel, chicken, or gyro meat. One plate has a base of uniquely-accented Mediterranean sides including baba ghanouj with pomegranate molasses, tabbouleh, hummus, and stuffed grape leaves. Another, the Rochester Plate, comes with Syrian-spiced fries, cabbage, tomatoes, scallions, jalapeños, and your choice of protein and sauce (garlic, tahini, or tzatziki).

For dessert, there’s baklava or rice pudding with coconut. 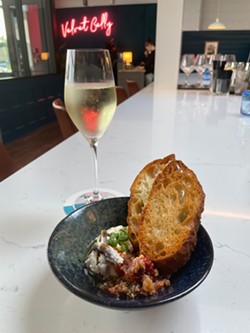 Velvet Belly, the newest addition to the Rochester Public Market’s ever-expanding fare, opened in June and has some of the most decadent food in town. It’s co-owned by Josh Miles (The Revelry), Chelsea Felton (The Revelry, Branca Midtown, Bitter Honey, Nocino), and head chef and partner Jeremy Nucelli, and specializes in seafood, craft cocktails, and impressing your date.

Velvet Belly offers a wide variety of fish dishes (crustacean, shellfish, mollusks, and the finned kind). But if you’re more in the mood for a steak, burger, or a strictly-vegetable dish, they’ve got you covered there, too.

You can’t go wrong with the house-made ricotta with roasted cherry tomatoes and marinated anchovies to spread over crostini. The tender and silken wagyu beef carpaccio topped with stracciatella, smoked soy-cured egg yolk bottarga, parmesan and crisped artichoke bracts was also a treat.

Roasted monkfish medallions — a flaky, meaty fish all buttery and citrus-tart with its wild chanterelles and lemon-caper-parsley salad — and the smoked gouda and cauliflower gratin, a to-die-for, creamy comfort dish with a crust of crunchy breadcrumbs, were fantastic.

Velvet Belly is currently open for dinner and drinks, with a lunch menu coming soon.

Le Petit Poutine, one of Rochester’s best food trucks, announced in June that it would be opening a brick-and-mortar restaurant in the fall.

The owners tell us they don’t have a name for their place yet, but we think they’d be foolish to stray too far from the name that made them Rochester famous.
The launch date for the restaurant is up in the air, too, but the address is fixed — a space on Elton Street in the Neighborhood of the Arts that was previously occupied by Glen Edith Coffee Roasters.

“We don’t want it to be a completely fast-casual experience,” co-owner Ronnie McClive says. “We’re calling it ‘fast-classy.’ Poutine on the truck is poutine on the go; here we want people to take it slow. It won’t be upscale exactly, but would make a good date night.”

The menu hasn’t dropped yet, but judging by Le Petit Poutine’s inventiveness from its kitchen on four wheels, we’re expecting good things. In the meantime, the food truck is still on the road and the owners say it will stay that way for the foreseeable future.

A casual-fine dining spot and craft cocktail bar that boasts a menu of delicious-looking items inspired by global cuisine, Brick & Ivy is a must-stop on the fall restaurant circuit.

Sweets include a churro tower stacked like Jenga tiles, glistening in sugar, and drizzled with chocolate. The bar’s temptations include the Gold Rush (vodka, gold kiwi, prosecco), the Lady in Pearls (Cognac, Strawberry Demerara, lemon, strawberry pearls — think bubble tea), the Razzle Bazzle (gin, basil, raspberries, lemon), a small selection of beers and ciders, and a variety of French, Italian, and Spanish wines.

Rebecca Rafferty is CITY's life editor. Do you have a food and dining tip? Email me: becca@rochester-citynews.com.