Three stories of local music made in quarantine

September 14, 2020
Capturing a creative spark can be elusive for artists in normal times. Under the forced isolation brought on by COVID-19, it can be like scrambling for embers buried in sand.

Some local musicians found the extended time in quarantine to be a creative boon, particularly during the first few months of the pandemic. For them, the quarantine was not only a time for writing and recording new material, it was a pivotal shift in their careers, a much-needed return to productive habits, and a time for fresh collaboration. Here are a few of their stories:

Soprano Sally Drutman was nearing the end of her first year as a master’s student at Eastman School of Music, pursuing a degree in vocal performance, when the coronavirus struck. She started taking her classes online, and soon after, began to question whether she wanted to continue pursuing a life as a professional opera singer — a career she had been chasing for a decade. 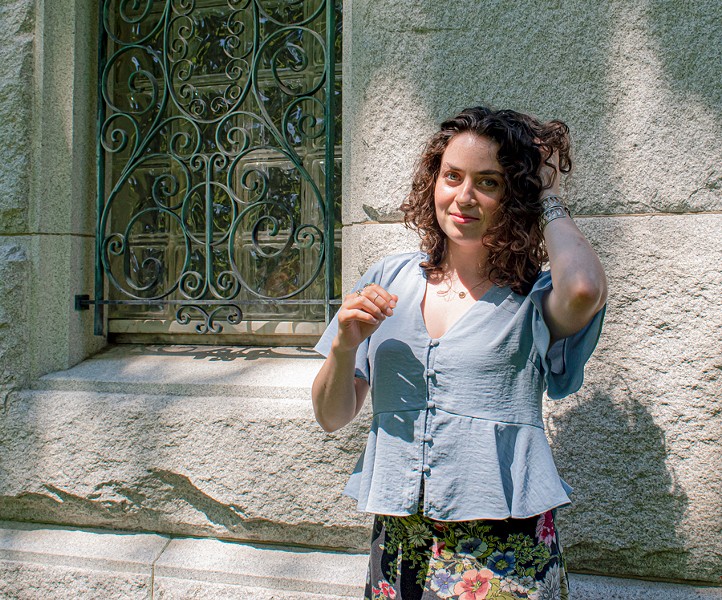 Drutman realized she was unhappy. She was faced with cancelled and postponed opera gigs, in an industry in which meeting the demanding expectations of opera company officials, agents, and other professional insiders is all-important. She was tired of trying to please others.

Traveling frequently — including moves to Salt Lake City, Berlin, and now Rochester, to study and gain experience — meant less time to spend with family and friends, all for what Drutman saw as baby steps of career advancement.

“I was finally faced with this internal dilemma,” she says. “Do you keep going at this, feeling frustrated and at this point, feeling like a slave to the art form? Or do you figure out some other way to have a different, healthier relationship with music, which is my life and something I would never want to lose?”

Drutman had written songs sporadically in college, and would sometimes hum musical ideas into her phone, but never brought those ideas to fruition because of her focus on opera.

With the arrival of COVID-19, she had a revelation.

Drutman says she gets restless at the idea of being inactive; perhaps not surprising for someone who has performed across the United States and in nine different countries. She says that being stuck at home unexpectedly motivated her to use songwriting to cope.

Within the first six weeks of the pandemic, Drutman wrote and completed more than 20 songs.

Drutman released her first single, “Milky Blue,” on July 1, under the moniker Sally Louise. With only her voice and a classical guitar borrowed from her boyfriend, she dug into the software program GarageBand. The result is a breezy, textured composition featuring a ready-made gamelan sample and found nature sounds she had recorded while living in Utah (on Antelope Island, near Salt Lake City), Germany (in Berlin), and now in Rochester (along the Genesee River).

“I just wanted to create this musical fog of dreamy, ethereal kind of sounds,” she says. That fog begins to clear two-thirds into the song, when hazy textures give way to bird calls and the clarity of open sonic space. Wordless vocalizations, previously sung on an “ooh” vowel, shift to the more open “ahh” vowel, suggesting feelings of relief and contentment.

Drutman says “Milky Blue” articulates her realization that “I had been trying to people-please when I really wasn’t listening to that inner voice.”

Her next single, “Bodily Exile” — to be released digitally via streaming platforms on September 12 — bears a similar message of reconnecting with one’s authentic self and the freedom that it brings. “Call me renewed, call it desire/ Fetch me myself, I’ll start a fire,” she sings with easygoing confidence over an R&B groove and a simple four-chord progression.

Drutman has decided to not return to Eastman to complete her master’s degree, though she will be staying in Rochester for the foreseeable future. She plans to release a full-length album by summer 2021.

And although opera is still an influence — along with Bob Dylan, Joni Mitchell, folk, R&B, and jazz — she won’t be pursuing it full-time as she once did.

“It’s just not as important in my life,” Drutman says. “And I realize it’s not who I am right now.”

Luke Cornwell and his song-a-day streak

The creative impulse can be a hard thing to corral during a pandemic. And maintaining the will to be productive can be even more difficult.

That’s what makes multi-instrumentalist Luke Cornwell’s latest album, the 30-track “Sweaters in Coffee,” particularly impressive. Though he serves as bassist in Seth Faergolzia’s mercurial band Multibird, and as keyboardist in the sci-fi rock band Treasure Plate, his new solo music was the direct result of his ambitious project to write and record one song each day for the entire month of April.

Cornwell says it’s more accurate to call the pursuit “obsessive.” But it’s not the first time he’s attempted such a rigorous creative schedule. In July 2012, the summer after Cornwell completed high school, he used a TASCAM four-track recorder to produce the album “July,” using his own performances on piano, guitar, bass guitar, and saxophone.

In 2020, faced with quarantine, he decided to duplicate the process — this time with additional instrumentation, including ukulele, the mandocello (or baritone mandolin), and synthesizers, as well as digitally altered field recordings.

In creating 30 disparate songs and instrumentals, Cornwell says he had a single mindset: “I just exist here now — in this room, in this house, on this street.”

“Sweaters in Coffee” is a delightfully quirky collection of bedroom recordings — intentionally raw, sometimes nonsensical, and often self-reflective. The songwriter admits that the balance between high and low frequencies isn’t always consistent; the vocals are sometimes farther back in the mix than is ideal, and the intonation is sometimes slightly off.

“The reason it works for me is because these songs don’t have a history of being played or toured or anything,” Cornwell says. “They were generated and then they were recorded.”

Cornwell says that creating “Sweaters in Coffee” helped him progress as a songwriter. The project left him no time to second-guess himself and he avoided the writer's block that plagued him in the past.

Most of the songs were recorded on the same day they were written. After the original sessions in April, he went back to re-record individual parts or create overdubs on about one-third of the tracks, in order to give the music more longevity.

Musically, the listener can hear the inventive, melodically restless freak-folk influence of Faergolzia. This is perhaps most prominent on the opening song “Bagel Duffy,” about a hungry and opportunistic mouse, and on “This Is Fine,” which is about receiving a smoothie in the mail. But the eccentricity can also be heard on “One Day,” an odd but touching a cappella song that sounds like a contemporary Irish folk tune.

Lyrically, Cornwell can be light-hearted and silly, but there are plenty of wistful and bittersweet moments as well: in the pop-rock hook of “You Have Grown in Me, the reverb-laden “Go Home,” and perhaps most notably, on “We’ll Be Back.”

On the latter song — maybe the most beautifully written of the “Sweaters in Coffee” set — it seems Cornwell is injecting optimism into his disaffected world. Everyday things on which he could rely pre-coronavirus — “free student parking, insurance, vitamins” — are no longer as readily available. Under this interpretation, “We’ll Be Back” is the promise of a return to normalcy.

When writing the instrumental tracks, Cornwell sometimes left things to chance, constructing melodies at random using a die — with each individual note associated with different numbers on the die. He’d determine the number of notes needed to complete a given musical phrase, roll the die, and arrange those notes as he saw fit.

There are also atmospheric compositions that demonstrate his love for more abstract textures. Cornwell says that at times, he values the timbre of the music over harmonic consonance, preferring the creation of sounds to the crafting of songs. That is evident in compositions such as “Granules.”

But that song is immediately followed by “Above Us All,” an ardent, ukulele-driven ballad, and the album’s closing track. Cornwell has an appreciation for both straightforward, folk-inspired songwriting and avant-garde composition.

Prior to COVID-19, Alex Northrup and Sam Hirsh — who have been dating for over a year — had never had a real creative collaboration.

They had their separate musical projects, and they contributed to each other’s solo albums, with Hirsh providing guitar work for Northrup’s newly released “Popular Songs That Will Live Forever,” and Northrup adding keys to Hirsh’s forthcoming album “Secret Islands.”

But they had never truly collaborated.

Then circumstances changed, and the instrumental dream-pop duo now known as Luxury Robe, along with its subsequent debut album “Murmurs,” was born.

Hirsh had been working as bartender and splitting time between Rochester and Syracuse. When he lost his job as a result of the pandemic, he moved in with Northrup, whose day job is in CAD drafting.

“Murmurs” is “almost like a honeymoon record,” Hirsh replies when asked if the musical partnership on the album mirrors their personal partnership.

The instrument duties are divided evenly, with Hirsh creating the guitar riffs and drum programming, and Northrup playing the bass guitar and most of the keyboard instruments — including the Farfisa organ.

The music on “Murmurs,” though slightly psychedelic, owes much of its synth-soaked ambiance and pop guitar licks to the '80s. That guitar work is at the core of the album’s overall sound.

Hirsh achieved the specific guitar tone for the album with a Digitech Whammy pedal, set to harmonize with his playing in fifths, along with the use of a flanger effect and multiple delay pedals, all of which contribute to what the guitarist refers to as the “wash.”

He points to The Police, Cocteau Twins, The Cure, and The Smiths as influences.

Perhaps unsurprisingly, in between writing original tunes, Hirsh and Northrup would play covers of The Smiths' songs. Hirsh saw playing the covers as a way to further develop his chops. For Northrup, it was a diversion during a difficult period of quarantine.

“We were happy that we were together, and now living together, but it wasn’t exactly the happiest time in the world,” he says. “And even though we’re stuck in the house, there’s really no escaping what’s going on. It’s still coming in, in your social media and what you’re watching on TV. It can make you bummed out for sure.”

Though the music isn’t peppy, it isn’t overly dark, either. The feelings invoked tend to be contemplative and ambiguous. Northrup attributes this to the absence of lyrics, which could otherwise influence the emotional response of the listener.

In lieu of voices, the Farfisa organ takes on the role of the melody much of the time, similar to the way guitar was so central in early rock ‘n’ roll instrumentals such as “Sleep Walk.”

“I tried to create those melodies in such a way that they were like vocal melodies,” Northrup says. “You should be able to sing 'em.”

When asked if Luxury Robe is a project that might see the light of day as a live act, Northrup doesn’t rule it out.

“I do miss playing in a room with a group of people, but I also equally enjoy having the track, sitting in a room by myself, and coming up with the part,” he says. “It’s just a different form of collaboration.”