First, it was the snow leopard. Abandoned by his mother after being born outside her maternity den, he died at just eight days old.

Then, a red panda suddenly succumbed to a respiratory infection. A spotted hyena, thought to be the oldest in human care, died next. Before long, an African elephant was put down after a chronic foot condition rendered her lame.

A string of deaths of crowd-pleasing animals at the Seneca Park Zoo in the last six months has patrons and casual visitors alike wondering why so many animals have been lost. 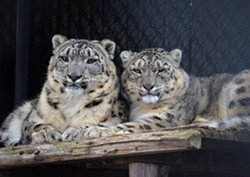 The more suspicious among them question the quality of care being given to the animals. But most, it seems, are simply asking whether the deaths could have been avoided or whether there is something in the water.

A year ago, for instance, an ostrich died when she was attacked by a southern white rhino named Bill living in the same habitat. Three years ago, the zoo lost three sea lions in the span of four months.

Larry Staub, director of Monroe County Parks and the zoo, acknowledged such questions are natural.

"We hear that as well, and I've heard that," Staub said. "But it is pretty easily explained. Every death here at the zoo has, obviously, a cause, and none of them are welfare related."

A likely answer from the head of a zoo under scrutiny, perhaps. But the best evidence available suggests that animal welfare at the zoo is, for the most part, beyond reproach.

The evidence is the zoo's accreditation report, a 38-page document authored by the primary accrediting organization in the country, the Association of Zoos and Aquariums, which sets standards for animal care, conservation, education, and scientific research.

Member institutions, of which the Seneca Park Zoo is one of 239, are required to undergo accreditation every five years — an exhaustive process that can take six months to a year to complete and requires a multi-day inspection by a team of inspectors.

Seneca Park Zoo received its most recent accreditation in 2018, the second year in which the AZA applied new and more stringent animal welfare standards to its accreditation process.

The accompanying report for Seneca Park Zoo, which was obtained from the county under the state's Freedom of Information law, showed that the zoo's animal care exceeded standards.

"The zoo has developed a comprehensive animal welfare program that meets and exceeds new accreditation standards," the report read. "The program focuses on providing the animals complete choice and control in their environment and routine welfare assessments."

Inspectors, in fact, singled out the zoo's elephant program as "impressive and clearly focused on safety, excellence in animal training, and welfare."

The assessment covers 328 questions, including 100 between two categories of "Animal Welfare, Care, and Management" (68 questions) and "Veterinary Care" (32 questions). Zoos can answer each question three ways — "yes," "no," and "not applicable" - to which AZA inspectors rank the responses "acceptable," "questionable," and "unacceptable."

Inspectors found "unacceptable" the habitats for the red pandas, snow leopards, and sea lions, contending they did not provide enough shade for the animals.

Seneca Park Zoo responded by erecting a shelter in the red panda exhibit, and conducted studies in the other habitats that demonstrated there was adequate shade.

Inspectors labeled "questionable" the assertion by the zoo that all of its animals were presented in manners that reflect modern zoological practices. They found that the exhibits for the hyena, raccoons, red-tailed hawk, and snowy owl were inadequate.

"We agreed with that," Staub said. "It's being corrected as we move forward as an institution."

He explained that many of the animals in the exhibits cited were old and that modifying their habitats so late in life could be detrimental to them. He said the snowy owl's habitat was being upgraded and that the others would be phased out as the animals that occupy them die.

The hyena, named Lou, has since died. The raccoons, Buffy and Willow, are both 12 years old and thought to be the oldest in North America.

Seneca Park Zoo is judicious about which animal deaths it announces, reserving publicity mostly for those animals with whom visitors have made a connection.

"When an animal dies here, the collection of zoos, the AZA, looks at it and sees the cause of death. So we're being judged on that, too," said Dr. Louis DiVincenti, the zoo's director of animal health and conservation. "There's never been a, 'Wow! That's not okay,' reaction from them."

Indeed, when the three sea lions died in 2016, the zoo's director at the time asked the AZA and the federal Department of Agriculture, which licenses animal exhibits, to review the sea lion program.

"I can tell you that the AZA Accreditation Commission has full confidence in the professionals working at Seneca Park Zoo, and believe they are providing the best care possible for every animal there, young and old," AZA spokesperson Rob Vernon said.

There is no "normal" when it comes to zoo mortality rates, according to zoologists. Each zoo has animals with unique needs. Some zoos, like Seneca Park, have a larger proportion of older animals, most of which were transferred here by zoos looking to introduce breeding programs with younger, more fertile animals.

"People say, 'Why do you have so many old animals?'" Staub said. "It's because they're so well cared for and living into old ages. If you didn't have old animals and deaths at your zoo, something would be wrong."