PHOTO BY MAX SCHULTE Zach Sarkis of Growing Family Farm inspecting the last bits of bud remaining on this year's hemp crop.
The unmistakable aroma of cannabis is in the air long before the rows upon rows of deteriorating hemp plants at a small farm in Spencerport that are its source come into view. Once lush and vibrant green and stretching for acres, the stalks have begun to brown and shrivel under the cool autumn sky.

They have already been picked over for their most precious resource — their buds rich in cannabidiol, commonly called CBD, the extract that is being added to everything nowadays from hand cream to sparkling water to toothpicks — and will soon be turned to compost.

“I touched every single one of these plants at least a half a dozen times before we even started harvesting,” Zach Sarkis, a partner in the farm and a founder of NY HempLab, a nonprofit incubator for the state’s fledgling cannabis industry, said on a stroll through the stalks. “There’s such intimate care.” 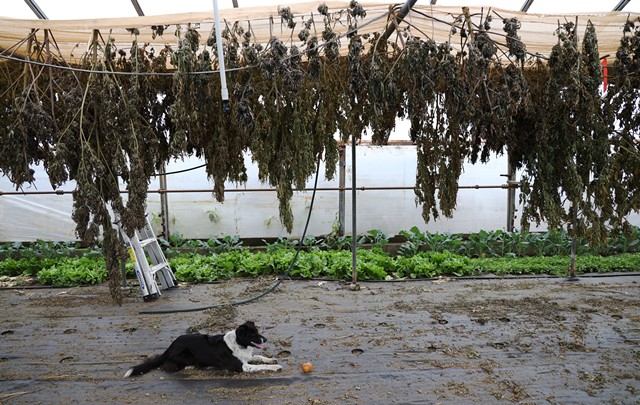 This crop of hemp may be the last to be cultivated on the farm and at other small hemp farms like it. That’s because newly proposed rules to regulate the production and sale of CBD hemp products in New York announced in October by Gov. Andrew Cuomo would ban the sale of hemp buds — also known as the flower — which is the most profitable part of the plant.

Right now, hemp farmers are free to pick off buds and package them for smoke shops, where consumers can buy them, roll them into joints or pack them into bongs, and smoke them. For small farmers, that’s where the money is. Despite the infusion of CBD into a multitude of products, smoking the bud remains the most efficient and cost-effective way to consume CBD.

But under the new regulations, farmers would no longer be allowed to sell their buds for resale as a smokable product. Rather, they would have to sell their plants in their entirety to a person licensed to crush them down into an oil extract.
The trouble with that scenario for hemp farmers is that the whole plant, when sold for processing, has a fraction of the value of that of the buds when they are sold as a standalone, smokable product.

The proposed regulations have been widely considered a precursor to what Cuomo has suggested will be a push by the Democratic-controlled Legislature in 2021 to finally legalize the recreational use of marijuana, both as a means of New York stemming a budget deficit and getting with the times as more and more states take the plunge.

Many in the state’s cannabis industry are applauding the proposed regulations as a way to help hemp farmers and processors meet the growing demand for their products. But they also contend the provision that bans bud sales is counterintuitive for a recreational cannabis market on the cusp of legalization, and they are using the window of time they have before the proposed regulations become permanent to push back.

The New York Cannabis Growers & Processors Association, for instance, has called the proposed regulations “an important step for New York state as it becomes a global leader in the hemp extract market” and a potential death knell to small hemp farmers.

“If not removed from the proposed rules, it may essentially push the small and craft farms out of the industry,” the association’s executive director, Nicole Ricci, has said.

Sarkis said if the ban becomes law, he would be better off planting tomatoes and greens.

“It’ll cripple the craft industry. As of right now, one in 10 farms actually succeeds,” Sarkis said. “Me, I’m a partner on this, I’ve been working six days a week since March without a paycheck. Did you just nullify everything I just did?”

A SQAURE'S GUIDE TO THE LEGISLATION

The uninitiated can be forgiven for being confused by terms like “hemp,” “bud,” and “cannabis.” The cannabis industry is in flux and complex. Consider that the same plant (cannabis) is considered legal in New York if bred one way (hemp), and illegal if bred another (marijuana).

There is a misconception that hemp and what many people know as marijuana are different species of cannabis. They are not. What separates them is their content of tetrahydrocannabinol, or THC, the active ingredient in pot that gives users a “high.” Cannabis with a concentration of 0.3 percent or less of THC is hemp.

CBD can be extracted from hemp buds, or flower, and turned into oils, teas, and breath sprays. But, like the flower of its cannabis cousin, the marijuana plant, hemp flower can also be smoked, and therein lies the rub with the bud for the Cuomo administration.

The proposed regulations, dubbed the Cannabinoid Hemp Program, aim to set standards in the CBD industry that regulate quality control, licensing, and what products can and cannot be sold.

CBD is found in all cannabis plants and is widely used for a bounty of reasons, such as treating headaches, anxiety, depression, and chronic pain. The 2018 Farm Bill legalized hemp under federal law, but it preserved the authority of states and Native American tribes to regulate the production of hemp.

The proposed regulations in New York would greenlight the sale of products like CBD-infused tinctures, edibles, ointments, and vaporizers — items that are already on supermarket shelves under federal law — and ban the sale of hemp buds, which are commonly sold in packages in smoke shops and gas stations.

Many farmers sell bud directly to customers and had hoped the new regulations would allow them to expand their business. Smoking the bud is by far the most popular, and cheapest, way to consume CBD — just as it is to consume marijuana. 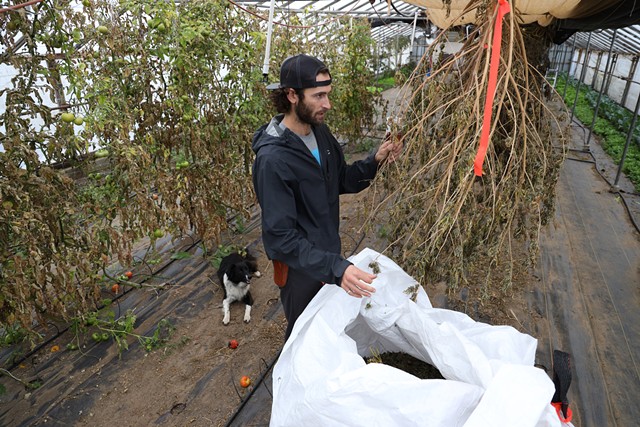 “I think if this law stays, you’re going to see a lot of people exit the industry,” said Steve Van de Walle, who owns Tiva CBD and runs a small hemp farm in Mt. Morris in Livingston County. “Any time you add more layers of regulation it scares people out of the industry.”

Consider the potential lost revenue to the small hemp farmer if the proposed regulations stick and farmers are restricted to selling the whole plant instead of harvesting the buds for sale.

Small batch hemp flower sold at retail can easily fetch $1,000 per pound. At wholesale, as in sold to a person who is going to turn it into extract, the average value was about $160 per pound earlier this year, according to Kush.com, a cannabis industry advocacy and retail site.

“Every row of plants will pull in value over the course of a season,” Sarkis said. “It’s just not worth putting in eight months of time in order to get a fraction of what it’s worth.” 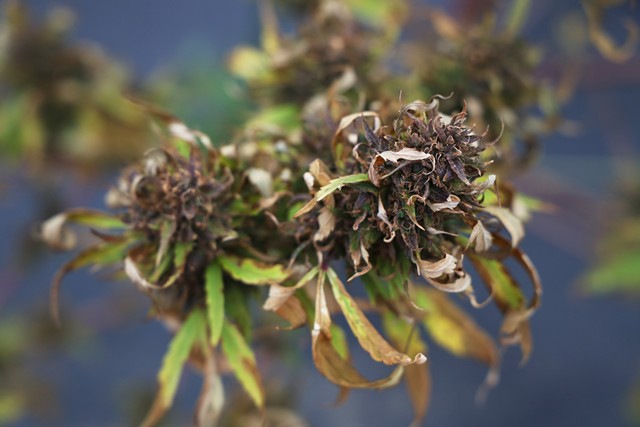 Jill Montag, a spokesperson for the state Department of Health, said concerns about smoking fueled the bud ban, much like it did the state prohibition on flavored e-cigarette products imposed earlier in the year.

“In line with the Department of Health’s efforts to reduce tobacco and smoking consumption for all New Yorkers, the proposed cannabinoid hemp regulations prohibit the sale of hemp flower by licensed cannabinoid hemp retailers to discourage the use of this product form due to the negative health effects associated with combustible products,” Montag said.

Industry advocates see the position as being at odds with the future of the cannabis industry in New York. Last month, Cuomo told North Country Public Radio that legalizing cannabis could help shore up the state’s budget deficit.

“I think this year it is ripe because the state is going to be desperate for funding. Even with Biden, even with the stimulus, we’re still going to need funding,” Cuomo said. "I think we’re going to get there this year."

Will the state extend the bud ban to marijuana plants when recreational cannabis becomes legal? If that were the case, New York stands to leave hundreds of millions of dollars in taxable revenue on the table. Buds are the biggest part of the marijuana market, according to Grand View Market Research, which valued the market at $9.1 billion last year.

“They will not do that, and they didn’t ban cigarettes,” said Mary Kruger, president of the local chapter of the National Organization for the Reform of Marijuana Laws (NORML). “I do not support cigarettes, they kill hundreds of thousands of people every year, but they didn’t ban them, so why are they banning flower?”

While hemp regulations and recreational marijuana are two separate things, neither exists in a vacuum. Jason Klimek, an attorney who heads the cannabis law practice at Boylan Code, said the regulations are effectively laying the groundwork for New York’s recreational cannabis policy.

“Think about the timing on the recreational side, Cuomo’s been pushing it hard that we’re going to get it into the budget this year,” Klimek said. “When you read these regulations, you can almost take out ‘hemp’ and put in ‘recreational cannabis’ and they almost completely work.”

THE FUTURE OF SMALL FARMS

The public comment period for the new hemp regulations is open until Jan. 11, but growers believe stopping the ban is an uphill battle. If the ban sticks, they say, the hemp industry will simply revert buds to the black market.

Klimek said the regulations are effectively framing who can participate in the cannabis industry, at least in the near future. Priority, he said, is clearly being given to CBD processing licensees, of which there are only a handful.

“Try to find an application for a CBD processor license,” Klimek said. “They don’t exist, I went onto the Department of Health website, I couldn’t find them, and it’s not regulated under the Department of (Agriculture and Markets) anymore.
Effectively what they’re saying is, ‘We’re going to go with the processors we already have.’”

For the consumer, bud is typically the most affordable CBD product, with a gram, enough for a hearty joint, usually running less than $10. Compare that with small bottles of tinctures that can run from $30 into the hundreds of dollars, depending on concentration.

“They discriminate against flower in all of their legislation, and they always compare it to tobacco,” Kruger said. “New York state does not have research that shows marijuana smoke is the same smoke that causes cancer. It does not exist.”

To Kruger’s point, the American Cancer Society points to several studies which demonstrate CBD smoking can work as an effective tool to control nausea and support pain management in cancer patients.

As Sarkis wound down his labor in the field, moving moldy stalks off the drying racks and pulling posts out of the ground, he looked to the future with uncertainty.

He worried about the industry and how cannabis will be regulated in months and years to come. Mostly, though, he feared his dream of living off growing cannabis may be on the verge of going up in smoke.

“The farm put 25, 30 grand into this, not including time and labor,” Sarkis said. “And now, are we criminals?”