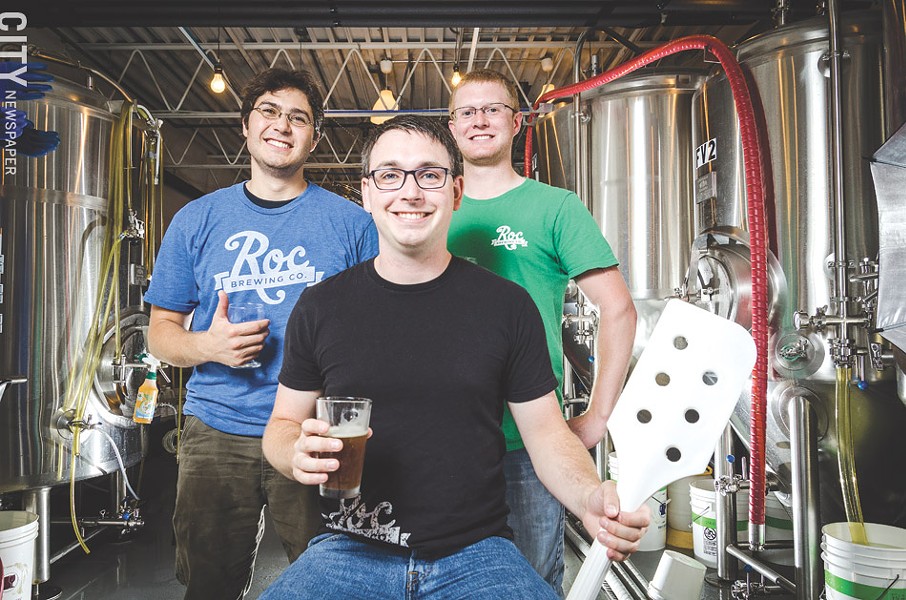 Local breweries are preparing for fall. Here's what to watch out for.

When that time of year approaches where the leaves start to turn and there is a slight crispness in the air, there is one thing we can all look forward to, and it's not the pumpkin spice latte. I'm talking about fall seasonal beer season, and it's almost upon us. Will there be Oktoberfests? Yes. Will there be pumpkin? Yes; yes, there will. City talked with a few local breweries to find out what we can look forward to in the coming months in terms of seasonal beers.

Lost Borough Brewing Co. (543 Atlantic Avenue) has only been open since November 2014 but the crew has already brewed 32 different beers. Built with the help of a Kickstarter fundraising campaign, the brewery has been carving a niche for itself in the local brewery scene. The brewery releases a new beer biweekly, if not weekly, and has just been certified to have its most popular beers available in local restaurants and bars. The entire process of opening the brewery was a lesson in DIY. "We actually did the entire build out and everything in here ourselves to save money," says Dave Finger, co-founder and VP of design and marketing. "The furniture is reclaimed barn wood and we made the bar."

Lost Borough's head brewer, Dan Western, will be concocting three fall seasonal beers, all available in September or October. The Oktoberfest is a hearty ale made with seasonal hops. The smoked pumpkin beer is made by smoking and pureeing pumpkin which gives the beer a more subtle pumpkin flavor and a hint of smokiness, as opposed to other pumpkin beers that can taste like eating a slice of pumpkin pie. The harvest ale is made with wet hops right off the vine (hops are typically dried and made into pellets and then added). In addition to its seasonal beers, Lost Borough will also soon add a sour raspberry beer and a black IPA to its lineup. Most of its beers clock in at around the 7 percent ABV mark.

ROC Brewing's owner, Chris Spinelli, has barely had a minute to stop and think about new beers to add to the brewery's already popular offerings. ROC (56 South Union Street) recently upgraded from a one-barrel to a seven-barrel system that increases its output from 200 barrels a year to 1500. Manning the upgraded system is new head brewer, Nick Mesrobian. You would think with all that extra product they are producing they would be stocked to the ceiling with beer. Not the case.

"That cooler is empty," Spinelli says, pointing across the room. "Our distributor is taking half of every new beer we make the day it comes out." Not a bad problem to have; ROC Brewing now has its beer in more than 50 restaurants and bars in Rochester, Syracuse, and Buffalo.

Still, ROC will be putting out a few new selections come fall. A pumpkin ale is planned, although not until the end of September so ROC can have it ready for its annual Halloween festivities. "We do a big event right around Halloween every year — we bus people out to a haunted hayride at Verhulst and a throw a big Halloween party," Spinelli says.

The pumpkin ale will obviously have that pumpkin flavor, but not too much spice, Spinelli says, "We don't want it to taste like pumpkin pie, you want it to be something you can drink and enjoy."

Atypical for the season, ROC will be brewing a barleywine-style ale called Opie's Revenge. After brewing, the barleywine will age in three different flavored barrels: one flavored with Maker's Mark, one with apple brandy, and another in an ice wine barrel that Montezuma Winery makes its brandy in. Referring to the upgraded facility and increased distribution, Spinelli says, "It's been unreal — but really at the end of the day, I wanted to do this because it's fun."

Swiftwater Brewing (378 Mt. Hope Avenue) has only been open for six months but business has been booming. "The reception has been really positive," says co-owner Andy Cook. Cook, along with his brewing partner, Patrick Meehan, started homebrewing in 2001. They bought the space on Mt Hope two years ago and spent 15 months doing the build out, along with a friend of Cook's from college.

The decision to open a brewpub versus a facility to solely brew beer came down to customer interaction. "I really liked the idea of being close to our customers and really getting to know them," Cook says.

Swiftwater has brewed more than 50 beers since opening, but have tested out a variety of recipes for each beer. "We'll always have an IPA; we'll always have something that is kind of dark. Our selection will be darker in the winter than it is in the summer. We always have a pale ale, a German lager, a sour beer, and something Belgian," Cook says.

When it comes to seasonal beers, Swiftwater will have an Oktoberfest due to be released in early September as well as a Fresh Hop IPA, made with hops that have been picked that day. Recently, Swiftwater has started serving food with a menu featuring items like a burger made with beef from a farm owned by Cook's parents, as well as sausage made with Swiftwater's IPA and prepared by McCann's Local Meats.

As for what to look for from other local breweries, CB Craft Brewers recently released its Harvest Jack Pumpkin Ale, described by owner Mike Alcorn as "pumpkin pie in a bottle." The brewery recently celebrated its 18th anniversary and launched the Krysztoff Baltic Porter, a malty, heavy-roasted, full-bodied porter.

Three Heads Brewery will be releasing its Cobbs Hill Black Lager, an "easy drinkin', lightly roasted beer with a snap from German hops," according to co-owner Dan Nothnagle. Also look for the release of its Buffalo Soul Jah Imperial Red Ale and the Bromigo Smoked Maple Amber.