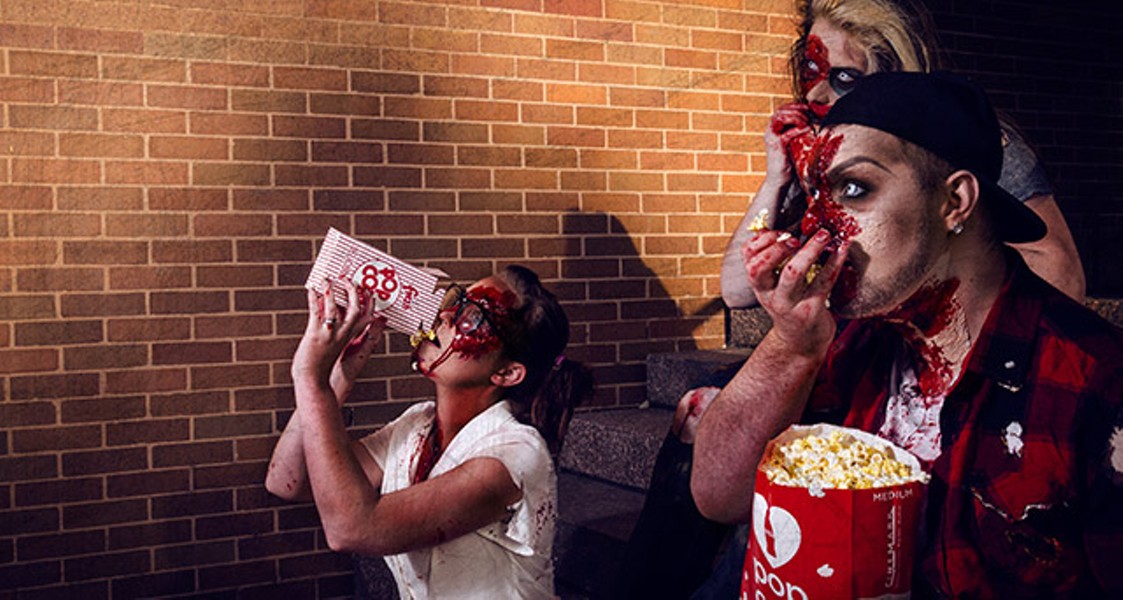 Many of you are eager to spend freshman year partying, exploring Rochester, getting involved in campus activities, and partying some more. Studying will presumably fit in there somewhere. But the cool kids all know the best way to spend your free time. That's right: shunning the outside world and taking refuge in movie theaters. Friends come and go, but films are always there for you. They're also one of the few social events that will work for everyone you'll meet.

Whether you're a future filmmaker or just a regular film fanatic, you're in the right place. Rochester is secretly one of America's greatest cities for film lovers — probably due, in part, to how the guy who invented film was one of our greatest locals. George Eastman's company, Kodak, may be struggling now, but Rochester's film community flickers as brightly as ever.

If appreciating the art of film is your ideal extracurricular, here are your havens. Note that these are some of the more unique film houses in Rochester; the area is also home to a slew of big-screen cineplexes. Find out more about them in the sidebar accompanying this article. For a list of Rochester's many film festivals, check the events article on page XX.

Still waiting for those enticing under-the-radar releases that are only playing in "select cities"? Remember that French film you heard about from the Cannes Film Festival, or that documentary about your hot-button issue of choice? For your fix of foreign films, indies, and documentaries, there's a good chance that The Little is the place to be.

This appropriately quaint theater in Rochester's East End, which dates back to the late 1920's (with a classic marquee to prove it), is the area's de facto home to most non-Hollywood fare. When locals want to catch sleeper hits like "Amour," "On the Road," "Frances Ha," or each year's Oscar-nominated short films, they know to head here. The Little also organizes the monthly One Take documentary series, and a wide array of other special screenings and events, making it Rochester's most active hub for independent film.

It's a little more than a movie theater, too. The Little has its own café, with fine meals and fancy coffee drinks, as well as a steady schedule of free live music. A great place to bring a date, assuming your date is up for something like "Fruitvale Station."

This underappreciated gem doesn't have the same holy-land reputation as The Little. But it's almost as singular: a nine-screen theater, tucked in a suburban shopping plaza, screening a variety of new releases unmatched by any local multiplex. Pittsford Cinema is as close as it gets to a something-for-everyone theater. You can catch each weekend's newest blockbuster — stuff like "Man of Steel," "World War Z," or the latest Pixar flick — but there are always a few independent and foreign films in the mix, making this almost like a second Little.

Thanks to Pittsford Cinema, you can skip the mega-multiplexes for most of your college years — and you'll be thankful, since this theater charges less than $10 for all non-3D tickets, and sells snacks at prices that won't require you to take out more student loans. Also, since the theater shares a plaza with Rochester's grandest Wegmans and a Barnes & Noble, plus plenty of other shops and restaurants, you can plan your whole day around a movie. (If you're relying on campus transportation, you'll probably need to.)

Once homework and exams and lab reports and other on-campus obligations pile up, you might find that you rarely have the chance to catch your most anticipated titles while they're still hot. But don't start looking for a way to pirate the flicks that you're missing (seriously, don't — you will get caught, and you will pay dearly). Rochester's second-run theaters have you covered whenever you have free time again.

Movies 10 (across the street from the 24-hour Jay's Diner, one of Rochester's greatest college hangouts) revives most major releases in their limbo between the big screen and Netflix, and at the divine price of $2 a ticket. Think about it: when you're sustaining yourself on Ramen noodles, do you really want to pay full price for the second "Hunger Games" or the third "Riddick" or the fifth "Paranormal Activity" anyway?

The Cinema — another marquee-fronted theater, which has operated under one name or another for almost 100 years — always screens two films that are several weeks past opening weekend. Every day, you can see both of the Cinema's offerings as a dirt-cheap double feature, and with most snacks priced less than $5, this may be Rochester's best theater for viewers on a budget.

This is it: Rochester's most important film institution, and also one of America's most important. The Dryden is inside the George Eastman House — a photography museum that is, itself, a local essential — but it's here that you can truly appreciate George Eastman's legacy, and see film history come to life. With tens of thousands of films at its disposal, The Dryden has one of the world's most extensive film archives, and it makes wise use of it. The theater screens six different films a week, every week, all year, usually in their original format. (If you're the kind of person who knows that a 35 mm print is better than any Blu-Ray, The Dryden gets you.)

It's not an exaggeration to say that The Dryden — a palatial theater that was renovated this year with a new look and a digital projector — shows everything. Just looking at the August schedule gives you an idea of how all-encompassing The Dryden is: "Upstream Color" and "Like Someone in Love" made their local premieres, John Waters' "Hairspray" played the same week as Fellini's "8 1/2," and the latter film was followed by the Ed Wood disaster "Glen or Glenda." Filmmakers Alexander Payne and James Ivory visited for Q&A's this year, and past guests include Meryl Streep, Roger Ebert, and Paul Thomas Anderson, among many, many others. We're lucky to have a landmark that makes everyone — from college freshmen to long-time residents to film legends — an adoring student of film.

Still can't make it to the screen that's calling your name? Fret not, film buffs: most area colleges have their own on-campus theaters, or at least a student organization that holds screenings throughout the year. Some schools have exclusive film rituals — like the University of Rochester's annual spring porno, put on by the school's Cinema Group — while others host events that are open to the Rochester community. For instance, the Rochester Institute of Technology presented the Banff Mountain Film Festival this year. Keep your eyes open for films events on your campus and others. And don't forget that your school's library — you know, where everything is free — probably has a DVD collection that can show you more than all of these theaters and an Instant Queue combined.