PHOTO BY MAX SCHULTE Kate and Kyle Korman at their home in Victor, where they brewed up the idea for Schittin Good Coffee while quarantining during the pandemic.
“Genius,” the inventor Thomas Edison is said to have once remarked, “is 1 percent inspiration and 99 percent perspiration.”

Had he known the story behind Kate and Kyle Korman’s breakthrough idea, though, he might have left room for constipation.

The Kormans are the proprietors of Schittin Good Coffee, their trademarked brand of artisan coffee whose name puckishly plays on the natural laxative effect coffee can have on some people. (No, their coffee does not contain a laxative.)

“It was an inside joke between us and the lightbulb just went off: Why not bring it to market?” Kyle said.

They began selling two blends, “Keep It Regular” and “Hurry Hurry Hurry,” out of their home in Victor in Ontario County a few months ago under the slogan, “Gets You Movin in the Mornin.” (It beats “The best part of waking up is Schittin in your cup.”)

The venture, they said, has kept them moving. The company currently ships a handful of 12-ounce bags a week to coffee drinkers across the country, and has acquired nearly 2,700 Instagram followers and a few hilarious testimonials in the process.

“I don’t know if it’s mental or what, but ever since I tried the regular blend, I’ve truly become a more regular person,” wrote Trent from Dallas, Texas.

“We think it’s funny, we’re having a good time with it and the reception we’ve gotten from a wide audience of folks has been similar,” Kyle said.

You might think it impetuous to name a product meant to be ingested and savored after a bowel movement. But the idea had been percolating for some time in the Kormans, who are married and both 35 years old.

They pulled the trigger late last year while they were stuck working their day jobs from home and eager for a new project. Kate is a database training manager and Kyle designs HVAC systems.

The couple conceived of Schittin Good Coffee in 2018 while on a getaway to Vermont prior to the birth of their son. Kate was seven months pregnant and, as happens with expectant mothers, she was constipated.

“It was early morning and we were walking around and at that point it had probably been a couple of days since I had gone and I was just like, ‘We can’t go any further until something happens,’” Kate said.

Kyle suggested a cup of coffee might loosen things up.

“I said, ‘Whatever kind of coffee it is it’s got to be shittin’ good,’” Kate recalled. “I don’t know where that came from, but it sort of stuck.”

Where it came from is backed up by science.

About 30 percent of people feel the need to go after drinking their morning joe. Scientists have found — presumably by way of some very invasive studies — that coffee of any sort can stimulate the distal colon, which helps push waste out of the body.

But researchers haven’t figured out why.

It’s tempting to attribute it to the caffeine, but the studies show that even decaffeinated coffee has the laxative effect. Some researchers suggest that the acidity in coffee makes the stomach dump its contents more quickly. Others speculate that something in coffee triggers the release of hormones that aid in digestion.

The Kormans don’t really care what it is, as long as their coffee is enjoyed.

“We said to ourselves, ‘This is a fun, tongue-in-cheek way to get people’s attention,’ and it has,” Kyle said. “But when they buy the product, they have to open the bag and try it. Ultimately, if we want any repeat business, it’s got to be a good cup of coffee.” 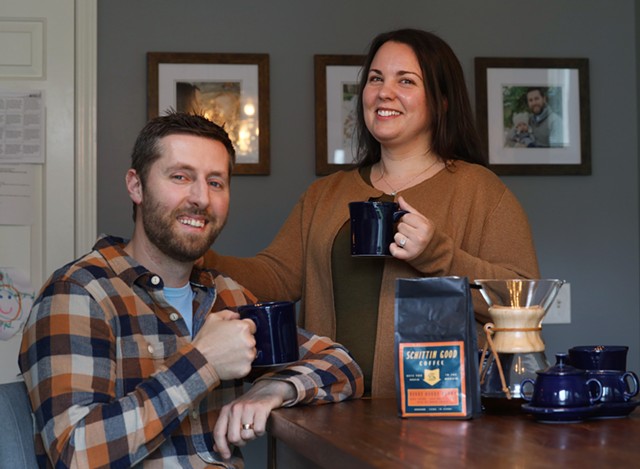 The Kormans consider themselves coffee connoisseurs, even coffee “snobs.” They like good, specialty coffee and are willing to pay for it. But they aren’t roasters.

Their coffee is roasted and packaged, the Kormans said, by a roaster in Oregon that produces coffee for private labels, like Schittin Good Coffee. Hence another of the brand’s mottos: “West Coast flavor meets East Coast grit.”

The couple said they taste-tested about a dozen blends from each of four different roasters before settling on their blends.

“If it could pass our taste test, we figure we’ve got 90 percent of coffee drinkers covered,” Kyle said.

Private label coffees are blends that are exclusive to one brand and not available to competitors. And they have become big business.

Last year in the United States, private label coffee sales totaled more than $1.2 billion and were up over 7 percent, according to a report in Stir, a coffee and tea trade publication that cited Nielsen Research data.

Schittin Good Coffee retails for $14.99 per 12-ounce bag and $4.99 for 2-ounce sample packs that can be ordered from the company’s website, schittingoodcoffee.com. The company ships for free.

There are currently a few hundred bags of coffee in a climate-controlled room in the Korman home awaiting shipping.

The Kormans are a cup-half-full kind of couple. The way they view Schittin Good Coffee is if it sells, they scale up; if it doesn’t, they drink up.

“The one thing we committed to was if we’re going to invest our time and money into creating a business, we want to make sure that if it fails, we like the product,” Kate said.