Saying goodbye, and good riddance, to 2020

I apologize for the language. I do. You expect more from a wordsmith. I know. But there’s really no other way to sum up 2020.

Not even the masters of language, the lexicographers at Oxford Languages, the maker of the Oxford English Dictionary, could settle on a single word or phrase, as they do every year, to define the chaos of the past 12 months.

In 2019, their phrase was “climate emergency.” In 2018, it was “toxic.” Those words, ominous by definition, now sound as hopeful as a pet Cocker Spaniel waiting at the front door.

Consider that Oxford reportedly measured the frequency of the word “climate” gathered from media sources around the planet and found that use of the word plunged by almost 50 percent in March, as the pandemic took hold.

Half the people in the English-speaking world stopped talking about the biggest threat to human existence in a single month! That’s how fucked up this year was.

The pandemic reshaped our world and our language in 2020. Use of the word “coronavirus” was on par with “impeachment” in January, according to Oxford’s annual Word of the Year report, but by April had become one of the most common nouns in English, overtaking “time.”

Words and phrases related to racial injustice, like “Black Lives Matter” and “systemic racism” and “allyship,” also surged. But their increased usage was overshadowed by pandemic-related terms. 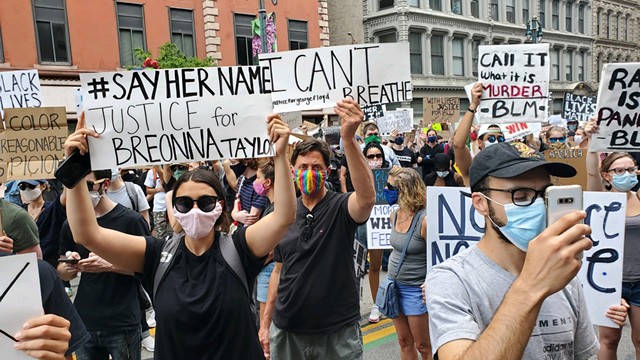 “Flatten the curve” and “quarantine” and “lockdown” became household terms. That went, too, for “social distancing,” which I loathed because it implies losing touch when what we really want to do in a pandemic is just keep our physical distance from one another.

We excelled at that this year. Oxford noted that for years the most common words that frequently went with “remote” were “control” and “island” and “village.” This year, they became “working” and “learning.”

How depressing. You can only roll out of bed and spend the day in your pajamas pretending to be “working from home” for so long before you realize that you’re a sponge getting paid with Paycheck Protection Program tax dollars to do nothing. Then again, maybe that’s just me.

Even the most upbeat of Oxford’s report — the short list of blended words, like 2017’s word of the year “youthquake” — was downcast. There was “Blursday” (meaning how the days and weeks in a pandemic just seem to blend together), “doomscrolling” (need I say more?), and “covidiots” (those people who cried “FREEEEE-DOMMMMMMM!” like William Wallace on the rack with every plea from scientists they don’t want to hear to wear a mask).

“The English language, like all of us, has had to adapt rapidly and repeatedly this year,” Oxford wrote in the report.

We sure did. At CITY, we adapted by rebranding ourselves a monthly magazine. Many of us, like many of you, are still tripping over the word “newspaper” when we talk about CITY.

But at least we’re still talking about it. Whatever you call us, we thank you for sticking with us and look forward to bringing you news, arts, and life coverage about our community that both informs and entertains in the new year.

I don’t know about you, but I’m ready for one.

This commentary was originally published as a letter to readers in the December 2020 issue of CITY magazine.