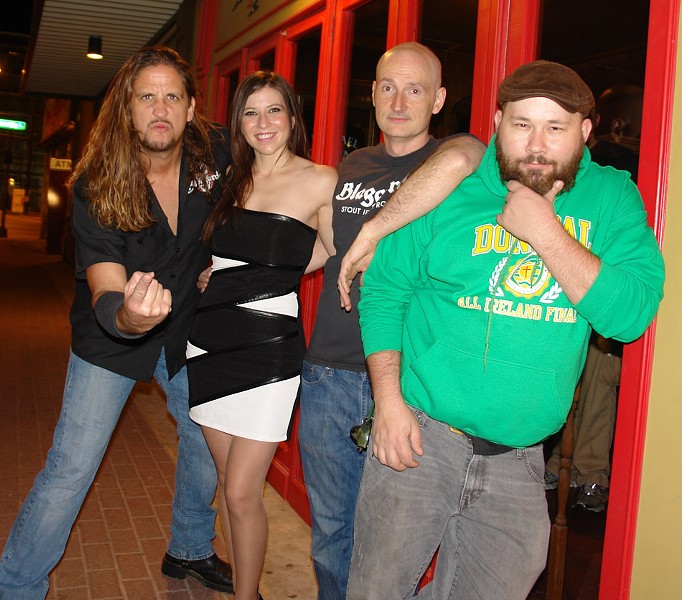 Amy Lynn & The Gunshow It's all horns, soul, and sass with this NYC outfit. The Gun Show lays it down in spades, keeping it retro-fresh (yup, made that up myself) while Lynn belts out with her beautiful voice, deprecating wit, and commanding presence. Be still my beating everything. (FD) amylynnandthegunshow.com

Blaggards It may be hard to guess that Blaggards originated in Houston, Texas, nine years ago. The band's mix of traditional Irish music and rock could come straight out of an Irish pub. Vocalists Patrick Devlin and Chad Smalley, fiddler Bonnie Riley, and drummer Michael McAloon will make you grab a pint and break into a jig. (AC) blaggards.com

Five Play A few years ago, jazz critic Nat Hentoff chose an album by Five Play, the all-female band led by percussionist Sherrie Maricle, as Album of the Year. The fact that a quintet of hard-swinging women could beat all the usual male suspects who dominate the jazz world speaks volumes about Five Play. (RN) divajazz.com/fiveplay.html

Gwilym Simcock Gwilym Simcock has found a way to distinguish himself in the crowded international jazz world. In composition and style, the young British pianist's influences stretch from jazz improvisers like Keith Jarrett to classical composers like Maurice Ravel and Igor Stravinsky. (RN) gwilymsimcock.com

Kurt Elling Whether he's scatting a jazz standard or interpreting a Brill Building classic, Kurt Elling milks a song for all it's worth. He's a ubiquitous presence at the top of the Down Beat Critics Poll Male Vocalist category and each of his 10 albums has been nominated for a Grammy Award. (RN) kurtelling.com

Marianne Trudel Marianne Trudel is among the most versatile pianists of her generation, equally riveting whether playing in a Chopin-like romantic style or with Cecil Taylor-flavored dissonance. In 2007 Trudel won the Prix toiles Galaxie de Radio-Canada for the best composition played at the Montreal International Jazz Festival. (RN) mariannetrudel.com

Mario Romano Quartet In the 1970's Mario Romano was an excellent young pianist on the Toronto jazz scene. After a 36-year detour, spent as one of Canada's major real-estate developers, Romano has returned to his first love, jazz. His quartet features Toronto's top players: Joe LaBarbera on sax, Roberto Occhipinti on bass, and Mark Kelso on drums. (RN) marioromano.ca

Monty Alexander's Harlem-Kingston Express As a teenager, pianist Monty Alexander played clubs in Kingston, Jamaica, with his band, Monty and the Cyclones. He made his first recording in the studio that Bob Marley later bought and named Tuff Gong. Since then he's been exploring the connection between his Jamaican roots and the jazz that flourished in Harlem. (RN) montyalexander.com

Thunder Body There are precious few non-Jamaican-born reggae artists that cut as deep a groove as Thunder Body. As an offshoot from the wildly successful Giant Panda Guerilla Dub Squad, TB has amassed three CDs in its relatively short history. What sets this band apart is what it calls science: freeform, psychedelic meanderings that complement, then counter, each song. (FD) thunderbody.com

Tim Berne Snakeoil Tim Berne is more about presenting new ideas than giving treatment to conversations other artists have already had. This alto-sax player guides his ensemble through unique passages that run deep, but still manage to give and take breath. Organic and different, but not too weird. (FD) player.ecmrecords.com/tim-berne-snakeoil

Trombone Shorty & Orleans Avenue Trombone Shorty brings all of the funk and soul of New Orleans to wherever he performs. Whether he's covering Ray Charles, singing his own songs, or blasting on the trombone, Shorty makes every part of your body want to move. He and his band blend Cajun, funk, soul, and hip-hop. (AC) tromboneshorty.com

Tyson Naylor Trio Pianist Tyson Naylor is a man of few notes but, in the case of his music, less is quite a bit more. A vital part of the jazz scene in Vancouver, British Columbia, Naylor and his trio are steeped in the experimental tradition that has emerged from Scandinavia over the last several decades. (RN) tysonnaylor.com