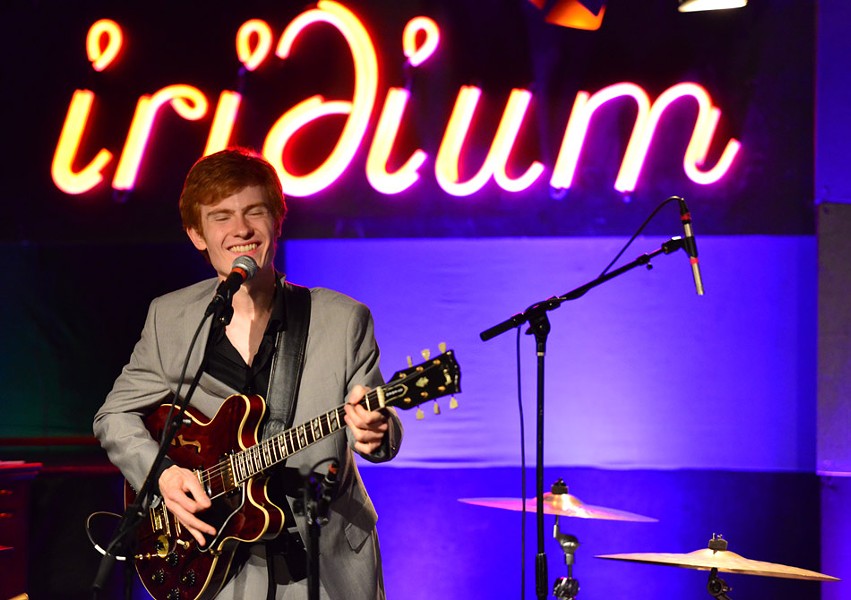 78 RPM Big Band Starting out as Oktoberfest band The Happy Wanderers, back in 1973, the 16-piece 78 RPM Big Band is based in classic big band, but often branches out into unique versions of contemporary cuts. (JC) 78rpmband.com

Bill Dobbins Plays the Music of Dave Brubeck Eastman Jazz Ensemble Director Bill Dobbins is a superb pianist who has enhanced the music of Clark Terry, Phil Woods, and Peter Erskine. In a solo concert, he'll take on the innovative and playful mix of jazz and modern classical music found in the compositions of the great Dave Brubeck. (RN) esm.rochester.edu/faculty/dobbins_bill

Diana Panton Juno nominee Diana Panton is a rising star on the Canadian jazz scene and beyond. Her tone is blissfully youthful, offset by her precious phrasing and trill. She is as heartbreakingly beautiful as her voice. Stick around to hear her take on "Moon River." You'll be sorry if you don't. (FD) dianapanton.com

Flat Earth Society Flat Earth Society is one of those gloriously deranged bands whose sound picks up where Frank Zappa, Thelonious Monk, Sun Ra, and John Cage left off. All 15 of the band's musicians are superb players; together they create textures, voicings, and melodic flights that transport the listener to parts unknown. (RN) fes.be

Jason Marsalis Vibes Quartet He is a member of the first family of jazz, the son of Ellis Marsalis, and brother of Wynton, Branford, and Delfeayo. So it's no surprise that Jason Marsalis is a master of the vibraphone. Whether he's playing with the traditional two mallets or using the complex four-mallet technique, Marsalis traverses the bars with equal measures of skill and melodic eloquence. (RN) jasonmarsalis.com

John Escreet With six albums in as many years, pianist and composer John Escreet has gained recognition for his devotion to improvisation. His creativity and daring has made his work with bassist John Hebert and drummer Tyshawn Sorey stand out to critics around the world. (JC) johnescreet.com

Lou Gramm Band With a pile of hits with Foreigner, Rochester homeboy Lou Gramm is truly a jukebox hero. Gramm split from the group in 1990, leaving Foreigner a mere shadow of its former self. Gramm has had moderate success as a solo artist and even took a stab at Christian rock. He's back now rockin' an rollin' and wailin' all hot blooded. (FD) lou-gramm.com

Myles Mancuso The term "prodigy" has been thrown around a lot over the last few years to describe guitarist Myles Mancuso, and when you hear the 18-year-old front his band through a mix of funk, rock, and blues, you'll see why. (JC) mylesmancuso.com

Ryan Dilmore There's a peaceful tenderness to the tunes singer-songwriter Ryan Dilmore creates. The Rochester-native — now living in L.A. — carries a common theme of community through his music, so if you're a fan of musicians like Jason Mraz, James Blunt, and James Taylor, pay close attention. (JC) ryandilmore.com

Shai Maestro Trio Born in Israel, Shai Maestro began studying piano at the age of 5. At 8 he was listening to Oscar Peterson's "Gershwin Songbook" and, as a teenager, won a full scholarship to Berklee College of Music in Boston. Known for his work with bassist Avishai Cohen, Maestro is now garnering praise with his own trio, which includes Jorge Roeder on bass and Ziv Ravitz, drums. (RN) shaimaestro.com

Snarky Puppy The tagline Snarky Puppy uses is, "Music to move the brain and booty." It's pretty spot-on for the up-beat, creative tunes the instrumental fusion band is putting out. The group is seen more of a rotating collective of nearly 30 musicians, many of whom perform regularly with artists like Erykah Badu, Snoop Dogg, Justin Timberlake, and Roy Hargrove. The band just won a Grammy for Best R&B Performance for its version of Brenda Russell's "It's Something." (JC) snarkypuppy.com

Steve Martin & The Steep Canyon Rangers Featuring Edie Brickell Steve Martin is more than just a wild guy, and The Steep Canyon Rangers are more than just a bluegrass band. The group exhibits breathtaking dexterity, beautiful harmony, and a slick sense of humor — just dig the group's "Atheists Don't Have No Songs." For his latest album, "Love Has Come For You," Martin collaborated with roots singer Edie Brickell. Note: both performances are sold out. (FD) steepcanyon.com

Sunna Gunnlaugs Trio She may be from Iceland but the contemplative sound of pianist Sunna Gunnlaugs is clearly influenced by American jazz greats like Bill Evans and Keith Jarrett. What makes her music truly unique is the manner in which she infuses her jazz with evocative strains of Icelandic folk music. (RN) sunnagunnlaugs.com

Woody Pines With a rambling soul and a twang, Woody Pines writes songs firmly planted with American roots and pleasing for any lover of folk. (JC) woodypines.com