January 08, 2020
January is Jeff Riales’s month. He’s in the midst of a month-long residency, every Thursday night at Abilene Bar & Lounge. And Friday night at Hochstein Performance Hall, he returns to the event that he inadvertently helped to create, “If All Rochester Wrote the Same Song.”

About a decade ago, local singer-songwriter Scott Regan, the host of the weekday morning show “Open Tunings” on WRUR-FM (88.5), was snooping around Riales’s basement. Relax, Regan had been invited; it was a party. And he couldn’t have picked a better basement. Regan found a notebook Riales keeps of song lyrics and ideas, and in particular, the line “Don’t Go Drinkin’ on an Empty Heart.” It was nothing — just a title for a song yet to be written, Riales said. Regan asked if he could give it a try.

Regan wrote the song. Other local songwriters picked up the title and wrote their own. “The next thing I know, there’s three people who’ve got the song written, and I haven’t finished mine yet,” Riales says.

Riales, Sarah Long Hendershot, Steve Piper, Sarah Eide and Kelly Izzo Shapiro are all local musicians who were on Evan Dawson’s WXXI talk show “Connections” last week, chatting about Friday’s fifth edition of “If All Rochester Wrote the Same Song.” Through the window that separates the studio from the room where I’ve been confined to an office cubicle, I could see their mouths moving. I turned on the radio so I could hear what they were saying. This was easy journalism pickings.

“I moved here because I felt the music scene fit me,” Eide was saying. She came to Rochester a year ago. “I need to live in a cheap place,” she chuckled, “that still has a thriving arts scene.”

The first version of “If All Rochester Wrote the Same Song” came together slowly. But after those first three or so songs, that thriving arts scene that Eide was looking for kicked in. Hendershot, lead singer of the local band The Jane Mutiny, decided there were enough versions of “Don’t Go Drinkin’ on an Empty Heart” floating around to create a show. Twenty-six, in fact. It played to a packed Bernunzio Uptown Music during the Rochester Fringe Festival.

That was 2015. The next year was two sold-out nights at Bernunzio for “If All Rochester Wrote the Same Song,” with local songwriters picking up the challenge of “You’ll Thank Me Later.”

Having outgrown Bernunzio, the next year the show moved to Hochstein Performance Hall for “How Did We Get Here?” Last year it was, “I’m a Fool for This Town.”

And this Friday, “No One Will Ever Know.” Twenty-two songs, 21 performers. Kerry Regan, Scott’s brother, and who also plays in Watkins & the Rapiers, snuck in two songs.

They’re all voted in. The last few years, it’s been a four-person, anonymous panel voting on the entries. At an undisclosed location, of course. This year, it took the panel seven and a half hours to listen to every note of the 62 entries. And it wasn’t simply a matter of voting on the best. The judges were charged with creating a show that hit on multiple genres. Not too much country, not too much blues, not too much Joni Mitchell.

The announcement of the show’s title is what writers call a prompt. Prompts come in all shapes. As Eide notes, February is Album Writing Month, with songwriters challenged to write 14 songs. Very similar to November’s NaNoWriMo, or “National Novel Writing Month.” Closely related to September’s TaYok92ThaDisco, or “Take Your Dog to the Disco.”

Hendershot figures the five editions of “If All Rochester Wrote the Same Song” have inspired 200 original songs, some of which have been recorded and released by Rochester musicians. 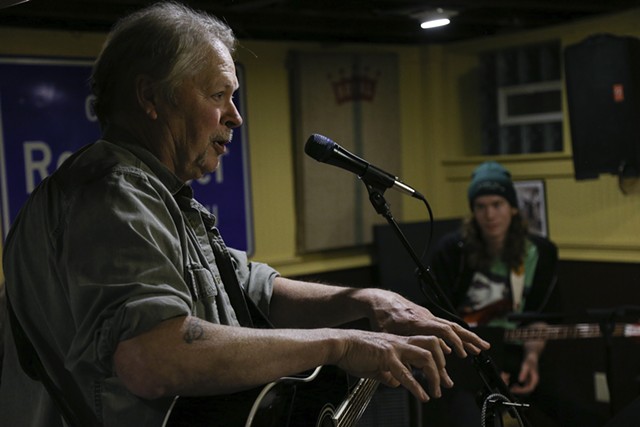 The versions by Riales and Eide are introspective, suggesting a deeply buried secret; Riales doesn’t even reveal the secret. He’s allowed that privilege, but you can tell from the words that it’s honest, and real. Words that often reflect his growing up in Memphis, the cars he’s owned, the chill of watching the National Guard come to his street during race riots, the secret to picking winning lottery numbers. Superb songs, free of clichés, in a voice that falls somewhere between Johnny Cash and Waylon Jennings. For my money — an inconsequential bet — Riales is the best songwriter in Rochester.

Some of these “No One Will Ever Know” compositions go in dark directions. Yet Regan and Connie Deming wrote one that isn’t dark at all, but an appreciation of being alone with nature. Fred Vine’s is a swinging jazz number that brings to mind Kurt Elling. Richard Storms — co-owner of Record Archive — composed the “In-A-Gadda-Da-Vida” of tangos, a sprawling narrative of anarchist Emma Goldman, complete with dancers.

Half of this year’s musicians are newcomers to the show. But they’re not new to songwriting. Kelly Marie teaches orchestra at The Harley School. She decided to write 100 songs in 2019. No. 73 was “No One Will Ever Know,” an ode to gas-station coffee that’s as challenging as one of Laurie Anderson’s experimental pieces. Another new face, Kelly Izzo Shapiro, began writing one every day while at college. She’s still at it, giving herself a little break here and there, but notes: “It’s good to keep the muscle warm.”

The Levin Brothers return for a show on Saturday, January 11, 8 p.m. at Lovin’ Cup Bistro & Brews, 300 Park Point Drive in Henrietta (not too far from the RIT campus). Tony Levin, an Eastman School of Music grad, has played bass with some of the top names in pop and rock, including Peter Gabriel, King Crimson and John Lennon. He also uses the Chapman Stick, a sorta-bass played by tapping the strings. Pete Levin plays keyboards and synthesizer, and has worked with Gil Evans, Paul Simon, Jimmy Giuffre and many others, as well as recorded for film and TV and releasing his own albums. They’ll be joined by percussionist Jeff Siegel and guitarist Jeff Ciampa, both of whom have serious résumés. Tickets are $20 advance, $25 the day of the show, and are available at Lovin’ Cup and ticketweb.com…

“The Beatles, The Bible and Manson.” Sounds like an unlikely trio. But area writers Tim and Deb Smith will explain the intriguing connections — with limericks — at their Sunday, January 12, 2:30 pm talk and book signing at Penfield Public Library, 1985 Baird Road in Penfield. It’s free, but you must register at penfield.libraryweb.org or by calling 340-8720. Copies of the book ($19.95) will be available…

Elvis Presley would have turned 83 on Wednesday if he were alive today. The Albany-area’s Mark Gamsjager & The Lustre Kings keep the torch burnin’ love at the Elvis Birthday Bash on Monday, January 13, 6 p.m. at Record Archive, 33 1/3 Rockwood St. It’s free…

The Genesee Reading Series of Writers & Books, 740 University Avenue, presents Sonja Livingston and Rachel Hall on Tuesday, January 14, at 7:30 p.m. Livingston’s newest book, “The Virgin of Price Street,” sees her returning to her childhood church in Rochester, to see where she and the Roman Catholic Church have been since then. Hall, a Professor of English in the creative writing program at the State University of New York at Geneseo, is presenting “Heirlooms,” an interconnected set of stories set in the Holocaust, Israel, and America. Admission is $5.