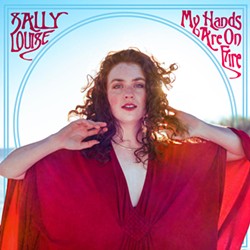 Opera singer-turned-indie singer songwriter Sally Drutman seemed to appear as a sudden apparition last July, when she released her dream-like first single “Milky Blue” as Sally Louise. Less than a year later, Louise has wasted no time in expanding her stylistic palette across a sprawling collection of 10 self-possessed songs with “My Hands Are On Fire,” available on May 14 via Desert Flower Records.

On this debut full-length album (itself an increasing rare occurrence as more and more artists stick to releasing singles and EPs), it’s impressive how quickly Louise has settled into her compositional identity: a fluid elixir of pop, soul, folk — and in the case of “I Won’t Call Your Bluff,” she even employs elements of ‘50s doo wop.


But none of it would work if Louise weren’t also a confident vocalist whose classical training gives her keen pitch security and effortless intonation. There are straightforward, catchy songs such as “Bodily Exile” — a four-chord anthem of self-realization and liberation — and the slightly contemptuous pop-rock tune “Sighs,” but she also stretches out and soars on more vocally dynamic tracks like “Honey Hold On” and “Never Be the Same Again.”


Regardless of the song, Louise sings with conviction, as if each phrase contains a cathartic new revelation. “Honey Hold On” is especially riveting as the singer accompanies herself on electric guitar and issues a passive aggressive farewell to a former lover that echoes the sentiment of Bob Dylan’s “Don’t Think Twice, It’s Alright”: “Can you tell by the shadow of my hair against the floor I ain't been sleeping very well without your shoes by the door?/ And at the same time all these pills haven’t reached my very core/ Honey, I hope you’re holding on tonight.”

Throughout the album, there are also brief flirtations with gospel music, including “Yoli’s Shoes,” an understated ode to self-empowerment that utilizes quasi-choral textures with uplifting results. Sally Louise is backed on various tracks by Jordan Rabinowitz on bass and drummer Chris Palace. But in terms of emotional resonance, the singer-songwriter does more in moments with less instrumentation, when her vocal sincerity and technical skill seize the spotlight.