Maisie Gillan was 9 months old when she happened upon a stray prescription methadone pill on the floor of her neighbors' home, swallowed it, and died a few hours later.

The story of her fatal overdose in January made national news and, on Monday, brought Sen. Charles Schumer to her Brighton home to push the Food and Drug Administration to enhance the safety of opioid packaging.

Specifically, Schumer urged the FDA to require that all types and doses of opioid pills be distributed in so-called blister packages - a laminated piece of foil the holds individually-sealed capsules in a tiny plastic pouch.

Dispensing pills from a blister pack can be challenging for any user, particularly elderly people. But the packaging reduces the likelihood of children getting into the pills and spills that can occur when loose pills are distributed in prescription bottles.

Police traced the methadone pill Maisie ingested to a 75-year-old woman who had visited the neighbors' home a few days before Maisie. They theorized the woman, who was prescribed the medication, unwittingly dropped a pill from her bottle as she dispensed it for her own use. 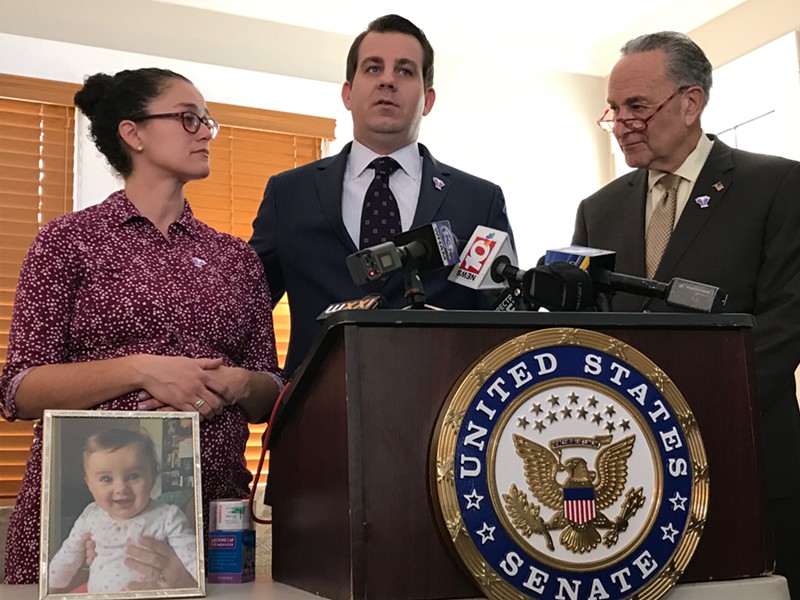 A new law adopted last year to curb opioid addiction gave the FDA the authority to require special packaging for opioids that pose a risk of abuse.

The law does not specify what type of packaging. But the FDA has proposed requiring opioid manufacturers to supply five-, 10- and 15-count blister packs for opioids commonly prescribed for short-term pain relief following surgery.

Schumer said the FDA should go further and require all opioids be distributed in blister packs. He released a letter he wrote to the agency urging it to take action."The effort to do it is small and the benefit is huge," Schumer said. "It should an easy thing to do and I hope the FDA will hear our plea and get it done right away."

He spoke from living room of Maisie's parents, Adam and MaryBeth Gillan, the latter of whom was nine months pregnant and scheduled to be induced later in the day.

"To MaryBeth and I, this is a matter of life and death," Adam said. "For other parents, we do believe it should scare you. We don't want to coy about that. It happened to us, it can happen to others."