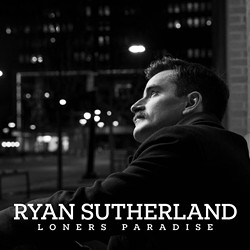 If you’re into artists of the post-troubadour pop movement — such as Webb Wilder, Marshall Crenshaw, or the late “Excitable Boy,” Warren Zevon — then the waltzing ease of Ryan Sutherland’s new CD “Loner’s Paradise” is for you. The Rochester singer-songwriter rolls out the dreamy music with equal parts mystique and stark reality.

The mood and tone are held together by a guitar style so casual it almost sounds random. It's not that Sutherland is a bad guitarist; a flashier player might have steamrolled the delicate spirit of the songs. Sutherland is the right man for the job.


“Loner’s Paradise” is for anyone who seeks melancholy. It isn’t strictly for loners, as the title suggests. Case in point, there are several independent contractors bangin’, clangin’, and twangin’ away on this Ben Morey-produced album. Guest artists like drummer Alex Coté on drums and pianist Katie Morey add nice flourishes throughout. Ben Morey also makes slick contributions as a multi-instrumentalist.
Frank De Blase is CITY’s music writer. He can be reached at fdeblase@rochester-citynews.com.