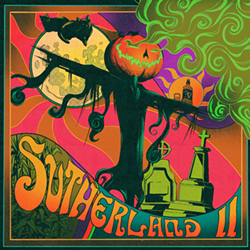 When you’re broke and living in a dying town that your friends are fleeing, heaven might look like moving into a two-bedroom apartment. This is the state that Rochester singer-songwriter Ryan Sutherland sings about on his new album, “Sutherland II,” a collection of fuzzy rock and burly but sparse folk songs that often feel at war with each other.

Conflict has long powered Sutherland’s career. The leader of the local band The Revelators, he dedicated his 2020 solo album, “Loner’s Paradise,” to “all of the working-class people out there struggling every day to get by.” He’s sung about his granddad pouring drinks and how “lonely shadows swallow your soul.” But Sutherland’s latest batch of tunes turns up the volume to span some of the most beloved rock and roll styles of the past 50 years.


“Keep Breaking Down,” a reworked track from an earlier EP, prominently features an electric guitar that howls like it’s borrowed from Jack White’s personal collection. Meanwhile, the psychedelic “Incendiary” sounds ripped from a long-forgotten proto-punk LP out of 1970s Detroit.

These full-band touches, recorded at Ben Morey’s Submarine Sound Studio, bring Sutherland’s songwriting to blazing life, especially with Alex Coté backing him up on drums. The shuffling beat that powers Sutherland’s rockabilly highlight “All Those Tears” ought to make it a radio hit.

But when he’s alone strumming his acoustic guitar — bemoaning Catholic traditions on “Midnight Mass” and giving bathroom-mirror meditations on mental health on “Breathe” — the drama tends to dissipate. Sutherland regains it, though, with a fitting folk narrative that tackles the death of manufacturing in our region and the subsequent exodus of residents to the sunny southern states and West Coast. “Everybody wants to leave upstate New York,” he sings. “Everybody wants to be somewhere nice and warm.”


That minor-key ballad, “Everybody’s Leaving,” follows a hard-luck narrator working a dead-end factory job and wondering, “Who the hell wants to rebuild?” As such, it becomes a fatalistic Rust Belt counterpoint to the 19th-century songs that celebrated the Erie Canal and the boomtowns it helped build, like Rochester.

Through all the grime, Sutherland’s heart stays here. His song’s narrator might make a plan to flee, but he’s not going anywhere. He’s got roots here. Plus, a bigger apartment is only a new lease away.

Patrick Hosken is a freelance writer for CITY. Feedback on this article can be directed to dkushner@rochester-citynews.com.