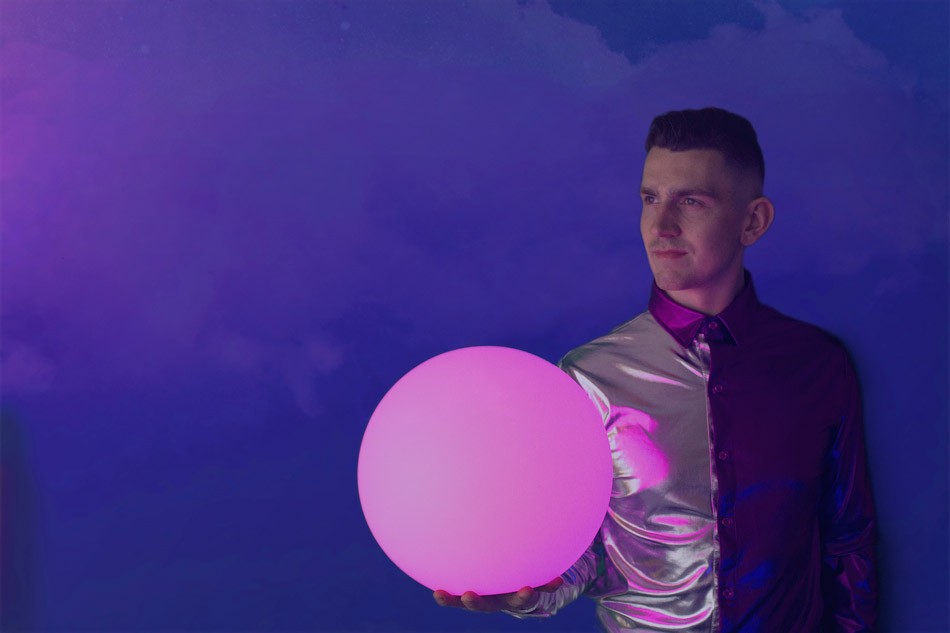 He calls it “space pop.” Ryan Cullinane is a Rochester-based electronic artist who soaks his sound in ethereal, new-wavey gravy and effervescent possibilities. It’s inescapable, it’s catchy. The genre caught Cullinane’s attention while he was living in Florida.

“I was a huge metal guy,” Cullinane says. “I used to be the singer in a thrash metal band. But it was the age of Spotify and Pandora. I’d listen to a few stations that were out of my comfort zone. Artists like St. Vincent, Grimes, Phantogram were popping up and I was like, ‘Wow, I’m really into this whole sound. It definitely felt like this weird, surreal, dreamlike combination — very atmospheric, and I was drawn to it immediately.”

Cullinane got right to work. He released his first of four albums in 2013, under the moniker of Ryan Flynn. It was as if Cullinane were on an electronic music safari, on the hunt for his own slant to the genre. He thinks he’s finally figured it out with his latest release, an eponymous, six-song endeavor.

“They all have been rather experimental as far as finding a sound,” he says of his records. “But this new one, it pretty much sealed the deal for me.”

This is more than a mere solo project. ‘Ryan Flynn’ is, in fact, a duo. Cullinane’s friend Andrew Cavaciuti, who mixed the EP, is also the guitarist and keyboard player during live performances. Cullinane handles live programming, keyboards, and at times, theremin.

“Onstage, there are like four things going on at the same time,” Cullinane says. “The laptop provides our bass and drum tracks and it’s me and him switching off on bass and keyboards, adding parts here and there.”

This can be dangerous, inviting the opportunity for mistakes to pop up and crash the party. Cullinane seems unfazed.

“Mistakes do come,” he says. “It’s usually based on some glitch. That’s the beautiful part of electronic music: Mistakes happen. There are lots of moving parts, and that leaves room for improvisation. And we try to leave space within the set for us to do that.”

Cullinane says that, when first seeing the laptop onstage, some fans are quick to dismiss it as “just another DJ.”

“But I think we live in an age where it’s cool to use a computer now,” he says, “especially when you’ve got live instruments and riffs to back it up. I would never dismiss anyone using a computer. A lot of pop music is generated by a real good singer and a lot of technology. The beauty in the future is mixing those live instruments with that whole technological aspect. It opens up endless possibilities.”

Cullinane's words can help be a guide if a listener initially finds the music opaque. “I want the voice to be a part of this electronic world,” he says, “a little narrative to tell the story.”

Storytelling aside, Cullinane goes for a childlike, exploratory approach when writing songs. “My favorite thing to do is just make sounds,” he says. “If it sounds like a riff, then I go, ‘Can I sing over this?’ So yeah, music comes first ahead of the lyrics, more often than not.”

Though Ryan Flynn is not the only group there, the electronic music scene in Rochester certainly isn’t crowded, according to Cullinane.

“There’s a scene, but it’s very underground,” he says. “Rochester has a great music scene. That’s why I moved up here from Long Island. I got this vibe from Rochester that it’s eclectic, and there are a number of great musicians up here.”

Even in an already bustling local scene, Cullinane feels his duo brings something different stylistically. “We get thrown in with a lot of rock bands, and they come up after our set and ask, ‘What was that?’ It’s a very refreshing feeling, knowing you stand out.”

This article has been updated to more accurately reflect the names of the musicians.