Ruth Scott and the rising tide 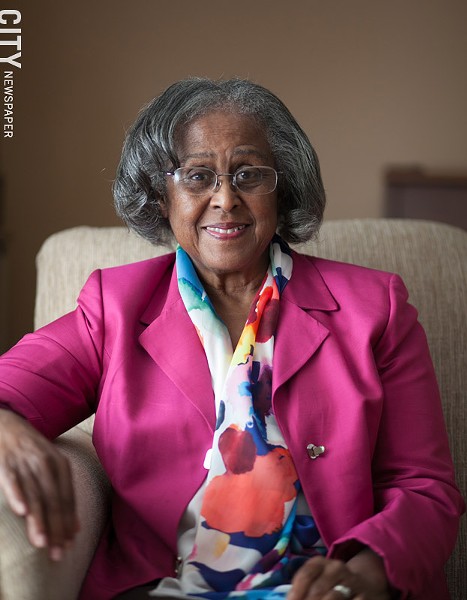 PHOTO BY MIKE HANLON Ruth Holland Scott was the first black woman to serve on Rochester City Council. She also ran for mayor.

"The guys would take these long poles that you used to raise and lower the windows and lift the wig off her head," Scott says. "And she would wake up and say, 'recess!' So we had a series of recesses all day long."

To compensate for the underwhelming environment, Scott and a friend began schooling each other. They gave assignments, exams, and held the other accountable for her performance.

Scott says her sixth-grade experience is proof that everyone, regardless of background, can succeed with the right attitude and support. It's a message she says she has tried to embody and share as a community leader in Rochester.

Scott is former head of the 19th Ward Community Association and was the first black woman to serve on Rochester City Council. She became Council president in 1986 and eventually ran for mayor, but lost in a five-candidate primary race to Bill Johnson.

A teacher by profession, Scott has held many positions in the Rochester school district. She set up the reading lab at the former Wilson Junior High, was dean of women at the old Madison High School, and has served the district in advisory and troubleshooting roles.

Scott has also completed a memoir, "The Circles God Draws," which she says is about "searching for and finding purpose in life despite the boxes people may try to force you to enter."

Given her background and her history, Scott is able to offer unique insights on education and politics in Rochester. She and her husband, Bill, moved to the city in 1969 — a transformative and vital time in Rochester politics. The city had active Democratic, Republican, Liberal, and Conservative parties, Scott says, though the GOP, on the whole, was much more progressive than many party members tend to be now.

And the local Democratic Party was being reinvented from the inside by its Kennedy-inspired younger members, who organized, gained power in the committees, and eventually took over leadership of the party.

"There was just lots of activity going on," Scott says. "It's interesting that we came just at that time."

In a recent conservation, Scott talked about politics, the state of Rochester's schools, and investment in downtown versus investment in the city's neighborhoods. The following is an edited version of that discussion.

CITY: What was it like to be the first black woman on City Council?

One person said to me when I won, "You know, you're in a wonderful position. You can stand in the doorway to City Hall and block anybody you don't want to come in." A lot of people have that feeling about being in powerful positions.

And I said, "That's not the way I view it. My job is opening doors to anybody who wants to come in."

Many people say that metro schools may be the only way to break up the concentrated poverty in the city and to ensure that everyone has a chance at a quality education. But almost no one believes we'll ever get metro schools because the community's so divided.

I do think that the [school district's] urban-suburban program has some potential to break it up. But I think more than anything else, job opportunities will break up the poverty. People have to have some place to work; they have to have skills. And I think the community college will be a great partner in helping people get skills who may not be getting them from their school district.

I don't know what's going to happen with the school district. I wouldn't be surprised if at some point it might be divided.

In Michigan, there are a number of small cities where the districts were not able financially to improve the schools enough and people were fleeing. I see the same thing happening in Rochester.

The [Albion] school board voted to dissolve the high school and has made an agreement with a nearby town, Marshall, to take the children from the district.

I used to suggest when I was on City Council that there be shared use of buildings. A lot of buildings on the outskirts of Rochester were next to towns, and my thought was that the beginning steps of collaboration would be to share those buildings. If [suburban] districts were overcrowded and just needed one or two classes, why rent space in a for-profit place? Rent space in one of [the RCSD's] buildings that had extra room. Then they would begin to see that city kids are not so bad, and the city district is not so bad.

But that was never seriously considered by anybody but me.

Whenever City publishes anything about the role poverty plays in the schools, people scream, "But it's the parents' fault!"

So I think that's a big excuse. And I think everybody adopts it when it comes down to some crisis. We have always had poor kids in this country, and we've had poor kids who've done some extraordinary things. Why? Because somebody decided to adopt them, to encourage them, and to give them the skills they need.

The question is, "Where do we start?" not "Whose fault is it?"

I think we start in communities. We go back to neighborhood schools, because I think it's much easier for a neighborhood to wrap itself around [a school]. When you have schools that are adopted by the neighborhood, people have a vested interest and they get along better.

People say they want to help schools, but helping them is not going in and taking over. First place, we've got to start with the board, and we've got to straighten some things out with the administration of the schools. We've got to find a way to make partnerships with the teachers. And then of course we have this dumb testing thing that's taken hold in the nation and gone crazy. It has nothing to do with learning. And they don't even know if the tests are valid or reliable. So somehow that thing has to be broken.

And we should be providing enrichment. How many kids get to go to an auditorium and listen to music? Or see a program on science demonstrations? In the city, not too many. How do you expect them to be interested when they see nothing related to the real world?

If the religious institutions would shake themselves out of their segregational places and reach across the aisles to each other and partner with the school district and the parents in the city, a lot of good things could happen and progress could be made.

We're divided in so many ways: the schools, the neighborhoods, city versus county. When did we lose that sense of community?

If I were to pinpoint something, I think [it was] once people felt like the possibility of having quality, integrated schools was lost. I think that's part of when it began to slip away from us in Rochester.

And it's not like the schools were perfect. One of the reasons why Wilson is where it is today is because the 19th Ward Community Association insisted that Wilson be improved. We wrote a grant to provide counseling and sort of like pre-diversion of youth so they wouldn't be entrenched in the public safety system. We wanted to show other agencies how to deal with these kids — what kind of programming to do. And we did that very successfully.

We have a competitive primary race going on between Richards and City Council President Lovely Warren. A big part of Warren's platform is to build up the neighborhoods, but Richards says the city already invests much more in the neighborhoods than it does in downtown.

That is where the answer is going to be — the answer to a lot of problems in the city. It's going to have to grow from the neighborhoods. Nothing ever grows from the center out.

Ask [Richards] when he's adding up what he spends, is he including the tax abatements he gives to corporations? Is he including the job-creation agreements that are never, ever lived up to? And is he considering the fact that the neighborhoods are much larger? It's not an apples-to-apples comparison.

What rising tide ever lifted all boats? If your boat has a hole in it or you don't have a boat, you drown.