"Some of My Favorites" by Dan Neuberger

"This is probably my last solo show," says photographer Dan Neuberger of the current exhibit of his work at Image City Photography Gallery." I'm 86, and shows are a lot of work and expense. So I decided to show my favorites — the ones that I'm particularly fond of."

Born in the former Yugoslavia (now Croatia) in 1929, Neuberger's family moved to New York City when he was 11 years old. Though he became interested in photography at age 16, when his brother gave him a 1933 Rolleiflex, he pursued a degree in Chemistry at Columbia College. Still, he was active in the camera club.

Neuberger's relationship with photography is one based equally in the love of science and art. After earning a Ph.D. in Physical Chemistry at the University of Rochester, he became a photographic research scientist in the Kodak Research Laboratories, where he worked until retirement in 1986.

"I think being successful is being in love with your work," he says. "I love science, I love research, and I love photography." Neuberger's career at Kodak offered him all of the above, as well as free photographic supplies, and he developed a passion for darkroom work. He was active in the Kodak Camera Club, and was the first scientist Kodak sent to Paris to collaborate with French colleagues for a year.

Neuberger's work has been collected privately and is also part of corporate, hospital, university, and museum collections. One of his images of Grand Central Station earned the Best-of-Show award from the Chautauqua National Exhibition of American Art in 2000, against more than 900 other works in all media.

The show at Image City, where Neuberger is a founding partner, includes about two dozen images spanning about five decades of work, from the 1974 silver gelatin print of "Paris Rooftops" to the colorful set of near abstract images taken fewer than five years ago.

Much of Neuberger's work can be described as clean and elegantly graphic, with an emphasis on the balance of geometric forms in space. This is true throughout his career, despite his wide range of interest in subject matter.

"A gallery director once asked me how I would describe my work with one adjective," Neuberger says. "And I said, 'uncluttered.' Now, people who have seen my house think that's very funny."

Some of the show's stars are images shot on a trip Neuberger took about four years ago to Athens, Istanbul, and Greece. "Santorini happens to be my favorite place in the whole world," he says. A coastal city in Greece, Santorini is known for white buildings with vivid blue rooftops. But rather than snapping the typical tourist pictures, Neuberger captures the sort of nuance you'd notice if you were to really spend time in the place, slowly wandering and savoring the sights, focusing on your own unique response to the setting.

A few pictures from his "Steps" series are bold details of steps to a terrace in Santorini. Painted in high contrast, the stairs are the focal point, twisting up or down and away amid walls that serve as banisters. Through digital tinkering, the island's bold colors are reduced to a graphic-heightening grayscale. In more than one image, the striking blue sky is manipulated to a flat black, creating an eerily still environment, sharp against the blindingly white, rough walls lit by no source.

The back wall of the gallery holds a set of Neuberger's "Shapes, Light, and Color" pieces, seven heavily-manipulated images taken three years ago at the Hirschhorn Gallery in Washington, D.C.

"They're funky pictures," Neubergers says, "so I said, 'Let's hang 'em funky.'" Each of the images is set at an angle, so that the pictures seem to tumble across the wall, busting out of stuffy gallery rules.

But Neuberger is right — the way they're hung complements the content. In the images, rows of long fluorescent bulbs accent very geometric spaces, which Neuberger has cropped to isolate specific areas of interest. He has completely transformed what was there by digitally altering light gradation on some walls creating solid, flat planes of color; in other areas he saturated the light-to-shadow spectrum along a wall, so that it flows smoothly from one neon color to another. Corners are flooded with light, and portals to other, darkened rooms become negative objects. Neuberger points out one image in which the room is actually upside-down — "Why not?" he says.

Between the tilted canvases, the shifting and disorienting planes, and the vibrantly glowing walls, the works call to mind a combination of Escher's impossible rooms and light artist Dan Flavin's created environments, and give the impression of a futuristic dwelling. 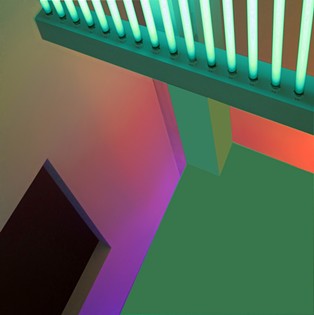 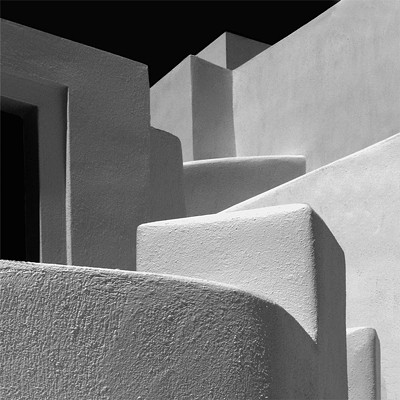 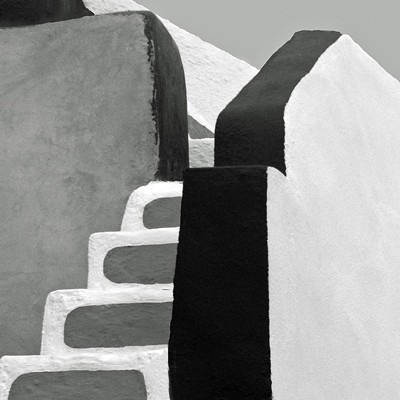 Due to Neuberger's manipulations, two digital images of Manhattan scenes, created about a decade ago, appear to be much older. In "Trinity Church," the iconic steeple is seen between tall buildings that dissolve into the sky. The gritty quality of the images was achieved through Photoshop. "The irony is that when I worked at Kodak with film, the big thing was to reduce grain," Neuberger says. "And here, I deliberately put in grain because I wanted it to look old."

Perhaps due to his long career in the darkroom, Neuberger still marvels over the ease with which once "very involved" photo manipulation processes are replicated on the computer. "Once I discovered digital, I said, 'Hey, I can sit down at the computer and play,'" he says. "I'm not very good at Photoshop, but it feels god-like, you know?"

Two binders chock full of Neuberger's prints reveal just how diverse his oeuvre is. Many images were taken during travels in Paris, New York, Quebec, and Israel, among many other places. Neuberger shoots whatever attracts him — monuments, people lounging in parks, age-stained and graffiti covered walls in old-city alleyways, rain soaked tropical foliage, an elderly couple silhouetted and supporting one another while walking under a bridge.

One particularly lovely image of sheets hung up to dry, titled "Three Sheets to the Wind," was taken on Monhegan Island, off the coast of Maine, during a master class in color photography — before Neuberger's digital tinkering began. At first glance, the pristine sheets, clothespins, line, and sky appear to form a fairly monochrome photo, but subtle green and yellow light from the grass and sky are reflected amid the gently draped folds. A sense of perfect peace emanates from the work.

Looking back, Neuberger says, "I was lucky enough to have the luxury of having a salary from Kodak, I didn't depend on photography for a living, so I could do whatever I wanted. If people liked it, okay, if people didn't like it, okay." He considers himself fortunate that he's been able to remain true to the pursuit of what interested him. "I'm having fun," he says. That's my goal."