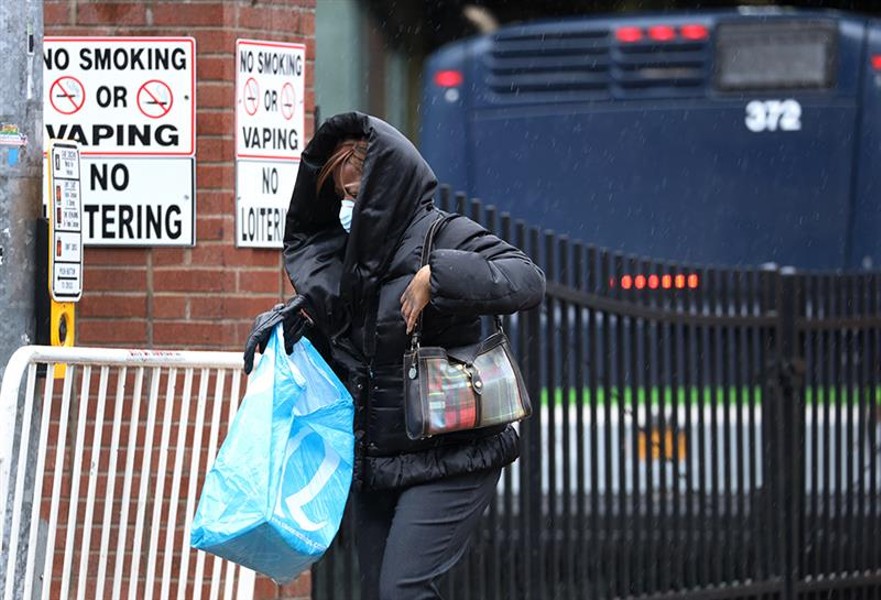 PHOTO BY MAX SCHULTE A woman exits her bus outside the Transit Center. The Regional Transit Service is urging riders to avoid taking the bus if they can.
The morning rush-hour bus from Webster to downtown Rochester was running mostly empty the other day, and that was just fine by Tracy Wyatt, one of the handful of passengers.

“You see people on the bus coughing without covering their mouths,” said Wyatt, who waited for a bus home at the Transit Center that afternoon wearing a makeshift mask she fashioned out of a scarf. “It’s a little frightening.”

The scarcity of passengers was also fine by the Regional Transit Service and its parent agency, the Rochester-Genesee Regional Transportation Authority, which is urging customers who can to avoid its services.

“Stay home. Stop the spread. Use public transit for essential trips only. #FlattenTheCurve,” the agency tweeted on Monday. Signs with a similar message are posted around the Transit Center.

“We’re trying to get our ridership down as much as possible right now,” said Bill Carpenter, the chief executive officer at RGRTA.

Typically, public transit agencies celebrate ridership gains rather than declines. But the coronavirus pandemic and the warnings for people to practice social distancing has turned that logic on its head.

Keeping most RTS passengers at bay hasn’t been difficult.

Fear and state orders for non-essential workers to stay home has many regular passengers abandoning the bus to protect themselves from the virus, which as of Tuesday had infected 95 people in Monroe County and killed three.

“A bus is kind of like a tomb,” said Kevin Kenyatta Watson, 60, of Rochester, who had taken a bus downtown for an appointment. “When you pick up a person, they’re in that tomb with you and you don’t know what someone’s bringing on the bus.”

Ridership in Rochester has been in an unprecedented freefall, as it has in all cities with mass transit services.

On Monday, March 16, the first day state restrictions on public gatherings took effect, RTS ridership dropped 22 percent compared with an average weekday, according to RGRTA. The next day, after the state had closed restaurants and other businesses, ridership fell 37 percent.

By the end of the week it had plummeted 47 percent. On Monday, it stood at 53 percent, or roughly 20,900 riders, according to the agency.

Thus far, RTS has not reduced its regular bus service.  Carpenter has emphasized that it is important to keep the system operating for those who need it.

To that end, the agency waived fares through at least April 19, but also implemented safety measures that require passengers to board, disembark, and sit at the rear of the bus, away from the operator.

Carpenter pointed to RGRTA data showing that disembarkments at bus stops near grocery stores and pharmacies, while lower than normal, are higher than the overall average ridership, suggesting that people who are dependent on bus service are relying on it to get to essential retail outlets.

"We can kind of see where people are going," Carpenter said.

The situation at RGRTA is not as dire, in part because the agency is less dependent on fares, which make up about 10 percent of the revenue in its $101 million operating budget. Most of RGRTA’s revenue comes from dedicated state aid ($45 million) and federal funding ($12 million).

Whereas many transit agencies rely on sales tax revenue, which is expected to take a hit given the health crisis, RGRTA depends on mortgage recording taxes ($11 million).

Even with the crisis, the agency is projected to finish its fiscal year, which ends March 31, with a surplus.

Still, RGRTA's commitment to waive RTS fares for the next month will add up. In normal times, fares generate about $800,000 a month in revenue. With ridership expected to stay low for the duration of the pandemic, which is expected to last longer than a month, the losses could be steeper.

“If it lasts a couple of weeks, we’ll be in good shape,” Carpenter said. “If it goes two, three, four months and people say, ‘I don’t want to ride the bus anymore because I’m too close to people,’ that’s where the crystal ball is foggy.”