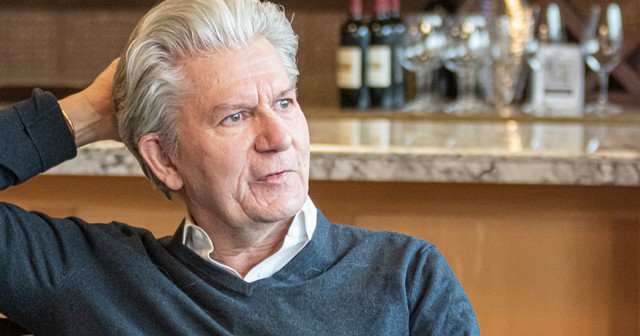 Andreas Delfs, the seasoned maestro who the Rochester Philharmonic Orchestra named Tuesday as its new music director, is a conventional choice to lead the organization into its centennial year. But there will be something unconventional waiting in the wings of each concert.

“After a long performance, a beer very much revitalizes and re-energizes me,” he said. “I normally have a deal with the stagehand to have one ready for me right when I come offstage. I haven’t established that rapport here yet.”

Delfs, 61, leaned back in his chair as he spoke over coffee  in the Strathallan Hotel bar, a knee resting on a table, a blue sweater over a dress shirt with French cuffs, projecting an air of casual refinement and the confidence of a conductor at a point in his career at which, as he put it, he has nothing to prove to himself or others.

Born in Germany and educated at Juilliard, Delfs studied under such famed conductors as Christoph von Dohnányi, Lorin Maazel, and Dennis Russell Davies, served as music director of the esteemed European opera companies Hannover State Opera and Bern Opera, and conducted the London Philharmonic Orchestra, Berlin Radio Symphony Orchestra, and the Netherlands Philharmonic Orchestra, among others.

He has also enjoyed sustained success in North America, with a fruitful tenure as music director of the Milwaukee Symphony Orchestra from 1997 through 2009, during which time the symphony performed in Havana, marking the first visit to Cuba by an American orchestra in 37 years. By that time, he had also made his conducting debut at Carnegie Hall. 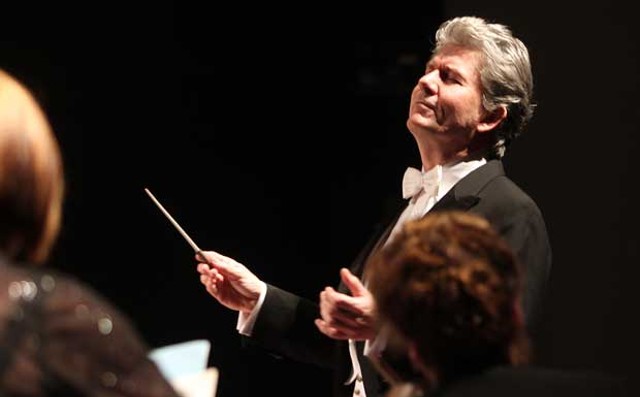 His appointment in Milwaukee also sparked a turnaround for the orchestra there. Once reportedly accustomed to a few sellout audiences a year, the orchestra reportedly sold out 30 shows within a year of his arrival.

Now in Rochester, he succeeds the Pittsford native Ward Stare, who at age 32 in 2014 became the RPO’s youngest director ever in its nearly 100-year history. Stare announced his intention to step down in 2021 two years ago.

Delfs has a history in town. In 1994, he made his debut with the RPO as a guest conductor, performing what is arguably history’s most famous classical composition — Beethoven’s Fifth Symphony.

Since that collaboration, Delfs has led the orchestra on several occasions. Even with his familiarity with the ensemble, he said he is hesitant to make drastic changes swiftly.

“The important thing is for a new music director not to come in with a sledgehammer and say, ‘Everything has to be different now,’ but first say, ‘Okay, first season, we do a little bit careful, a little bit conservative maybe,’” Delfs said. “Because I need to get to know this community, and the musicians, too. As you know, I’ve been here many times, but this is a different thing now.”

The appointment of Delfs is a conservative move by the notoriously hidebound RPO, at a time when the nation and its cultural organizations are reassessing their commitment to addressing issues of racial and gender inequality.

According to a 2016 report by the League of American Orchestras, of which the RPO is a member, just 21 percent of conductors in the United States are people of color. Among music directors, the statistics were roughly the same, with 22 percent of people of color holding the post. The gap between male and female conductors was at a similar ratio, with men outnumbering women four to one, while the gender disparity among music directors was at 90 percent male.

Ingrid Stanlis, who was the RPO’s board chairperson from 2017 to 2019, led the search committee for the new music director. Though she helped to determine a short list of candidates; the final decision had not been made before her tenure ended.

Seeing the search through were Betsy Rice, a current board member, and Rebecca Gilbert, the RPO's principal flutist.

“The search led us to an exceptional musician and artistic leader, one who is well-known to our musicians and to Rochester audiences through more than 25 years of guest conducting here,” said Ross Lanzafame, the RPO's current board chairperson.

Stanlis said the committee considered what she called “a very broad swath” of candidates, including several women. But, she added, none of the women the board considered expressed interest. She recalled that Delfs was a leading candidate.

“Mr. Delfs rose to the top quickly, in terms of what is the first order of business with a music director, which is superb musicianship, leadership abilities, the ability to pull a community together, and have it become enthusiastic — if it’s not already — about its local orchestra,” Stanlis said. “He had all the qualities in that respect.”

She said racial diversity is scarce among music directors and conductors, in part because honing their craft takes years and access to opportunities not historically afforded to people of color.

“It’s not easy to find either musicians or music directors — in the classical world — of color, in particular,” she said. “And I think we need to understand that in order to have people become classical musicians and potentially music directors, they need to start early in life.

“Music education is so critical to developing the next generation of musicians, and to the extent that our schools and our civic organizations have neglected early music education, we’re seeing the results of that now.”

Delfs acknowledged that the musicians typically hired by orchestras do not mirror the diversity of the community for which they perform. He said that he and the RPO have begun to discuss how to combat racial inequity, and that the issue must be addressed long before musicians get to the conservatory level.

“I would love the Rochester Philharmonic to be a banner carrier for this approach,” Delfs said. “Orchestras have to do much more to help young people, children that grew up in a social environment where classical music is not natural, but they might be musically very talented. And we have the school system to help us to find them. And that’s where I think an orchestra needs to foster more.”

Delfs suggested a program in which each RPO musician gives free music lessons to a local student in need.

In the short term, Delfs’s programmatic decisions for the 2021-22 season — which is expected to be released in full on Feb. 4 — suggest a subtle move toward more equitable representation in terms of gender and race, with regard to guest performers and featured living composers. Of the guest soloists to perform in the upcoming season, half of them are women.

Musicians of color to appear with the RPO include conductors Joseph Young and Lina González-Granados (in their debuts with the ensemble), soprano Nicole Cabell, and pianist Awadagin Pratt.

All of the contemporary works to be presented by the orchestra were written by female composers or composers of color. These include world premiere concerti by Roberto Sierra, a longtime collaborator with Delfs, and violinist-composer Jessie Montgomery.

“Montgomery is certainly somebody I want to watch and prepare an inroad with the audience and the orchestra to appreciate her music,” Delfs said.

The conductor said he is also excited to introduce Rochester audiences to the music of Sarah Kirkland Snider, whose orchestral song cycles draw from pop and rock idioms and often conjure dream-like dystopias.

Though Snider’s piece “Something for the Dark” is a 15- to 20-minute instrumental work, Delfs hopes to commission a longer composition from her in the future.

“We know that all good music comes from the natural feeling of melody and the human voice,” he said. “And Sarah is wonderful with that. She writes for voices like no other composer of her generation right now.”

The new music director’s affinity for vocal music by American composers extends well beyond contemporary compositions, and classical music, for that matter.

“I love American vocal music very much,” said Delfs, who has kept a home just outside of Ithaca for more than 26 years. “In my house, you hear very little classical music because that’s my job. That stays out of the house. You hear a lot of Ella Fitzgerald doing the Cole Porter songbook, and things like that.”

Delfs also described himself as a “big opera fan” with a deep and abiding connection to vocal music — one that stretches back to his childhood in Flensburg, Germany, where he joined the roster of the Flensburg Municipal Theater as a conductor when he was 17.

But it was when he was 8 that he saw his first opera, “Hansel and Gretel,” and it stoked something inside him.

“We all have this one time in our lives where something that later becomes our great passion strikes us like lightning,” he said. “And that was it for me.”