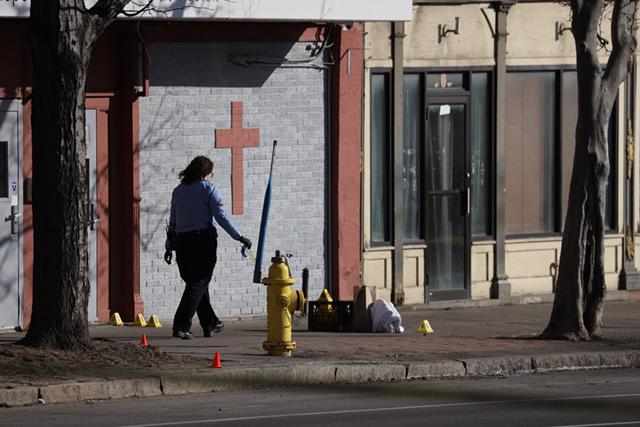 A man was shot and killed by police early Wednesday morning after he allegedly threatened officers with a knife near the Open Door Mission, according to the Rochester Police Department.

Police responded to the homeless shelter just before 3 a.m. after receiving a report that a man had taken a large knife from inside the Open Door Mission and left the building, Capt. Mark Mura said. A statement from the Open Door Mission refers to the man as one of their guests, indicating that he had been staying there.

Mura said that when police arrived about 5 minutes later, they located the man outside. He was cutting himself with the knife, and then said he wanted to kill police, Mura added.

According to Mura, officers went to get a Taser and at around the same time the man with the knife moved toward police. Mura said an officer fired at least one shot at the man.

That man, who has not been identified yet, was brought to the hospital where he died about an hour later.

Mura was asked if anyone from the county’s FIT (Forensic Intervention Team) was called, but he said the whole incident happened within about 5 minutes.

Police are still looking for any possible witnesses to the incident. West Main Street near the Open Door Mission may be closed to traffic for several hours due to the investigation.

The executive director of the Open Door Mission, Anna Valeria-Iseman released this statement on Wednesday:

“Our hearts are heavy at the Open Door Mission regarding the incident that occurred early this morning involving the death of one of our guests. We are praying for our guest, their loved ones, and the Rochester Police Department officers involved in this incident. As this is an ongoing police investigation, we can have no further comment at this time.”

Police Accountability Board Chair Shani Wilson released this statement on the RPD shooting:

“This morning, the Police Accountability Board learned of media reports that a Rochester Police Department officer shot and killed a man at the Open Door Mission,” said Chair Shani Wilson. “I asked RPD to provide the PAB with all relevant body-worn camera footage of this incident. I also asked RPD to immediately release that footage to the public. I have not received a response to either of my requests.

“The PAB cannot comment on what we have not seen. However, this latest incident may raise the same questions our community has been asking for months about officer training, RPD culture, and the Person in Crisis Team. The PAB is searching for answers to these pressing questions through our open investigation into the policies, practices, procedures, and training involved in the Harris Street and Portland Avenue pepper-spraying incidents. This latest incident spotlights the need for immediate attention to our repeated, unfulfilled requests for information. The community deserves a full and transparent review of all these incidents.”