PHOTO BY MAX SCHULTE A protester faces off with a line of police at City Hall on Sept. 16, 2020.
The Rochester Police Department racked up nearly $1.4 million in overtime hours preparing for and responding to demonstrations related to the city’s handling of the death of Daniel Prude over the last four weeks.

That figure was presented by the Police Department to members of City Council on Monday and represented RPD overtime pay during the four-week span of Aug. 31 and Sept. 27.

The bulk of the costs, however, were assumed in the first two weeks of the month, when the RPD spent just over $1 million on 15,529 overtime hours, at a rate of roughly $67 per hour, according to the department. 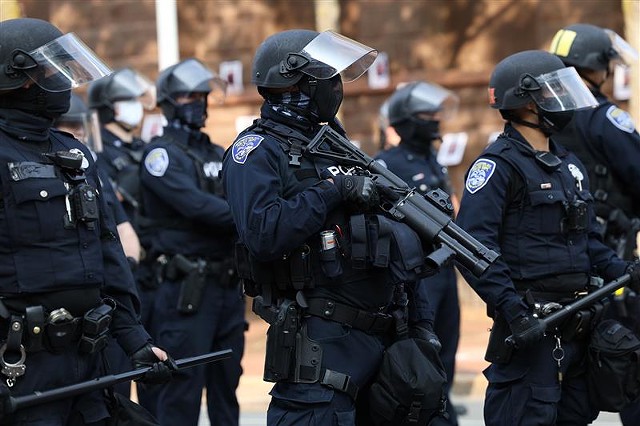 The numbers are staggering by any measure. But to put them in perspective, consider that the RPD has reportedly spent about $7 million annually on overtime over the last few years.

“This was a year that a lot of us on Council had really high hopes that the overtime expenses would go down considerably, because in the past overtime has depended on special events that were happening,” said Councilmember Mitch Gruber. “But based on the numbers we just saw, it doesn’t look like that’s going to happen. It’s troubling, and it’s problematic.”

In 2020 alone, the department estimated it has spent almost $2 million — $1,975,089 to be exact — on coverage for Black Lives Matter-related demonstrations, beginning in the days leading up to the first high-profile protest on May 30.

“It’s an unfortunate expense that we have to pay,” said Councilmember Jose Peo. “This money could have been used in a much better way had we not had the protests continually going.”

This fiscal year, which began July 1,  the city reduced the RPD's overtime budget by about $250,000, most of it related to special event support. Peo said the spike in protest-related expenses will likely have a fiscal impact over the long term.

“It’s going to have an impact for years,” Peo said. “We were already borrowing money just to meet budget, and to add an additional $2 million dollars, that would impact anybody.”

"I think we need to understand that we really need to tighten our belts," Gruber said. "Obviously, that includes in the way that overtime hours are allotted."