Roux turns to the French classics 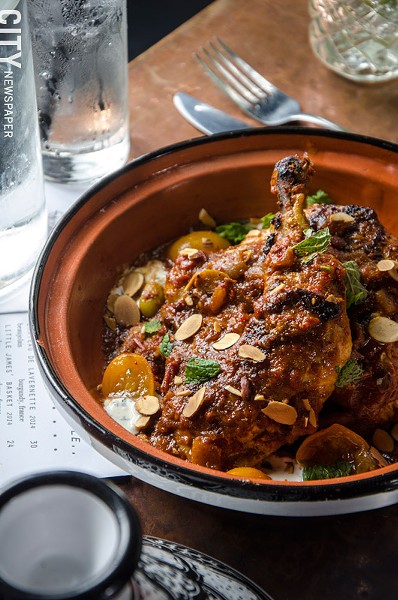 PHOTO BY MARK CHAMBERLIN Roux takes a classical approach to French cuisine, with dishes like the chicken tagine.

PHOTO BY MARK CHAMBERLIN The bouillabaise

Although the foundations of modern restaurant cooking — especially in the fine dining world — rely on French techniques, restaurants that focus heavily on that style are a rarity in Rochester. And I tend to lack interest in a lot of typical French bistro-like fare; the idea of encroaching on new territory and exploring less celebrated or mainstream food is more appealing to me. Still, the idea of revisiting the classics was alluring as my wife and I sat down to our meals at Roux.

We started with lighter fare and stuck to a group of dishes that were all versions of classics, although I wasn't aware of that when we ordered. The first two dishes — the escargot ($10) and the nicoise salad ($14) — were straightforward versions of familiar dishes. The six snails were cooked in an interesting tray that provided for individual pools of garlic and parsley butter for each piece. It was a nice presentation, although the pieces were slightly overcooked. The niçoise salad was conscientiously constructed using imported canned Italian tuna, boiled egg, potato, fennel, radish, and olives separated on the plate surrounding a pile of the house style greens and dressing.

The surprising dish for me was the tarte flambée ($12), which turned out to be a flatbread like dish that has roots in the Alsace region of northeastern France. The bread was topped with caramelized shallots, lardon (bacon), and fromage blanc. But since I was unaware of the dish's history, the description on the menu threw me off base: I was expecting more of a pie-like cheese tart." The dish was enjoyable enough, but it was one of those times when a few extra words of description on the menu could have added clarity; I'm not sure I would have ordered it after seeing what was in front of me.

The standout of the entrées was the bouillabaise ($28), a comforting Provençal seafood stew that featured halibut, mussels, and shrimp in an aromatic fennel tomato base. What struck me was that each piece of seafood was cooked perfectly, which is difficult considering each has a different cook time. The mussels had almost no chew, the halibut was just barely cooked, and the shrimp popped with individual seasoning. This was an appreciated attention to detail and added some refinement to the rustic nature of the dish. A saffron rouille added plenty of richness after being mixed into the dish, although the aroma of the saffron got lost among the other more potent ingredients. The freshly baked baguette was a nice touch and came in handy to wipe up the rest of the delectable broth.

The chicken tagine ($22) featured four pieces of chicken served with toasted almonds, Moroccan spiced sauce, mint creme fraîche, couscous, and picholine olives. The chicken was fall-off-the-bone tender from the braise and showed nice skin sear, and the olives and almonds were critical elements both for flavor and textural contrast. The Forestier ($14) was a vegetarian Croque Monsieur variant that replaced the ham with sauteed wild mushrooms. The herbal kick from the thyme and the slight funk from the gruyere mingled well with the earthy mushrooms.

The special burger ($20) we ordered on our second visit sounded like a piece of extravagance: the patty would be topped with foie gras, frisee, and a truffle oil vinaigrette. Unfortunately what we ended up with was a burger that was cooked over the requested medium rare, and topped with a small disc of foie gras that was completely obfuscated by the overwhelming aromas of truffle oil. Simplifying the toppings by removing the truffle oil and letting the foie gras shine in a different way — like as a sauce — may have made the burger more successful. Thankfully the skinny cut fries were spot on with its crispy exterior and tender interior juxtaposition.

There were three dessert options and we decided on a slice of dark, dense flourless chocolate cake ($7) accented with a simple cream and a hazelnut brittle. It was a nice basic dish with enough chocolate to make my wife smile.

When it comes to absinthe, I'm not sure any bar in Rochester can compete with Roux's selections. Not only can you choose between classic anise-heavy options, like the Vieux Pontarlier ($9) that I tried, and more modern creations like the St. George Verte ($8), but you can also go straight or try one of four different dilution styles with added sweetness or flavors. Plenty of ways to experience and learn about a spirit that until around 2007 was mostly absent here in the US.