2018 was a year of division, anger, and unrest no matter where you looked. It was a long, bitter haul, and more than ever, movies were the tether that kept me sane. Sure it's my job, but going to the movies provided me a chance to laugh, cry, help make sense of the world at large, or simply escape for a couple hours. And all of it was deeply necessary. But in the end, these are the movies that most stuck with me over the past 12 months. Take the order with a grain of salt. Just know that every film mentioned here is absolutely worthy of your time.

1. "First Reformed": No other movie best captured the overall mood of 2018 better than Paul Schrader's dark tale of despair and hope, about a priest (Ethan Hawke, in a career best performance) grappling with his faith, and trying desperately to fumble his way toward some sort of grace. 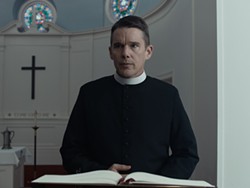 2. "If Beale Street Could Talk": After topping my list with "Moonlight" back in 2016, Barry Jenkins is back with a gorgeous adaptation of James Baldwin's novel, at once a lush, melancholy love story and a clear-eyed look at the failings of our justice system.

3. "Roma": Alfonso Cuarón's vibrant and intimate autobiography follows a tumultuous year in the lives of a bourgeois Mexican family and the live-in maid (Yalitza Aparicio, in a phenomenal debut) they love, depend on, and completely overlook.

4. "The Favourite": Olivia Colman, Emma Stone, and Rachel Weisz deliver a trio of excellent performances as three ambitious and self-centered women jockeying for power in this deliciously wicked costume drama from Yorgos Lanthimos.

5. "Paddington 2": A warm, gentle hug of a movie, returning director Paul King crammed so much heart and imagination into this whimsical sequel, continuing the story of the kind-hearted, marmalade-loving bear from darkest Peru. Remember, "If you're kind and polite, the world will be right."

6. "Minding the Gap": An extraordinary documentary from filmmaker Bing Liu, about his group of childhood friends skateboarding and growing up in the rust belt town of Rockford, Illinois. As we follow the boys' slow journey toward manhood, Liu's film gradually reveals itself to be about so much more than skateboarding.

7. "Leave No Trace": Debra Granik has a gift for casting talented actresses in their breakthrough role, first with Vera Farmiga with "Down to the Bone," then Jennifer Lawrence in "Winter's Bone." Hopefully Thomasin McKenzie will follow suit after providing the emotional anchor of this poignant story about a father and daughter living on the fringes of society, then suddenly forced to forge a new path.

8. "Eighth Grade": Built on a fearless performance by newcomer Elsie Fisher, Bo Burnham's painfully funny coming-of-age story about an introverted young girl navigating her last week of middle school made for an often agonizing viewing experience. Thankfully the director's empathy and compassion for his characters kept it all from becoming too much to bear.

9. "Lean on Pete": Andrew Haigh's tale of a boy and his horse is a devastating, but ultimately hopeful story of redemption, family, and the danger of living without a system of a support in this country. Man, this movie made me sob.

10. "Sorry to Bother You": No other movie more consistently surprised me this year than Boots Riley's surreal, anti-capitalist satire, about an ambitious telemarketer's his rise through the corporate ranks. A messy, fascinating, and hilarious look at art, commerce, race, and economic inequality in America.

11. "Black Panther": Ryan Coogler's superhero blockbuster was a true cultural phenomenon; a thrilling, fully-realized action-adventure that proved a comic book movie can be just as relevant and politically-minded as any prestige drama.

12. "Support the Girls": Regina Hall gets the role of a lifetime as the harried manager of a Hooters-esque sports bar, trying to keep her staff in line and her life from imploding over the course of one very long day.

13. "Can You Ever Forgive Me?": Marielle Heller's acerbic comedy provides a juicy role for star Melissa McCarthy, as author turned literary forger Lee Israel. A misanthropic delight, with equally great work from Richard E. Grant as Israel's partner in crime.

14. "Spider-Man: Into the Spiderverse": Stunningly stylist, emotional, and funny, there have been plenty of Spider-Man movies over the years, but never one quite like this.

15. "Revenge": Updating that most disreputable genre — the rape revenge movie — director Coralie Fargeat crafts a visceral, gory, and ferociously entertaining horror-thriller about a young woman who wreaks bloody vengeance on the men who assaulted her and left her for dead, and injects it with a razor-sharp feminist edge.