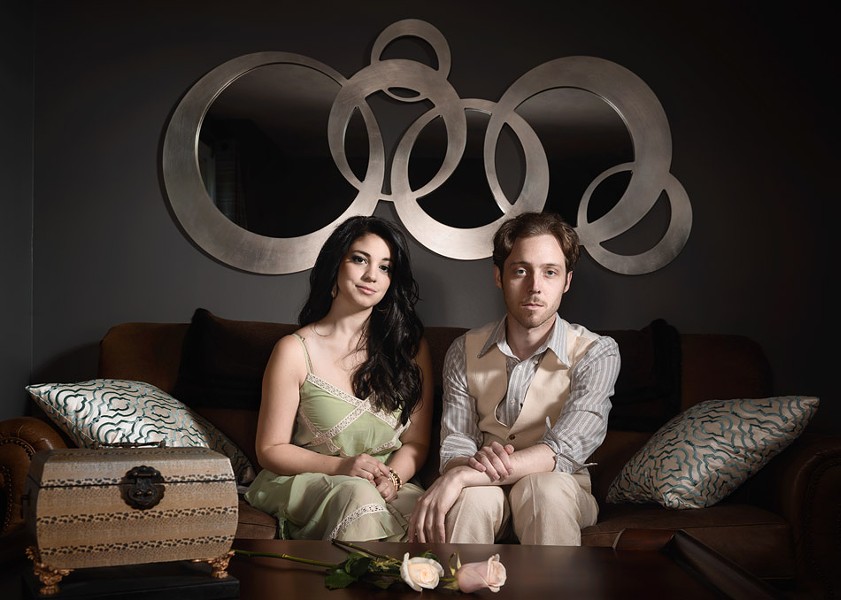 Band names can often be misleading and superfluous. And a lot of time is spent in creating a moniker, a title that frequently has nothing to do with the band that puts it on like an ill-fitting turtleneck. But when Tinted Image abandoned its name for Roses & Revolutions, it made perfect sense. Here is a duo that is steeped in the florid and the epic, the gentle and the unwavering, the beautiful and the fierce.

At the heart of Roses & Revolutions is a mere duo — guitarist Matt Merritt and vocalist Alyssa Coco — bristling in the atmosphere and orchestration. The bands new self-titled EP — the follow up to its 2012 EP "Earth & Everything" — flows full of sunrise and promise, and a smoothness that never gets too sugary or dramatic. The EP is sort of a young adult cotemporary sound, smart with some sass and brass. And though its anchored in a gentle simplicity, it's still big and beautiful. You can blame Coco's perfect voice, you can blame Merritt's introspective guitar work, and you can blame yourself if you don't check Roses & Revolutions out, pronto.

Merritt and Coco stopped by to chat about EP versus LP, writing songs and butting heads, and the duo's scratch-off addiction. An edited transcript follows.

CITY: What's with everyone releasing EPs as opposed to LPs? Is it easier?

Matt Merrit: Yeah, it's easier for us as a newer group to get stuff out quicker. I like it too, because it gives each song attention. If you have an album, stuff can kinda get lost in the shuffle. Also I think when you're writing, it's a quicker turnaround time to see what fans react to. Sometimes you commit a couple years to doing a full album and all of a sudden halfway through it you might decide you want to try different styles. For more-established bands it may make more sense to do a full album, for us it's about getting music out as quickly as possible to see how people react to it.

Have you ever released something too early or too quickly?

Alyssa Coco: I wish. I wish we turned around stuff too quickly. Unfortunately, we don't have that problem yet. But we just released this album and we're already in the studio working on new stuff.

Is the new stuff similar to the EP, seeing as how you're working on the heels of its release?

Coco: It's along the same lines as the stuff we just released.

Merrit: Some of the material we just released was recorded last summer. What we're working on now, it's in the same ballpark. But we had a lot of firsts on this EP, like experimenting with male harmonies and cello. And for instance, we're doing a song called "Bonnie and Clyde" and we brought in a whole marching band with drums, but it's still kinda in the same vein.

Did your name change facilitate a musical change in the group?

Coco: Actually, it's changed a lot. It's a fresh new name, a fresh new everything. Matt and I wrote pretty much everything before, but now instead of having five voices saying "This should go here, this should go there," now it's just the two of us, and it's nice. But we have our differences.

When the two of you butt heads does that make for better songs?

Merritt: Even when we do butt heads, it's to the smallest degree possible. Tinted Image originally was an instrumental funk band, Alyssa came in and started singing, and for booking purposes we kept the name. We officially had something like five members in the group. Alyssa and I were writing every song, but we'd have to go to each member, get their approval, their input, then record it. With Roses & Revolutions it's the same music now and we still have some of the same people playing on it, we just don't need their approval. There are no hard feelings.

How does Roses & Revolutions write?

Coco: It varies, but it's always a 50-50 collaboration, really

Coco: For me, I sit at the piano or with a guitar, pluck out notes and just start singing a melody.

Merritt: When I write, it's always her voice in my head. And that's the cool thing, to know it'll sound 100 times better than when I demo'd it because her voice is just impeccable. I'm really lucky to be able to write for it.

What aren't you two good at? What do you struggle with?

Merritt: We are just a little timid sometimes.

So no bad habits, no crime sprees, no weekends in jail... no vices whatsoever?

Merritt: We buy a lot of lottery tickets.

Coco: Yeah, and we eat a lot of pizza.