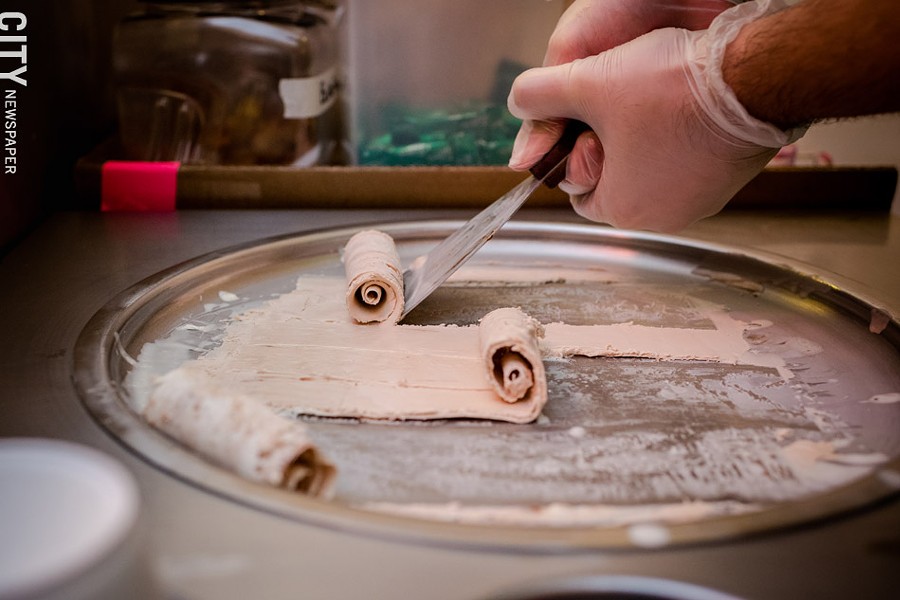 My first question to John Syouthoum, the owner of Roll'n Yen Thai Fried Ice Cream (656 South Avenue), is "Why is it called 'fried ice cream' when it's not fried?" The house-made ice cream is spread out on a flat surface and then scraped into rolls and placed in a cup — there isn't a fryer in sight.

"Our cold plate is actually an anti-griddle," he explains. "Instead of getting hot, it freezes. The reason we call it Thai fried ice cream is because Thai people stir-fry everything. We're basically stir-frying your ice cream."

A machinist by trade, Syouthoum was inspired to replicate the Thai treat in Rochester after visiting Vientiane, Laos, where his family hails from. He researched the correct way to make it, and modified it slightly — the dessert is traditionally made with frozen yogurt instead of ice cream. At Roll'n Yen, ice cream is spread out flat on the cold surface and then a variety of toppings are added in, like fresh fruit, cheesecake bites, or Oreo pieces. The ice cream is then scraped into rolls and topped with a drizzle of sauce or sprinkles and whipped cream — all for $5.55.

The ice cream is made in house and comes in the traditional vanilla and chocolate as well as a green tea flavor. And the shop recently introduced a Thai tea flavor, which is typically made using a black or red Thai tea, with either milk and sugar or condensed milk added. Roll'n Yen is also working on a pumpkin spice ice cream for the fall.

This is a family-friendly business — it is ice cream we're talking about after all. On any day in the shop you'll find some of Syouthoum's seven children, ranging in ages from three to 18, hanging out. "I didn't open this for myself, I opened this for the kids," Syouthoum says. "They like the attention and the interaction with the customer and the other kids."

With seven kids, a job at night, and opening the store everyday, I ask Syouthoum when he finds time to sleep. "Sleep?" he says with a laugh. "Who sleeps these days?"

A new vegan festival will debut this weekend in Martin Luther King Jr. Park at Manhattan Square (353 Court Street). Rochester VegFest will feature around 30 vendors, including food from local vegan restaurants and chefs, free yoga, speakers, and a screening of the documentary "What the Health." Saturday, September 16, 10 a.m. to 6 p.m. Entrance is a suggested donation of $3-$5. rocvegfest.org for more information.

Foodlink's Festival of Food will take place Monday, September 18, from 6 p.m. to 9 p.m., at the Rochester Public Market (280 North Union Street). The fundraiser features more than 100 food, wine, and beer vendors offering tastings. Tickets are $50 for general admission and $75 for a VIP night that includes a pre-event happy hour at Cure. Tickets can be purchased through foodlinkny.org.

Muller's Cider House (1344 University Avenue) will host a First Day of Fall Celebration event on Friday, September 22, with fall-themed food and drink specials. You can find Muller's on Facebook at facebook.com/MullersCiderHouse. Also in cider news, Embark Craft Ciderworks Taproom (6895 Lake Avenue, Williamson) will host Cider Fest 2017 on Friday, September 29, from 6 p.m. to 10 p.m. Embark, BlackBird, Rootstock, Original Stump Blowers, and others will be pouring samples, and there will be music from The Transport. Tickets are $25 and can be purchased at lagonerfarms.com/store/cider-fest-2017.

Genesee Brew House (25 Cataract Street) will host ROCtoberfest on Saturday, September 23, from 3 p.m. to 8 p.m. The German-themed party will take place under a tent in the parking lot of the Genesee Brew House and feature food, beer, and live music. The event is 21 and over and will be held rain or shine with a $5 entrance fee. More information at geneseebeer.com/brewhouse.

Jeremiah's Tavern has opened a Henrietta location at 1175 Jefferson Road.

Havana Cabana (289 Alexander Street) has closed. Any gift certificates for the restaurant can be honored at Seven Seas Tavern (58 University Avenue).