For me, the winter months have always been a time for hibernation, not exertion — I swear it's not lazy, it's just being sensible about surviving these long Rochester winters. All due respect to those participating in activities like the Polar Plunge, but I value my warmth and comfort a little too much to risk hypothermia.

This winter, I'm sticking to my idea of the perfect winter-time activity: game nights. I'll get to stay snuggly, keep my mind active, and spend quality time with friends — which is a pretty great resolution if you ask me. If you're a fan of tabletop games, Rochester offers a variety of possibilities, from organized groups to game shops. The city even has a few talented game creators in the area, and supporting local artists is always a good idea.

One such creator is Nicholas Yu, and his company Zucchini People Games. Yu created Hero Brigade, a deck-building, two-player card game which places players in head-to-head combat as you put together a team of heroes or villains (depending on which way your personal alignment naturally leads you) and battle it out until your opponent has been vanquished. A fast-paced, fairly easy-to-learn game, Hero Brigade is currently available in most local gaming stores. Yu has a second game called Eternal Dynasty due for release sometime in February. A Risk-esque Euro-style game in which players take on the role of rulers of competing families in ancient China. Players gain power by spreading their military and political influence as they compete to gain control of the country.  You can find updates on both games at zucchinipeoplegames.com.

Also scheduled for release this year is Island Dice, from co-creators Jason Gough and Kevin Bolliger of Casual Dragon Games. A thematic dice game, players of Island Dice become explorers on an uncharted island. The object of the game is to maintain peace by befriending the natives, surviving the island's more dangerous features, and wiping out any opposing explorers. The game has a Kickstarter campaign last year, coming in just shy of its goal, earning 94 percent of its funding. There will be a new campaign starting this month, and its creators are confident they'll hit their goal this time around. Check the Kickstarter page to get in on the action, or visit casualdragongames.com

Rochester has a number of great locally-owned stores ready to supply you with all your gaming needs. Each has its own unique vibe, so everyone's bound to have a favorite.

Next up, The Game Gamut strictly carries tabletop games. Boasting a great selection, the store is distinctive for having a bright, family-friendly vibe — it feels like your new favorite toy store. Game Gamut has two locations: 10 Schoen Place in Pittsford, and the other in Victor, at 86 West Main Street. thegamegamut.com.

Boldo's Armory (891 Monroe Avenue) has more of a hardcore nerdy ambience that I enjoy, with that charmingly disheveled feel that I tend to associate with all of the best comic book shops. The store also has an extensive collection of D&D supplies. boldo.com.

Smaller, but no less essential is Pair-a-Dice Games in Village Gate (274 North Goodman Street). Its exceptionally knowledgeable staff and relaxed atmosphere make it a pleasure to shop at. pairadicegamesllc.com. 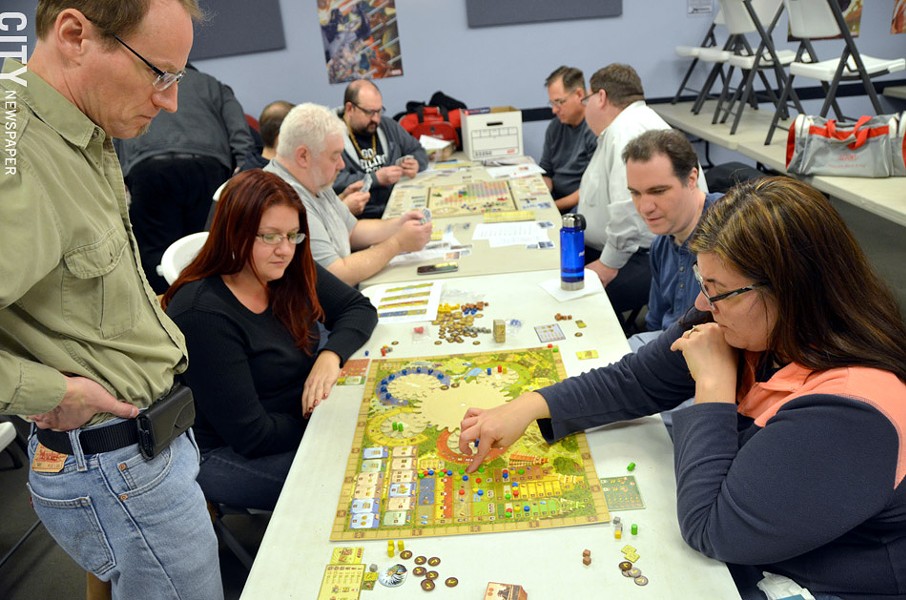 If you're looking to making your gaming a more social experience, Rochester is home to several gaming groups who meet regularly. Most are centered around Euro and Thematic-style games, and they're perfect for those looking to expand their gaming horizons and meet new people. Plus, gaming groups allow you to try out a variety of games without plunking down the big bucks to actually purchase them yourself — saving money is also a pretty great resolution to stick to. 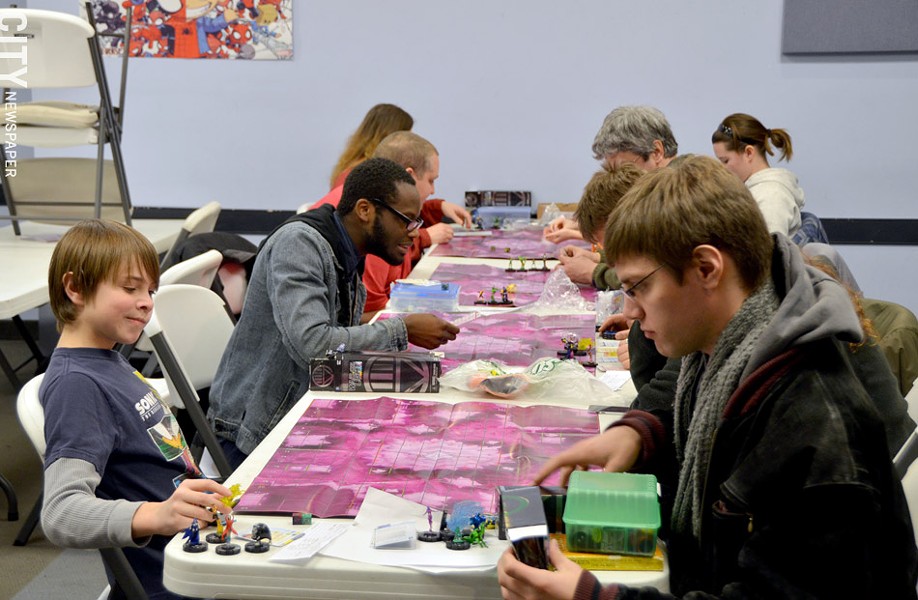 The Rochester Boardgaming Society is the most established of these groups, having existed for 14 years. The group meets at Millennium Games on the third Saturday of every month. The crowd is mixed (in terms of age and gender), friendly, and extremely welcoming. There were 30 or so people on the day I attended, though I was told that certain days can top out around 60 players, split into a smaller groups with about a dozen or so games going simultaneously. Check the meeting schedule and group announcements at frontiernet.net/~mark_gartland/RBS.

Sharing some overlap in members, Board Game Days are held at Millennium Games on Wednesdays throughout the day (from 10 a.m. to 10 p.m.). Several members made a point of stressing that they tend to play "higher-level" games, not the type you'd typically play with your 6-year-old cousin on Christmas Eve; so you'll want to leave your copy of Monopoly at home.

Finally, there's Rochester Game Nights, meeting every Saturday, as well as the first Thursday and third Tuesday of every month. The group's favored meeting places include Spot Coffee and Great Northern Pizza Kitchen on Monroe Avenue, and the attendees seemed to skew a little younger — the crowd on the night I stopped by appeared to be mostly college-aged. And maybe it was the cozy, dim lighting and the comforting presence of pizza, but the meeting had an appealing, low-key vibe. Rochester Game Nights do charge a small membership fee of $5 a year, but they're also sponsored by Game Gamut, so membership gets you a 15 percent discount on purchases made through the store. Find the group's schedule of upcoming meetings at meetup.com/Rochester-Game-Night.