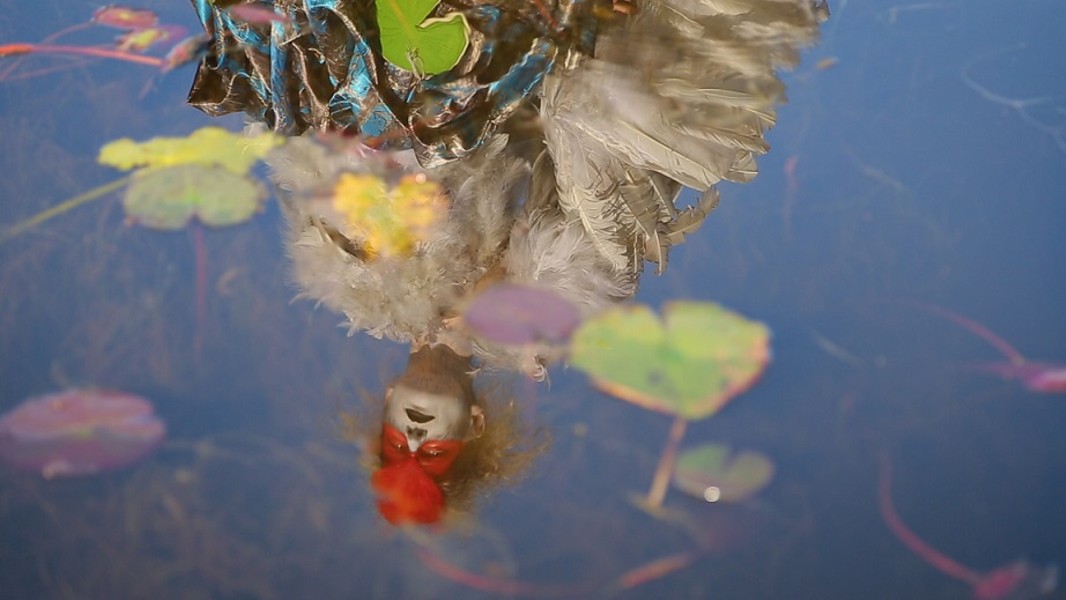 PHOTO PROVIDED A still from "Deer Queen," a short video piece by Brooke Thiele. The work and others are part of "Scenes of Place: Milwaukee," currently on view at Rochester Contemporary Art Center.

Rochester Contemporary Art Center recently redesigned the back area of the center, removing the circular chamber that dominated the back corner of the gallery and replacing it with a narrow, rectangular room that's been fashioned into a comfortable space for viewing media art. RoCo's executive director Bleu Cease says he envisions the space as a place to host "an occasional series of partnering with curators around the Great Lakes, specifically bringing programming of video art here."

Currently on view in the new space is "Scenes of Place: Milwaukee," a program of four short films curated by Milwaukee-based filmmaker and teacher Ben Balcom. He's also a co-founder and programmer of Microlights Cinema, a Milwaukee-based art space that has hosted dozens of contemporary film and video artists from around the world since 2013.

"They do a lot of cool programming and are certainly plugged into the video art community in Milwaukee and the region," Cease says.

The artists featured in "Scenes of Place" are based in Milwaukee but have diverse roots and artistic focuses. Created in 2018, the 12-minute film "1991" by filmmaker and poet Saif Alsaegh includes three environments: the semi-imaginary setting of a cabin where Alsaegh has a Facetime conversation with his mother, Bushra, an Iraqi asylum-seeker waiting for approval to immigrate to the US from Turkey; the virtual connection between mother and son, who haven't seen each other in years; and the landscape of memory, as Bushra recalls giving birth to her son in the chaos of the 1991 Gulf War.

Kym McDaniel's 2018 "Exit Strategy #3" is a 9-minute collection of images and recorded thoughts after a head injury, chronic pain, and fatigue brought her life to a halt and left her sleeping for days. The dreamy sequences are filled with self-aware statements that form a portrait of a person trying to gently but firmly proceed with her life. Also a choreographer, McDaniel's sharp attention to the body comes through clearly in this piece.

Another self-portrait work, Grace Mitchell's 2018 piece, "Magic Bath," reveals a long span of time compressed into 8-minutes. Created from a collection of footage from Mitchell's adolescence through adulthood, it blends recorded confessions, cellphone snapshots, and performances.

The shortest work in the bunch at six minutes, animator and performance artist Brooke Thiele's 2017 work "The Deer Queen" is a myth-y dip deep into Wisconsin's Northwoods. Set in a cabin-in-the-woods dreamscape, the work explores the power of the huntress archetype, death, and longing.

This program may evolve over the next three or four years, Cease says. "We don't have a firm horizon on it, but it's definitely something I want to commit to, to further connect Rochester to other Great Lakes art communities," he says. They'll continue bringing outside work to Rochester and may develop exchanges by sending the programs to those other Great Lakes cities as well. Next up in the screening space is "Eclipsing the Sun / a Biological Storm," a video installation by visual artist Todd McGrain and animator Fola Akinola, opening First Friday, February 1. In April the spot will host work by Alexis Gideon.