Massaoke is kind of like that cover band you always wish you had started. And with the London musicians performing in America for the first time ever on back-to-back nights at Parcel 5 as part of this year's Rochester Fringe Festival, you don't have to miss out. The premise is simple: Massaoke provides the electrifying live music, and the amped-up crowd takes the lead vocals, singalong-style with the lyrics projected on a screen for all to see.

The band — consisting of Mark Nilsson on keyboards, drummer Mat Morrisroe, guitarist Neil Winspear, Rye Eden on bass, and Ethan McClean serving as VJ — has recently released a Massaoke app on the Apple App Store and the Google Play Store that allows concertgoers to request certain songs in advance of the concerts. App users can make their requests in the main feed and use #rocfringe18.

A Massaoke concert combines the unpredictable, boozy energy of a karaoke club with the communal catharsis of an arena rock show. And with no pressure on any one person to take the mic, it quickly becomes all about the music.

The Beatles. Madonna. Queen. Britney Spears. Nirvana. Sia. The Killers. If it's a karaoke favorite, it's fair game for this stylistically versatile band. CITY reached across the Atlantic to talk with Nilsson and Morrisroe about what sets them apart from regular karaoke, the band's distinct connection with audiences, and the proper level of intoxication for Massaoke concertgoers. An edited version of the interview follows.

CITY: How did the idea for Massaoke come about?

Mark Nilsson: It was initially just an idea to do a singalong band show with printed song sheets. So initially, it was gigs in pub basements with printed sheets for each song, just on a very small scale.

Mat Morrisroe: We started out in 2011 in a little pub basement in London. It was actually on the day of the royal wedding. And we just started out, it was 60 friends in this tiny little basement in a pub, with the band playing some of the big anthems, and people literally with song sheets having a great old time. And yeah, it's grown to where we are now from that point.

Is the band at all a critique of karaoke, an attempt to improve on the form, or is it just a celebration?

Morrisroe: It is a celebration. It's kind of a very old-fashioned idea really, isn't it? Of people just getting together in a social environment and singing songs. What they used to do is they'd get around a piano, maybe in a bar, and they'd whack out a few anthems. And we just do a contemporary version of that.

However, I think as someone who does karaoke myself quite a lot, what I do quite like — the difference between what we do and normal karaoke is that with Massaoke, it's everyone singing together. So some people are quite nervous to sing and stand up in front of people. They don't really get that many chances to stand and be part of that sort of thing. So with Massaoke, everyone can sing together. It doesn't matter if you can sing or not because no one can really hear you in the crowds. It doesn't matter if you're trained or not. It doesn't really matter if you know the words or not, to be honest, because we're showing them to you. It's just a really nice, informal way for people to sing. It's not really a critique of karaoke, but it is a different take on it, yeah, definitely. 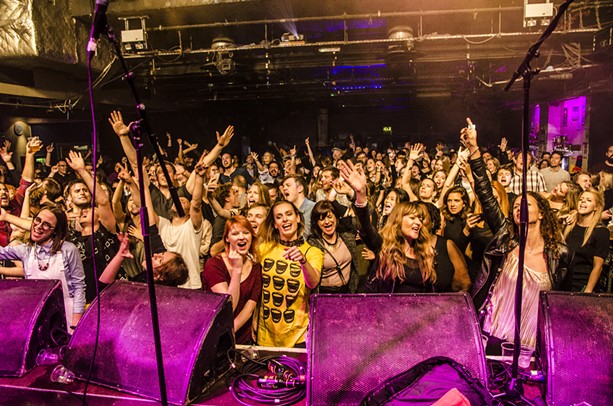 Karaoke is typically about individual performance and the showmanship of it. But because you don't have a lead vocalist per se, does it take the ego out of it for you onstage?

Nilsson: I think the spotlight's still quite on us. We really do like to put a show as much as we can. We wear spandex and sequins, and ham it up as much as possible. But it's done in a very fun way. It's definitely done with a kind of a wink and a nod. And it's really done to enhance the enjoyment of the people singing. So whilst we're mincing around and showing off like nobody's business, it's kind of done without that sense of, "Hey look at me, I'm wonderful," and more with a sense of, "Let's have fun together and enjoy this awesome guitar solo while I play it behind the back of my head."

Do you find that the camaraderie between you and the audience is different from just another rock show?

Morrisroe: Absolutely, yes. We've all been in various different bands previously in our careers. And I know from my experience as a drummer in various rock and indie bands, it's a much more enjoyable experience. There is a much stronger connection between us and the audience than there would be, maybe if you're there being quite serious about very serious songs that you take very seriously. People are much more alive and they're much more open. And so yeah, it's a huge, different experience for us. Definitely my favorite shows I've ever played have all been Massaoke shows.

Nilsson: We rely very heavily on the crowds, 'cause it doesn't work without them, whereas a normal gig you could put on with anyone there.

Morrisroe: If it's a great, great show, that's not just because of us, basically. It's because the audience have been up for it, and they've really gone for it, and they've had a great time. So it's not a passive thing, basically, like a lot of shows can be. We are making a show together.

Is it possible for a Massaoke audience to be too boozy? Is there an ideal level for being buzzed at one of your shows?

Nilsson: Funnily enough, we're up in Edinburgh at the moment for Edinburgh Fringe, and we've booked two weekends so far. And the Friday night crowds have been just about the right amount of drunk, and the Saturday night crowds have been just slightly too drunk. Presumably they've been going at it since lunchtime, whereas Friday they've only started at 6 p.m. Yeah, so I'd say, you know, two or three, or four.

Morrisroe: Merry. It's more the energy actually. Once someone gets too drunk, their energy level goes a bit too low.

Nilsson: And their ability to read the words on the screen as well.